As the GOAT, Serena Williams‘ net worth—and how much she makes from the Women’s Tennis Association, Nike and amore brands—has been a topic of interest for decades.

Serena, the daughter of Richard Williams and Oracene Price, was born on September 26, 1981, in Saginaw, Michigan. She has five half-sisters Yetunde, Lyndrea and Isha Price, and one full older sister, Venus Williams. When she was 4 years old, Serena’s family moved to Compton, California, where she started to play tennis. Serena’s family moved from Compton to West Palm Beach, Florida, when she was 9 years, so she and Venus could train under Rick Macci, the same tennis coach that trained players like Andy Roddick and Maria Sharapova. In October 1995, Serena competed in her first professional event for the Women’s Tennis Association at the Bell Challenge in Quebec.

Serena and Venus’ childhood and their father, Richard Williams, who served as their coach for most of their tennis careers, was the inspiration for the 2021 movie, King Richard, which starred Will Smith as Richard and Saniyya Sidney and Demi Singleton as Venus and Serena respectively. “There’s a scene where my dad says…” Serena told Entertainment Weekly in 2021 about King Richard. “Well, Will says that you’re doing this for every Black girl. And that really hit me in a different way because obviously at the time we didn’t know.” Serena also explained to EW why she and Venus wanted their father to be the focus of the movie, instead of them. “There are so many ways to tell this story. But I think telling it through my dad was the best way because he had the idea. He knew how to do it,” she said. 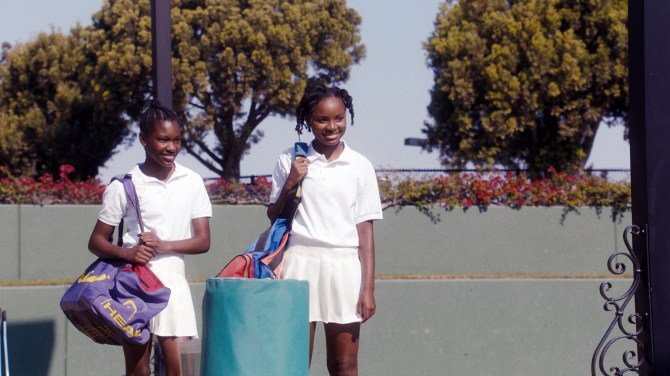 How much does Serena Williams make from tennis?

How much does Serena Williams make from tennis? Since she joined the Women’s Tennis Association in 1995, Serena has won more than three dozen Grand Slam titles and four Olympic medals. (She holds the record for the most Grand Slam titles in singles, doubles and mixed doubles among all active players.) According to the WTA, Serena has made $94,518,971 in prize money as of November 2021, which makes her the first rank in all-time earnings. (Her sister, Venus Williams, is second with $42,280,541 earned.) According to Essentially Sports, Serena earns around $8 million per year from just tennis.

As for what she did with her first tennis check, Serena told NBC News in 2020 that she put the amount in her bank to invest it over time. “When I received my first bit of prize money, I knew right away I needed to put it in the bank,” she said. “Though I had the money, what I didn’t have was the understanding of how it works. For example, what happens if you put money into a savings account, invest it, or just deposit it in a checking account? I didn’t learn those things until later in my career.” She continued, “However, as I matured. I realized that earning money is a reward, and those rewards have to be treated with the utmost care and consideration, and it is important to keep more of what you earn and make it grow for the future.”

How much does Serena Williams make from Nike?

How much does Serena Williams make from Nike? In 2003, Serena signed a five-year endorsement deal with Nike worth $40 million, according to the Associated Press and ESPN. The contract had an option for a three-year extension that would pay her $55 million if Serena hit certain performance incentives. The deal was the largest endorsement contract signed by a female athlete at the time.

The contract also came at the end of Serena’s deal with Puma at the time, which paid her $13 million for first five years of her career—less than a fourth of what she made from Nike. Antonio Bertone, the global director of brand management at the time, told The Undefeated in September 2021 that Puma tried to keep Serena as their ambassador at the time but were outbid by Nike. “At the time, we went as high as we could go for an athlete, knowing full well that Nike would outbid us,” Bertone said. “People nowadays have no idea about Serena and Puma.”

As part of her contract with Nike, Serena served as the brand’s face for their clothing, apparel and footwear. Nike also designed custom outfits and shoes that Serena would wear on the tennis court. “Don’t get in Nike’s space because they do it well!” she told CNBC in 2019. “Nike’s such an amazing leader in what they do.”

What is Serena Williams’ net worth?

So what is Serena Williams’ net worth? Serena is worth $210 million, according to Celebrity Net Worth, which includes the $94 million she’s made in prize money from tennis tournaments and the $55 million she made from her eight-year endorsement deal with Nike. Along with Nike, Serena has also had endorsement deals with brands like Gatorade, Delta Air Lines, Pepsi, Beats by Dre headphones, Chase Bank, OPI Products, Intel and more. She’s also the current Chief Sporting Officer for Aston Martin, a United Kingdom luxury automobile manufacturer, as well as serves on the board of directors for SurveyMoney, an experience management company now known as Momentiv.

In 2004, Serena also created her own fashion line, Aneres (her name spelled backwards). Five years later, in 2009, she launched a collection of handbags and jewelry, called Signature Statement, for the Home Shopping Network. She presented the collection at New York Fashion Week in 2014. In 2010, she also launched her own nail company called HairTech. In 2019, Serena created yet another fashion line called S by Serena that focused on sustainable clothing. The collection’s sizes ranged from XS to 3X and focused on inclusivity.

In an interview with NBC News in 2020, Serena opened up about what it’s like to be a million-millionaire after growing up with not much money. “My family wasn’t wealthy, but we were always taught that when you work hard, you reap the benefits as a result,” she said. “I think it’s important for young people to really understand how to spend money — including how to better self-evaluate needs and wants — to make truly informed decisions versus spending from pure emotion. This is still something that’s true for me, and an approach I believe is incredibly important for parents to teach and model, as well.”

She explained that her father, Richard Williams taught her and her sister, Venus, how to budget. “At a young age, it was instilled in me that I shouldn’t splurge,” she said.. “I remember going to parks and playing tennis with my dad and he’d say, ‘Athletes always lose their money.’ He made it clear that as an athlete, there was a risk of losing what you earned.” She continued, “I think this idea rings true no matter what you do. As a result, the concept of saving money stuck with me throughout my career. Even early on, I remained focused on the fact that when I earned money, I needed to be mindful of how those dollars were either spent, invested or saved.”

As for what she spends her money on, Serena told People in 2020 that she’s the “most boring spender,” but if she does splurge, it’s on her daughter, Alexis Olympia Ohanian Jr. “I don’t spend money—when I do it’s on my daughter. I usually invest my funds. I am the most boring spending ever,” she said. “Don’t spend it, invest it.”

She continued, “I am really bad at treating myself, so I am learning how to treat myself more. I am working on it. I’ve thought about some jewelry.”

In August 2022, Serena announced that she would be retiring from professional tennis after her last match in the 2022 US Open. “I have never liked the word retirement. It doesn’t feel like a modern word to me. I’ve been thinking of this as a transition, but I want to be sensitive about how I use that word, which means something very specific and important to a community of people,” she told Vogue at the time. “Maybe the best word to describe what I’m up to is evolution. I’m here to tell you that I’m evolving away from tennis, toward other things that are important to me. A few years ago I quietly started Serena Ventures, a venture capital firm. Soon after that, I started a family. I want to grow that family.”

She continued, “But I’ve been reluctant to admit to myself or anyone else that I have to move on from playing tennis. Alexis, my husband, and I have hardly talked about it; it’s like a taboo topic. I can’t even have this conversation with my mom and dad. It’s like it’s not real until you say it out loud. It comes up, I get an uncomfortable lump in my throat, and I start to cry. The only person I’ve really gone there with is my therapist! One thing I’m not going to do is sugarcoat this. I know that a lot of people are excited about and look forward to retiring, and I really wish I felt that way.”

Williams ended her Vogue interview by telling readers that she’ll miss tennis and tennis fans. “I’m not looking for some ceremonial, final on-court moment. I’m terrible at goodbyes, the world’s worst. But please know that I am more grateful for you than I can ever express in words. You have carried me to so many wins and so many trophies. I’m going to miss that version of me, that girl who played tennis. And I’m going to miss you,” she said.