She may not be Matt James’ winner, but fans have been interested in The Bachelor 2021 spoilers about Serena Pitt since she made her limo entrance on The Bachelor season 25’s premiere in January 2021.

Serena P. is one of 32 contestants who met Matt, a 29-year-old real estate agent from Raleigh, North Carolina, on the Monday, January 4, premiere of The Bachelor season 25. Matt, who is the best friend and roommate of Bachelorette alum Tyler Cameron, was announced as the season 25 Bachelor in June 2020. Unlike the previous Bachelors, Matt is the first Bachelor since Brad Womack in 2011 to not be a former Bachelorette contestant. (Though he was cast for Clare Crawley’s season of The Bachelorette in 2020, he never made it on the show, as he was chosen as the Bachelor soon after.)

Is Serena P. Matt’s Bachelor 2021 winner? Read on to find out that piece of information. What we can tell you now is that Matt’s winner was revealed by Reality Steve before the premiere of his Bachelor season. According to OK! magazine, the Bachelor producers are “livid” that Matt’s winner leaked before his finale, given the precautions that were put in place for his season.

“Everyone on the show has been reminded that they signed non-disclosure-agreements,” the source said. “The show’s PR department strategically leaks information and teases each season to get publicity and viewers excited. However, the number of unauthorized leaks has gotten out of control. To have the winner leaked before the first episode even airs is terrible. Producers are livid,” the source adds. 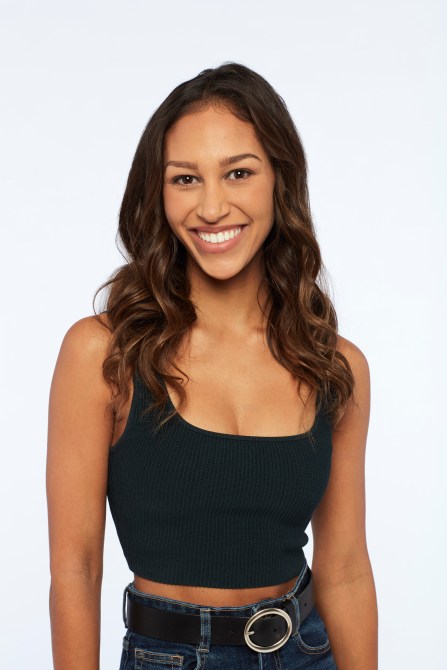 Who is Serena P.?

Serena P. is a 22-year-old from Toronto, Ontario, Canada. Serena P. is one of the youngest contestants this season, but according to her Bachelor bio, she’s believes that age doesn’t matter when it comes to finding the one. “For as long as she can remember, Serena P. has been a believer that no matter what your age is, when you know, you know,” reads her Bachelor bio. “Serena P. has always led a disciplined lifestyle and says she has never really taken the time to pursue true love, but now, this typically logical thinker is throwing her rulebook out the window and is ready to meet the man of her dreams. Serena P. is looking to find a man who will enjoy spending quality time with her—whether they are having beers at a low-key bar or sitting courtside at a Toronto Raptors’ game.”

Her Bachelor bio continues, “For her, it’s all about having fun and growing in life together. Serena P. needs a man with ambition who will be her teammate in life. He also HAS to be willing to share his food with her saying, ‘If they don’t let me taste their food, I don’t know if the relationship could survive.’ Serena P. knows true love is real but is waiting to find it, and she is hoping to experience that the second she meets our bachelor.”

For her fun facts, Serena P. lists the following:

– Serena P. would love to have a pet chicken so she could have a pet and an endless supply of eggs all in one.

– Learning how to change a tire is at the top of Serena P.’s bucket list.

What is Serena P.’s job?

According to her Bachelor bio, Serena P. works as a publicist,. Per her LinkedIn, Serena P. graduated from Wilfrid Laurier University in Ontario in 2019 with bachelor of arts in communication studies and business management. As of August 2020, she worked as an intern at MacIntyre Communications. Along with her current internship, Serena P. has also been a brand ambassador for Cotton Candy Event Staffing Inc., as well as been an intern for LOCAL Life magazine in South Carolina.

Does Serena P. win The Bachelor?

(Spoilers ahead.) So…does Serena P. win Matt’s season of The Bachelor? Well, sorry to break it to you Serena P. fans, but she does not. Serena P. eliminated herself on the February 22 episode of The Bachelor. Serena P. sent herself home after her Hometown Date with Matt, where he met her family. In the episode, Serena P.’s sister tells her that she doesn’t look “smitten” with Matt, which makes her question their relationship. Serena then has a conversation with Matt where she expresses her doubts. His response doesn’t calm her nerves, but the hug and part ways.

Matt then has a conversation with Chris Harrison about how he doesn’t know where Serena P.’s head is at and if she likes him the same amount as he likes her. That leads Matt to visit Serena P. in her room before that night’s rose ceremony. During their conversation Serena P. tells Matt that she’s realized he isn’t her “person” and isn’t ready to be engaged to him. Matt, who didn’t expect Serena P. to break up with him, then asks her to walk him out.

The rest of the women Matt’s final four are Serena P., Bri, Michelle and Rachael, who all receive roses at the rose ceremony after realizing that Serena P. was no longer on the show. Per Reality Steve, they’re eliminated in that order, which means that Serena P. is eliminated before Fantasy Suites and Rachael is Matt’s winner.For more detailed spoilers about Matt’s winner, click here.

Is Serena P. still single after The Bachelor?

After she won over the hearts of Bachelor Nation, fans want to know if Serena P. is still single after The Bachelor. It’s hard to say, but it looks like she is. (Do we sense a future Bachelorette?) At the “Women Tell All” special after her elimination, Chris Harrison asks Serena P. if if she’s ever thought she made a mistake by breaking up with Matt. Serena P., who looks emotional during the interview, takes a moment to think, which makes us think that she isn’t dating anyone new and is still recovering from her split with Matt.

On Valentine’s Day 2021, Serena P. also posted an Instagram photo of her and heart cookie with the caption, “Hope you all felt the love today ❤️.” Though she didn’t reveal her relationship status in the post, the Instagram also made fans think that she’s still single after her breakup with Matt. After Serena P.’s final episode, her sister, Talia, took to her Instagram to talk about how courageous her sister was for following her heart and knowing that her relationship with Matt wouldn’t work. “Jokes aside, the courage it takes to follow your heart with a million judging eyes on you is unparalleled. You are a role model to many but first and foremost you are a role model to me🤍🤍,” she wrote.