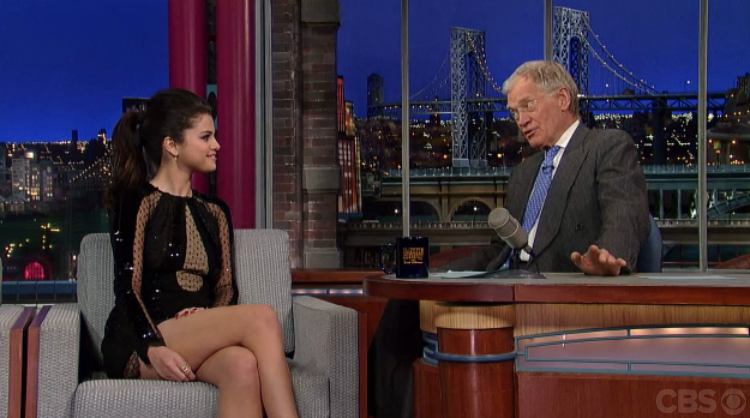 Although there have been some serious fashion faux pas throughout the “Spring Breakers” press tour, Selena Gomez has always been on trend and chic—as evidenced by her Dolce & Gabbana bustier and orange skirt at SXSW. Her latest fashion win? Last night on “The Late Show with David Letterman” in a black Emilio Pucci dress with sheer panels from the label’s Fall 2013 collection, which the 20-year-old paired with black Brian Atwood pumps, and topped off with a sleek ponytail.

The highlight of the interview, however, wasn’t the outfit, but the exchange Gomez had with Letterman about her ex-boyfriend Justin Bieber.

After the actress revealed to the host that she was single (neither she nor Bieber had previously confirmed the break-up), Letterman joked that he once made Bieber cry when he appeared on the “Late Show.”

“Well, then that makes two of us,” Gomez cheekily responded, prompting cheers from the audience and a fist bump from Letterman.

While we thought the lighthearted dig at Bieber, 19, was a good move for Gomez, who’s clearly trying to distance herself from all things teenybopper, it seems The Biebs’ crazed fans (Beliebers, for the uninitiated) immediately took to Twitter and slammed Gomez for her comment. To that, we can only say one thing: relax.

What do you think about Selena Gomez’s Pucci dress and her comment about Justin Bieber? Let us know in the comments section below!