While there are plenty of relationship rumors making the rounds on social media, some are simply too juicy to ignore—and those reports about Selena Gomez and Chris Evans dating are one of them.

Fans haven’t stopped talking about Selena and Chris ever since the pair first started sparking dating rumors, and it’s easy to understand why. I mean, what are the odds that the Rare Beauty founder would end up dating Captain America himself? How does one casually meet and strike up a romantic relationship with an Avengers actor? And, perhaps more importantly, is Chris a secret fan of Selena’s new show, Only Murders in the Building?! Obviously, there are many questions involved when it comes to Chris and Selena’s rumored relationship—and hopefully, we can answer some of those for you below.

As a refresher, Selena hasn’t been publicly linked to anyone since The Weeknd in 2017 and her ex Justin Bieber, whom she dated briefly in 2018 after being on and off since 2010. In 2021, however, the Wizards of Waverly Place alum sparked dating rumors with her Hulu co-star, Aaron Dominguez, but she swiftly denied the speculation.

“We had just started working together,” Selena told the Los Angeles Times in an interview published in March. “I honestly thought, ‘No wonder guys don’t want to date me!’ I think people only care because I’m young, and the older I get the less they’ll care. For now, it’s a part of the job that I don’t really like.”

The “Lose You to Love Me” singer went on to reveal that she was “not involved with anyone” at the time, meaning that her rumored relationship with Chris would have started sometime after March 2021. So, when exactly did fans first start seeing signs of romance between Selena and Chris? Keep on reading below for everything we know so far.

On November 13, Selena’s best friend, Taylor Swift, posted a TikTok video of them backstage at Saturday Night Live. When the camera panned to Selena, the former Disney Channel star could be seen in a white cable knit sweater similar to the sweater worn by Chris in 2019’s Knives Out. “UHM WHY DOES SELENA’S SWEATER REMINDS ME OF THAT KNIVES OUT SWEATER WORN BY CHRIS EVANS???” one Twitter user wrote. Another added, “OHH MY GODDDD you guys Selena’s wearing Chris Evans knives out Sweater.” 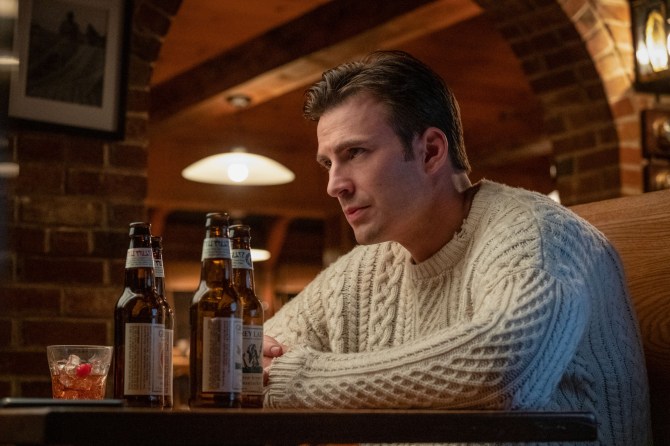 After Chris posted an Instagram Story video of him playing “Purple Rain” on the piano on October 26, rumors swirled that a brunette woman who could be seen on the bottom left corner of the video was Selena. “Is that Selena?!” TikTok user @girlgangz773 captioned a repost of the video. The user added, “Whose [sic] the brunette filming bottom right corner Chris?”

In the comments of the TikTok, other users noted that they “never noticed” there could be someone with Chris in the video, while others explained that the “person” was just the lid of the piano. “Its [sic] called the piano lid. You know the thing that covers the keyboard,” one user wrote. However, there were others users convinced that someone was leaning on the piano. Another fan noted that Selena “recently cut her hair,” so if the person was her, her shorter bob would’ve been reflected.

October 2021: Selena & Chris Are Seen at the Same Restaurant

“If Selena Gomez is really dating Chris Evans that gives me so much hope about going from toxic boys to a DAMN MAN,” one fan tweeted in response to the rumors. Another wrote via Twitter, “BRO I AM NOT MAD ABOUT THIS RUMOR SELENA GOMEZ AND CHRIS EVANS ARE SUCH A POWER COUPLE.” A third fan echoed this sentiment, tweeting, “Honestly if someone was going to date my man chris evans then I’m glad it’s Selena Gomez.”

Not long after the photos of Chris and Selena leaving the restaurant were posted online, eagle-eyed fans also noticed something surprising over on Instagram. It appeared that Chris had suddenly started following the “Baila Conmigo” singer. While this might not normally mean much, it’s worth noting that Chris follows less than 200 people on Instagram—so, clearly, he puts some thought into who he decides to follow on the platform.

October 2015: Selena Admits She Has a Crush on Chris

Long before Selena and Chris first sparked dating rumors, the Disney Channel alum actually confessed that she had a “crush” on the Captain America: The First Avenger star during an appearance on Watch What Happens Live With Andy Cohen.  “I kind of have a crush on Chris Evans. Isn’t he cute? He’s very cute,” Selena said at the time. Andy Cohen went on to note that Chris’ brother, Scott Evans, had recently bartender on WWHL, to which Selena responded, “Really? Last week? Maybe it’s meant to be.” Maybe, Selena!