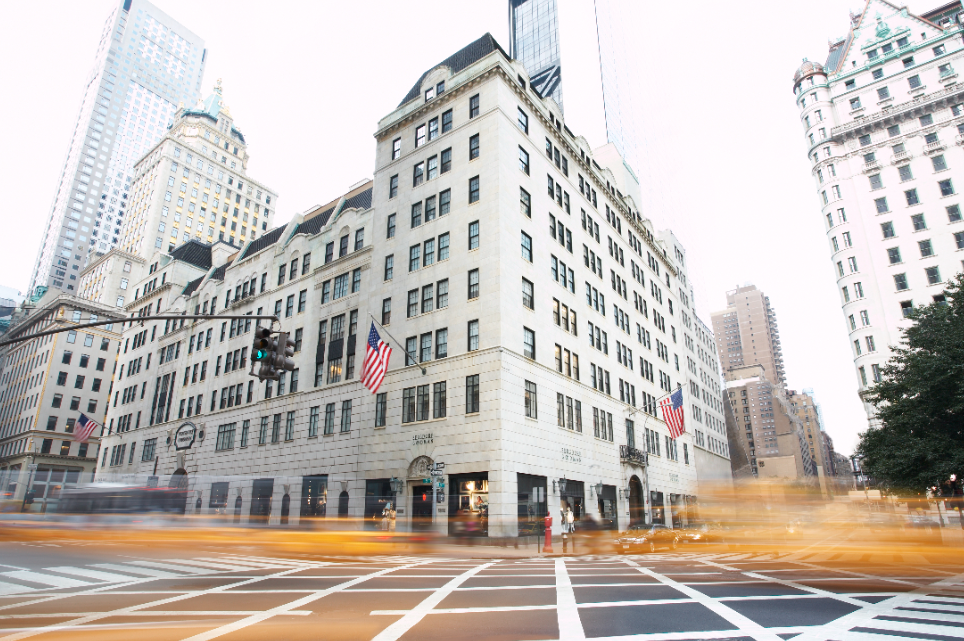 Bergdorf Goodman is one of the world’s premiere shopping destinations—and it’s also a total New York City institution. The department store is in the spotlight in a major way recently thanks to the documentary “Scatter My Ashes at Bergdorf’s,” which is being released today. Featuring a slew of cameos from Mary-Kate Olsen to Marc Jacobs, the film recounts people’s favorite Bergdorf’s memories, as well as sheds some light on the store’s rich history.
In honor of the film, we decided to compile a list of things you probably never knew about Bergdorf Goodman. Read on for more!
1. The John Barrett Salon used to be a swanky penthouse apartment. These days, ladies who lunch flock to John Barrett to deal with all their haircare needs—but it actually used to be the apartment of Edwin Goodman (the store’s founder), and then it was passed on to his son Andrew and his family. The glamorous apartment had 17 rooms, and was converted to the salon following Andrew’s death.
2. Bergdorf Goodman used to throw lavish fashion shows. While many designers have shown their collections at Bergdorf’s—John Galliano memorably presented in the penthouse in 1996 right before it became the salon—it’s nothing like how it was in the old days. Back in 1981, the store organized a show for Fendi furs at the nearby Pulitzer Fountain. The fountain was the runway, and the tiers were lined with black Mylar and filled with gallons of water. It didn’t go off without a hitch—it was pouring rain all day, but it stopped briefly for the fabulous furs to be displayed.
3. Bergdorf Goodman and Neiman Marcus are sister stores, both owned by the Neiman Marcus Group. Many people are baffled as to why Neiman Marcus doesn’t have an outpost in New York City—but that’s because they’re basically the same store! They have been affiliated since 1972.
4. There used to be another Bergdorf Goodman location in White Plains, New York. While Neiman Marcus has many locations, Bergdorf’s only has one—but they did open an outpost in Westchester back in 1972. It was ultimately nowhere near as successful as the Manhattan branch for whatever reason, so in 1981, they changed it to a Neiman Marcus. It worked—and it’s still one of the most popular shopping spots in the area today.
5. Elizabeth Taylor once custom-ordered 200 pairs of white mink earmuffs. She made an appointment at the fur salon in the early 1970s, and stated that she needed 200 white mink earmuffs for everyone on her Christmas list. The real kicker? She was leaving for Gstaad in a week—and needed them before then!
6. John Lennon and Yoko Ono spent $400,000 on furs—on Christmas Eve! In the late 1970s, fur buyer Jack Cohen was called to the Dakota on Christmas Eve at 4 p.m. by Yoko Ono who demanded he bring tons of options. Cohen’s trip paid off—they bought $400,000 of furs for friends and family—and of course, a lot for Yoko.
7. Former Bergdorf Goodman CEO Ira Neimark tried to put a Cipriani restaurant on the seventh floor in 1984. Although Cipriani is a New York institution now with multiple locations, it wasn’t always that way. In fact, Ira Neimark is responsible for bringing it to the US after having a fabulous meal at its original outpost Harry’s Bar in Venice. The chic restaurants in the area were dwindling, and high powered fashion folk like Giorgio Armani liked going downtown. Neimark saw a void in the market and pleaded with Arrigo Cipriani to open a restaurant in the store. He said no, but then stated that he would open a restaurant in the Sherry Netherland—directly across the way. It became a staple for Bergdorf’s customers and executives alike.
8. Bergdorf Goodman’s sales are $600 million annually. These days, Bergdorf Goodman makes about $600 million annually—making it one of the most successful single stores in the US.
9. The store is 190,000 square feet. Bergdorf Goodman spans a whopping 190,000 square feet over nine floors. In 1990, the men’s store was moved across the street to make more room for women’s fashion.
10. Bergdorf Goodman is responsible for Michael Kors’ career. When a young Michael Kors showed fashion director Dawn Mello his first collection in 1981, she knew he was special—so much so that she offered him the opportunity to sell his first collection exclusively at Bergdorf Goodman. The rest is history!
Photo via Cityist