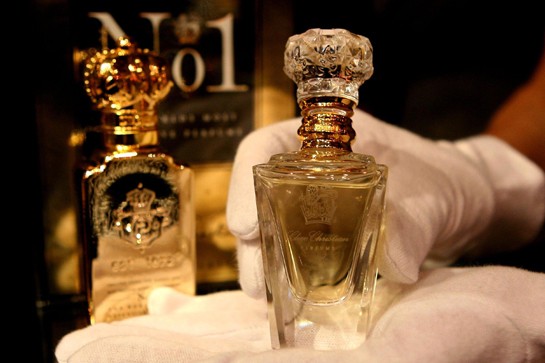 In the oversaturated fragrance market, it’s increasingly difficult to stand out. There’s the designer market, dominated by brands like Chanel and Dior, and of course the quickly growing celebrity market, where stars like Christina Aguilera and Kim Kardashian have found considerable success. And then there’s the unique specialty market—which is where Clive Christian comes in.
We recently visited the Clive Christian showroom to spend the morning with Victoria Christian (Clive’s daughter), who has become the brand’s ambassador. The raven-haired beauty with a penchant for alligator handbags ditched a career in theater to travel the world for her family’s brand, and you can see why. She spoke passionately about the perfume, but wasn’t afraid to crack a few jokes with us—particularly when it seemed like we lacked extensive knowledge of British history. The showroom, off of Fifth Avenue in New York City’s tony Upper East Side, is decorated entirely in bespoke furniture and looks more like Brooke Astor’s apartment than an office space, making it the perfect setting to learn about the world’s most expensive perfume brand.
How It All Began: Clive Christian got involved in the fragrance business entirely by accident. Hailing from Britain, Clive purchased a manor house in Cheshire back in 1978 and quickly fell in love with interior design. Subsequently he launched a line of bespoke furniture sold to this day at luxury retailers like Harrods. Rummaging about the estate one day Victoria and her father discovered an original bottle of perfume dating from the 1800s created by the Crown Perfumery, a favorite of Queen Victoria. Discovering that Crown Perfurmery had seen better days, Clive took the reins, looking to revive the brand—and in 1999, the world’s most expensive perfume was born.
Clive Christian’s Offerings: There are five perfumes under the Clive Christian umbrella—No. 1, 1872, X, C and V (named for Victoria). “No. 1 is the world’s most expensive perfume, and it really stands as the jewel in the crown of the collection,” Victoria explained. 1.6 oz (50 ml) of the perfume will set you back $865. “This is a heritage brand and you can’t cut corners.” 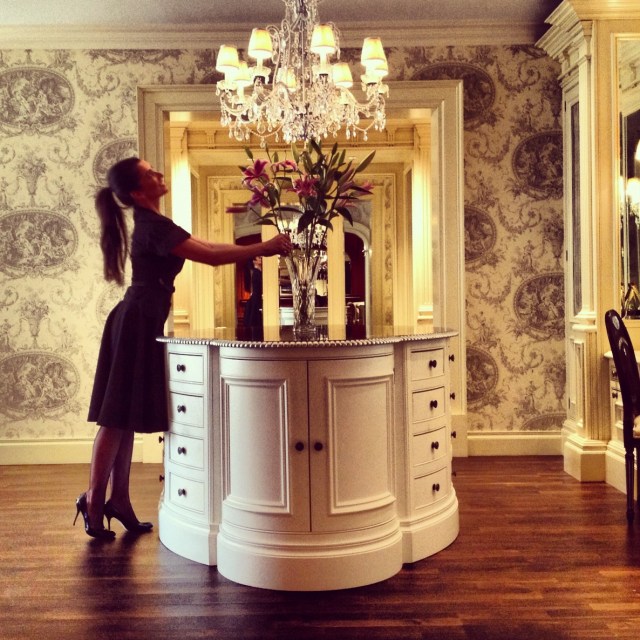 Victoria at the New York showroom

Why It’s So Expensive: “In perfume terms, what quality means is concentration,” Victoria explained. “In a nutshell, concentration is judged by…the duration of time that it actually lasts on your skin. Quite frankly, I think that it’s probably the most luxurious because it’s absolutely invisible. It sits closer to your skin than lingerie, couture or jewelry,” she said.
What Sets It Apart From Brands Like Chanel: While many consumers opt for a slightly cheaper luxury fragrance, there are key differences. “There are many lines in the sand drawn to make the perfume industry mass market, like Chanel No. 5,” Victoria said. “Her design was so that more people could buy fragrances to take home to their wives in America—or so soldiers could take a fragrance home that wasn’t too expensive. It’s a fantastic fragrance, but what Clive did is re-draw the line in the sand. He said, ‘Okay, that’s brilliant. You can have all of that available everywhere, but where is the other end of the spectrum? Where is the real perfumery?’ This is a heritage brand that lay dormant for 80 years, aside from a few attempts by retailers to make a quick buck. That’s not our philosophy. We are the bespoke equivalent of the perfume industry, while many others offer off-the-rack.”
Why It’s Worth It: Obviously, Victoria and everyone else working with Clive Christian think the price is worth it for one of the brand’s scents. So does Katie Holmes—the actress wore No. 1 at her lavish nuptials to Tom Cruise—but we wanted to investigate it for ourselves. We tried every single fragrance option Clive Christian has to offer (yes, No. 1 is undoubtedly the best)—and came away with these thoughts. The difference between perfume and cologne (Victoria likened cologne to a cheap fix) is very apparent. Perfume isn’t about an overbearing scent, it’s about longevity. Even after showering multiple times, the Clive Christian scent remained attached to our skin in the most subtle way. Top notes of No. 1 include everything from pineapple to bergamot to pimento oil and base notes include crystallised Tahitian vanilla, benjoin balm, and Cedarwood (which seems to make up the bulk of the scent). Its a dreamy concoction if we do say so. 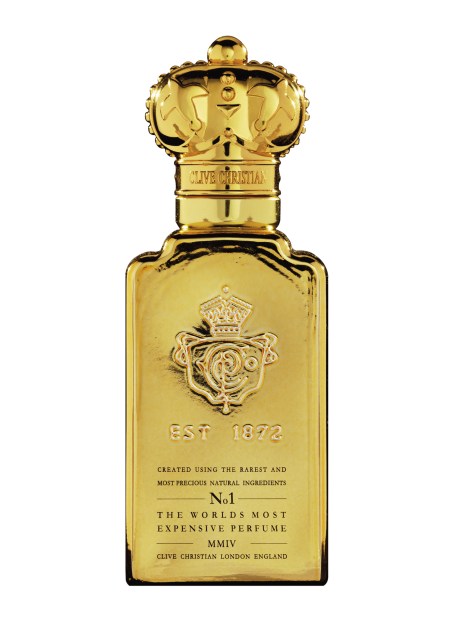 Available at luxury retailers worldwide (Bergdorf Goodman, Harrods, and Neiman Marcus), Clive Christian is never going to be the most popular brand out there thanks to its hefty price tag—but it will certainly be one of the best.