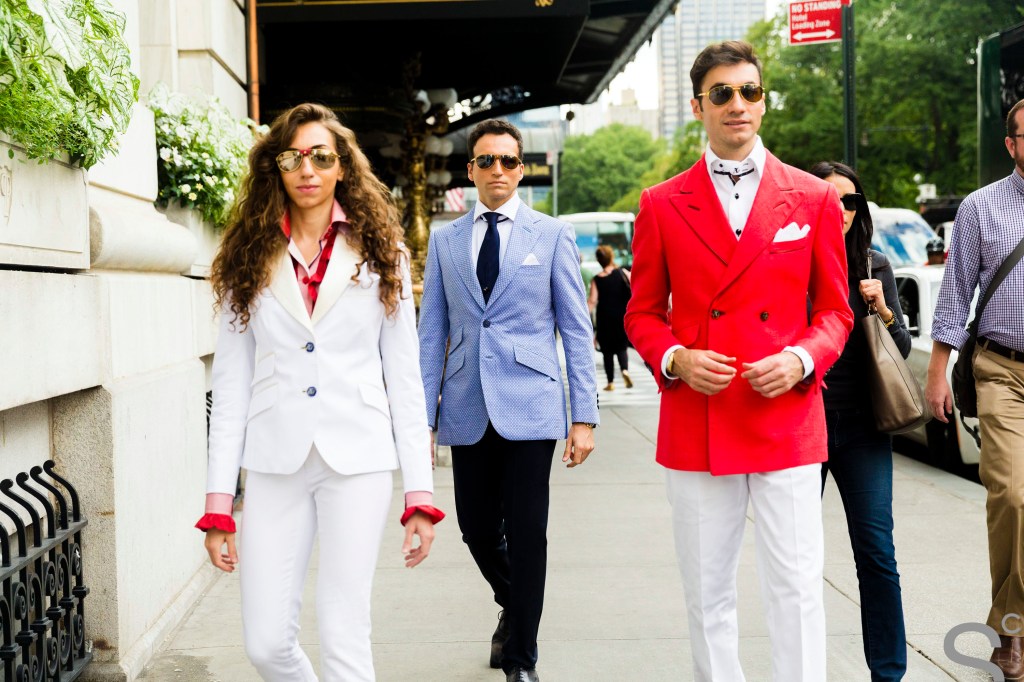 The Carpenter family is on a mission to give the classical music world, and the fine instruments that accompany it, a much-needed image makeover. Though these three siblings—Sean (center) and Lauren (left) are both talented violinists, and David (right) is a gifted violist—carefully stress that the music and its quality will always be their primary concern, they’re also quite aware that it’s the image that makes the show.

Thus, they perform at some of the world’s top venues, like Carnegie Hall and The Metropolitan Museum of Art (coming up on October 23), in labels like Roberto Cavalli and J. Mendel.

“We’re not trying to be Maroon 5, but we realize the reason someone like Katy Perry sells tickets is because she really puts on a show that’s visually entertaining, and there’s a great performance value there,” says Lauren. The trio has also expanded beyond classic concert halls to perform with talents like John Legend, and they performed at Rufus Wainwright’s wedding in front of Yoko Ono and Sean Lennon, among others.

“It would be a dream to play at a Victoria’s Secret show,” says David, the youngest of the three.

When they aren’t onstage, they’re scouring the globe for rare stringed instruments on behalf of Carpenter Fine Violins, the company they launched in late 2009. For the uninitiated, that means tracking down something like an extremely rare Stradivari violin, which starts around $5 million and can run upwards of $15 million—and they are definitely shaking things up in their industry.

These days, some of their instruments are on display at the Met, and the siblings are the focus of a documentary coming out this fall, which could potentially make its debut at the Sundance Film Festival. As an indication of their success, the three Carpenters have become avid collectors in the art world, acquiring major postwar contemporary pieces.

Many of the pieces are on display at their joint home along Central Park at the famed Plaza hotel—yes, they live at the Plaza. (Rebecca Mead of the New Yorker once described this ambitious trio as having “an air of fictional implausibility, as if they had been imagined into being by Wes Anderson.”)

“At the end of the day, we just want to be the best at what we do and work with the best people. I think that should translate to every aspect of your brand, even how you present yourself to the instruments; it should always be the best quality,” Lauren says.

It would take a novel to do these three proper justice, but until then, here’s a short snippet from our conversation at their stunning home at the Plaza.

Lauren: Sometimes we color coordinate. The New Yorker article on us recently described us as looking like we walked out of a Wes Anderson film, which was kind of funny. But a lot of people in the classical music world don’t recognize how visual this is. I often perform in J. Mendel or Cavalli dresses, whatever is comfortable and works nicely.

What are some of your favorites stores in the city?
David: Angelo Galasso is conveniently located downstairs from our apartment. It’s a little more expensive than Berluti. We have a major collection of [Galasso’s] stuff. We also used to be some of Roberto Cavalli’s best clients. If we had a concert, we would wear only Cavalli. Now we are really into Galasso—it has that edge you need when you are performing in front of thousands of people in Carnegie Hall.

You’re collectors of very fine things, from instruments to art to fashion. What item in your closet is most meaningful to you?
David: I love this Rolex watch [I’m wearing]. It was given to me by the previous CEO of Rolex, Patrick Heiniger, who passed away recently.

What do you like about New York City style?
Lauren: It’s like a quilt, almost. The diversity is incredible; I hardly ever hear English. It’s a rainbow of fashion and style. You go to the Meatpacking District and you feel like you’re on a catwalk. New York style is almost schizophrenic. I love that we could reinvent ourselves on any day, at any point, and that would be pretty natural.