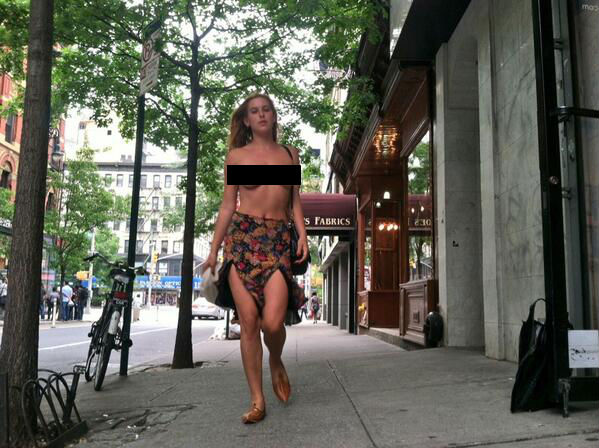 Instagram has been coming under fire of late for its policy against nudity—in particular, its habit of booting popular users like Rihanna off its service for violating said policy. Even Vogue Creative Director Grace Coddington wasn’t exempt: her account was temporarily suspended after she posted a cartoon depiction of herself—a cartoon!—lounging naked in a beach chair.

Well, Scout Willis ain’t having it. The 22-year-old daughter of Demi Moore and Bruce Willis decided to protest Instagram’s policy by walking topless around the streets of New York—which, incidentally, is not breaking any city laws (aw yeah NYC!).

After Instagram removed another of her posts that it deemed to be in violation of its guidelines, she decided to act, and posted the evidence on Twitter.

Needless to say, the Internet pretty much erupted, and Willis quickly began stoking the flames against Instagram by posting statements under the hashtag #FreetheNipple. Jezebel put together a nice round-up of Willis’ previous tweets that demonstrate that the whole boobs-on-Instagram issue has been on her mind for some time. Considering Instagram has also reportedly deleted photos of breast cancer survivors and mothers breastfeeding, it’s safe to say that Willis has some ammo to her argument.

After about 24 hours, Instagram responded to Willis, explaining the company’s reasoning and offering to reactivate her account … without the offending photos. Willis, of course, posted the service’s entire response on Twitter. Here’s an exerpt:

We love that people use Instagram to express themselves artistically and to capture important moments of their lives, and we’re glad to hear that you are as well. Please note however that we prohibit all forms of Nudity on Instagram because some audiences within our global community are particularly sensitive to this type of content.

I know that, in certain situations, these policies may seem overly strict. However, in order to treat people fairly and respond to reports quickly, it is particularly important that we have policies in place that our global teams can apply uniformly and easily when reviewing content. As a result, our policies can sometimes be more blunt than we would like. We are constantly re-evaluating how to balance allowing people to express themselves creatively with the needs of our diverse, creative community.

By late Wednesday, Willis’ Instagram account had been officially reactivated, but she wrote on Twitter, “They gave it back, but I don’t want it.” By the end of the night, she’d deleted the account herself.