Lord Disick has jokes. Scott Disick reacted to Kourtney Kardashian wearing his shirt and those dating rumors by trolling fans who think they’re back together. A week after Kourtney posted an Instagram photo of her in her ex-boyfriend’s flannel, the Poosh founder took to her social media again on Monday, June 22, to post another photo of her in one of Scott’s shirts.

The picture showed Kourtney in the desert in an oversized yellow flannel, which she wore over an all-white outfit that consisted of a white turtleneck, skirt and knee-high boots. “DESERTed,” Kourtney captioned the photo, which was taken on her recent vacation in Wisconsin with her kids, Scott and her sisters, Kim Kardashian and Kylie Jenner, and their families. Kourtney also shared three more photos of of her in the outfit, which were taken by her 5-year-old son Reign in a barn.

The photo of Kourtney in what looked like Scott’s flannel came after weeks of rumors that the two are back together after the Flip It Like Disick star’s recent breakup from Sofia Richie. While Kourtney and Scott have been hush-hush about rumors that they’re dating again after their breakup after almost of on-again, off-again dating in 2015, Scott teased fans in a recent Instagram comment who think that Kourtney wearing his clothes mean that they’ve rekindled their relationship.

“Cute shirt,” Scott commented on the photo of Kourtney wearing the yellow flannel, which is from the brand Outer Known and retails for $148, so you can recreate Scott and Kourtney’s look too. 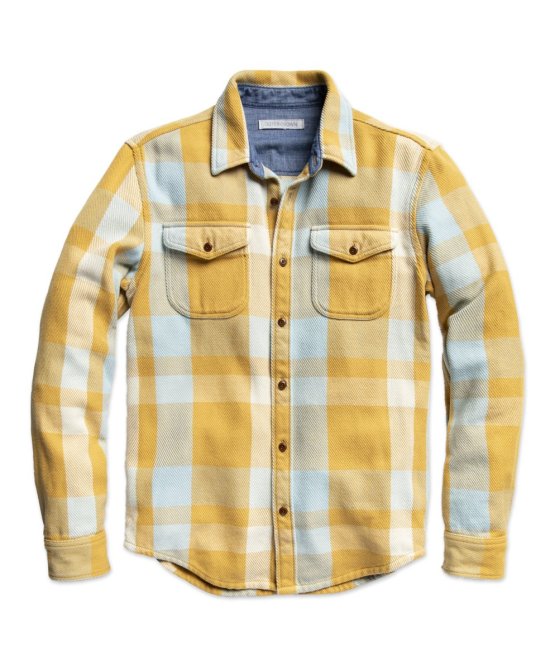 Scott’s comment comes after Kourtney first posted a photo of herself in her ex-boyfriend’s flannel in an Instagram post on Sunday, June 14. The picture showed Kourtney in a blue and white flannel as she held a baby goat. After an investigation, internet sleuths discovered that Scott wore the same shirt on a 2017 date with Sofia.

As for if Scott and Kourtney are really back together, don’t get your hopes up. A source told HollywoodLife in May that, while Kourtney and Scott are in a good place as co-parents, Kourtney isn’t in the place to take him back as anything more. “Kourtney also has love for Scott, but again, not in a romantic way. They care about the other very deeply, but the romantic feelings between them are not there,” the insider said at the time. “They look at each other like any exes who were together for years and and broke up would, except they’re in a great place. Scott is always going to be family and Kourtney will always be there for him.”