Weekday getaway. Scott Disick reunited with his kids after Kourtney Kardashian’s wedding to Travis Barker. During the nuptials, the Talentless founder took a solo weekend vacation without his kids, but he was very happy when they were finally all back together.

Scott posted several photos of him and his kids Mason, 12, Penelope, 9, and Reign, 7, on his Instagram story on May 4, 2022. He first posted a photo of his son Reign sleeping with the caption, “I got my baby.” He then proceeded to take a blurry selfie with his eldest children Mason and Penelope. The caption read, “Got my crew with me.” Penelope was then featured in two other stories, where Scott boasted, “My little girl is getting so big I can’t take it!”

Scott took a vacation while his kids were gone at their mother Kourtney’s wedding in Italy on May 21, 2022. Scott was reportedly not invited to the Italian wedding. The Keeping Up With The Kardashians alum posted a picture of an airplane on his Instagram story, “Where 2?” He followed up the story with another photo on the plane captioned, “Next stop, the beach.” However, PageSix reported that the Flip it Like Disick star actually went to New York City and stopped by Sapphire Strip Club during his duration in the city. 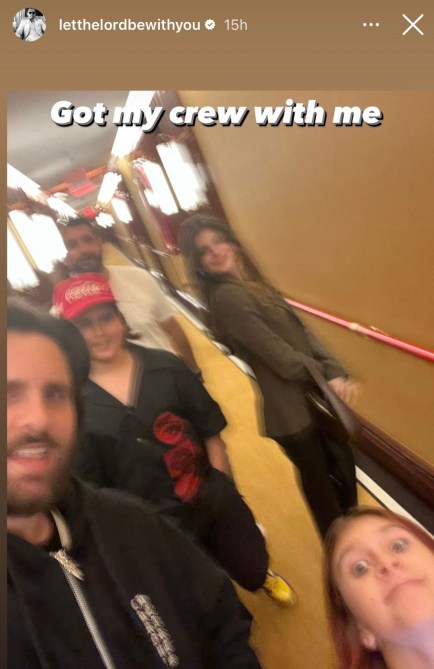 Kourtney and Scott’s kids notably did not attend their mom’s first two wedding ceremonies with new stepdad Travis Barker. Kourtney had an unofficial wedding in Las Vegas on April 3, 2022 where only a select few attended. The Poosh founder finally had an official wedding in a courthouse in Santa Barbara, CA on May 15, 2022, before their big iconic wedding in Italy. The two had an extravagant wedding on May 22, 2022 in Portofino.

Travis proposed to Kourtney in October 2021. Her family was in attendance, however, her kids were not. “I do wish that my kids were here,” Kourtney said during an episode of The Kardashians. “I think it would have made them feel more included in the decision, kind of, and like part of the surprise. I know that my mom made that decision and it probably wasn’t her best.”