On this episode of wild-AF celebrity rumors: Scott Disick and Bella Thorne are reportedly getting their own reality show. (Join us in scratching our heads.) Yup. The rumor mill is at full-speed and churning out talk that the 36-year-old playboy and the 19-year-old actress are in the works for their very own docuseries centered on their partying lifestyles. (Sounds…riveting.)

MORE: Bella Thorne Finds Comfort in Ex Gregg Sulking After “She Got Played” by Scott Disick

Though Scott has been a regular on “Keeping Up with the Kardashians” for nearly a decade, the E! personality is reportedly looking to branch out with his own “KUWTK”-style spin-off. The rumors, originally reported by Life & Style, claim that Scott is looking for Bella to star in a joint reality show with him about how the two are super cool cats partying in L.A. (Emmy-worthy, we’re sure.) According to Life & Style‘s source, Scott’s already written a pitch and is pretty much ready to go.

“Scott’s written a synopsis for a reality show based around him and Bella hanging out and partying together at clubs,” the source said.

Though the tabloid reported that the dad-of-three’s ex, Kourtney Kardashian, is less than fond of the idea, it seems that Bella is more than game to get her reality TV career started. Per the sources, the “Famous in Love” star is looking to expand her social media following, and what better way to do that than to follow in the Kardashian family’s footprints?

“She already has a huge social media following,” the source said. “But she wants even more, and Scott’s promising her that won’t be a problem.” 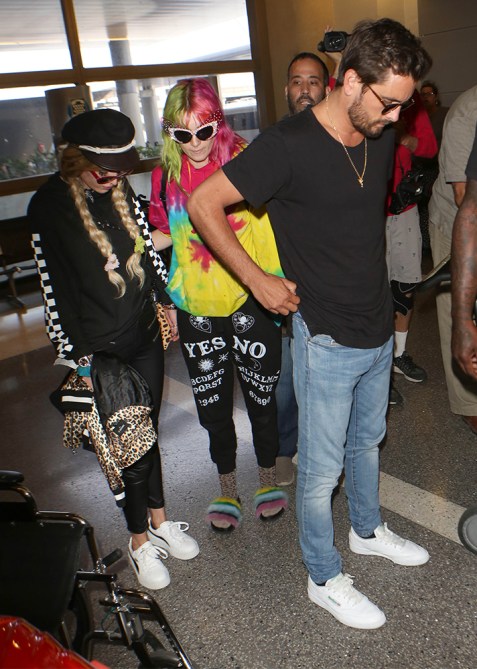 As for why a spinoff now, the source claims that Scott really just wants a higher profile outside of the Kardashian family’s shadow.

“He’s tired of having to depend on the family for publicity,” the source said. “He’s ready to take matters into his own hands.”

If you’ve been out of the loop, Scott and Bella have been casually seeing each other as *friends* since the beginning of this summer after they were spotted getting cozy aboard at yacht in Cannes in May. Though the former Disney Channel star shut down rumors that the two were anything more than buddies on Twitter, they’ve remained partying partners, with frequent outing around Los Angeles. (It also appears that Bella might be back with her ex, Gregg Sulkin, so there’s more evidence that Scott’s reported reality show might be more friendly than romantic.)

But back to the show: TBH, if it is true, it sounds like a hot mess that will never make it off the ground. That being said, will we watch it? Absolutely.