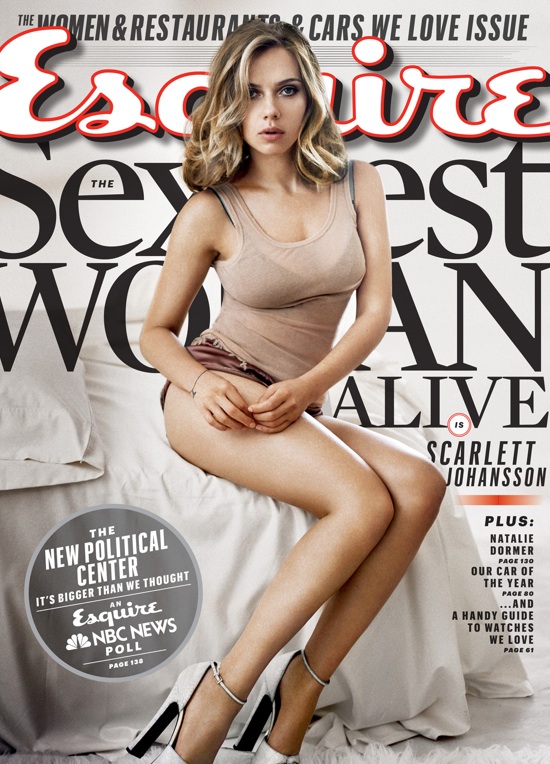 She nabbed the title of Esquire‘s sexiest woman alive in 2006, and now Scarlett Johansson has earned the spot again, making her the first gal to score the honor twice. (Last year, just for reference, the title went to Mila Kunis—‘member her?)

In the issue, the 28-year-old—who recently got engaged to former French journalist Romain Dauriac—talks relationships, or more specifically, jealousy, which she says “comes with the territory” of dating a Frenchman.

“I didn’t think I was a jealous person,” she says, “until I started dating my current, my one-and-only. I think maybe in the past I didn’t have the same kind of investment. Not that I liked my partner less, I just wasn’t capable of it or caring that much.”

While we’re no detectives, we’re assuming ScarJo is largely referring to her ex-husband Ryan Reynolds, from whom she split in 2010 (and who’s now enmeshed in marital bliss with Blake Lively.)

Scarlett also open up a about her career, coming off her busiest year to date.

“I’m exhausted and this is my last day in the world,” she told the magazine during the interview. “This is the last day, and this is the last piece of work. Then I’m taking a month-long vacation. But I’m not going anywhere, which just makes it more of a staycation. There’s luxury in being near home. When you spend a lot of time, like I do, just standing around and waiting, or being moved from place to place, every minute gets consumed by something someone else has set up for you.”

When the interviewer asks her why accepted the title Sexiest Woman Alive gig if everything is so busy just now? “I’m the only woman to win it twice, right?” she said.

The actress also touched on what’s coming up, career-wise. “You know, I gotta hustle. I’m a twenty-eight-year-old woman in the movie business, right? Pretty soon the roles you’re offered all become mothers. Then they just sort of stop. I have to hedge against that with work—theater, producing, this thing with Esquire.”

Head on over to Esquire now to read the full story and to see all the images, and let us know: Do you think Scarlett Johansson is the sexiest woman alive?