As one of the Avengers, fans can expect that Scarlett Johansson‘s Black Widow salary is massive. How massive? Well, she’s the second-highest paid Marvel star ever.

ScarJo joined the Marvel Cinematic Universe as the Black Widow a.k.a. Natasha Romanoff in 2010’s Iron Man 2. Since then, she’s starred in eight other MCU movies, including 2012’s The Avengers, 2014’s Captain America: The Winter Soldier, 2016’s Captain America: Civil War, 2018’s Avengers: Infinity War and 2019’s Avengers: Endgame. (She also made a cameo in 2019’s Captain Marvel.) In July 2021, Johansson starred in her first solo Marvel movie, Black Widow, which is set after the events of Captain America: Civil War and explores Natasha’s past as a spy and how it affects her in the present.

As Marvel fans know, Natasha dies in Avengers: Endgame after she sacrifices herself for the Soul Stone. In an interview with Fatherly in July 2021, ScarJo confirmed that she had officially retired from the MCU after Black Widow. “I have no plans to return as Natasha,” she said. “I feel really satisfied with this film. It feels like a great way to go out for this chapter of my Marvel identity.”

Though she doesn’t plan to play Natasha again, Johansson hinted that she would like to work with Marvel behind the scenes. (Johansson also serves as an executive producer on Black Widow.) “I would love to be able to continue to collaborate with Marvel in other ways because I think there’s just an incredible wealth of stories there,” she said. “Reimagining this genre is something that I find very interesting. I think there’s a lot of opportunities to tell these stories in different ways than audiences have come to expect.”

However, that seemed to change in July 2021 when Johansson sued Disney, which owns Marvel, for breaching their contract by streaming Black Widow on Disney Plus and not debuting it exclusively in theaters. According to a lawsuit filed in Los Angeles Superior Court, Johansson’s attorneys claimed that Disney breached their contract with her when they decided to stream Black Widow on Disney Plus Premier Access for $29.99, which suppressed movie theatre ticket sales for the film.

According to sources for The Wall Street Journal, which broke the news of Johansson’s suit, the actress lost around $50 million bonuses from Disney’s decision to stream the film on Disney Plus and not release it only in theaters. According to Variety, Black Widow earned $80 million in North America and $78 million overseas, as well a $60 million from Disney Plus, after its release on July 9, 2021. At the time of ScarJo’s lawsuit, Black Widow earned $319 million globally, which makes it one of Marvel’s lowest-grossing films of all time.

So…how much is Scarlett Johansson’s Black Widow salary and how different is it from the pay on her other Marvel movies? Read on to find out. 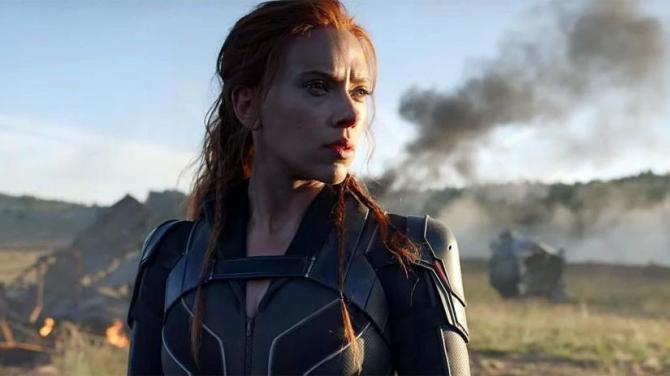 How much is Scarlett Johansson’s Black Widow salary?

So how much is Scarlett Johansson’s Black Widow salary? Well, in an interview with The Hollywood Reporter in 2019, Johansson confirmed that she was paid the same as her male-costars, Chris Evans and Chris Hemsworth, for Black Widow. So how much does she make? Well, according to THR, Evans and Hemsworth both made $15 million for their most recent solo Marvel movies: 2016’s Captain America: Civil War and 2017’s Thor Ragnarok. This means that Johansson made the same salary of $15 million for Black Widow.

Where she makes more than the Chrises, however, is with her executive producer credit, which makes her first Avenger to be an executive producer in a Marvel movie. As an executive producer, Johansson will earn pay on the back-end of Black Widow as well, which is likely why she sued Disney in July 2021 for allegedly suppressing box office sales by streaming Black Widow on Disney Plus. Still, regardless of what she earns in the back end, ScarJo’s producer credits means she makes more than the Chrises, who weren’t producers on their films, in the long run. ScarJo’s Black Widow salary also makes her the second highest-paid Marvel star after Robert Downey Jr., who made a reported $50 million for Avengers: Endgame.

How much did Scarlett Johansson make per Marvel movie?

Though ScarJo made $15 million for Black Widow (plus producer checks), her Marvel pay wasn’t always so high. According to IMDb, ScarJo made $400,000 for Iron Man 2, her first Marvel movie. Of course, that number went up over the years. For Avengers: Endgame and Avengers: Infinity War, Johansson was also paid the same as Evans and Hemsworth at $15 million per movie. Her net worth is $165 million, according to Celebrity Net Worth.

Black Widow is available to stream on Disney+ with Premiere Access.