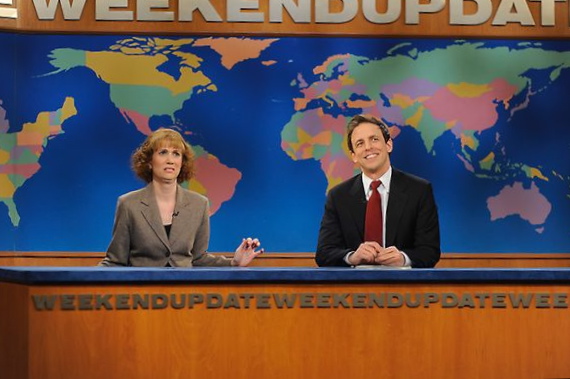 If you’ve got some time this weekend, we strongly suggest bookmarking this oh-so-entertaining New York Times article called “The God of SNL Will See You Now.” Essentially, the story caught up with 22 past and present “Saturday Night Live” cast members (and one who came close), all of whom spilled juicy details on what it really takes to audition for the 40-year-old show’s famously cryptic creator and executive producer Lorne Michaels.

The article comes at the right time since—as the Times pointed out—Michaels and his team have their work cut out for them this year, as they try to replace three huge talents who recently left (Bill Hader, Fred Armisen and Jason Sudeikis) and prepare for the departure of Seth Meyers early next year. Not to mention the loss of SNL MVP Kristen Wiig, who left last year.

In the article, cast members such as Chevy Chase, Dana Carvey, Kate McKinnon, Jimmy Fallon, Cheri Oteri, Molly Shannon, Tim Meadows, Will Ferrell and more open up about how they got the gig, how they didn’t get the gig the first time around, what characters they auditioned with, and more. A few highlights:

Ana Gasteyer: I did Martha Stewart. I was kind of obsessed with her. I knew that if I wore a blond wig I could look like her, and she had this patrician thing I’d grown up with.

Fred Armisen: [I did] Fericito, the Latin timbales-playing Tito Puente guy, was the majority of my audition. I did Sam Waterston from “Law & Order” and Vin Diesel.

Bill Hader: My audition was me as Vinny Vedecci, doing Al Pacino talking to his maid staff. Tony Blair talking about the new “Star Wars” movie in Parliament. James Mason with an expired gift certificate for a dozen doughnuts.

Rachel Dratch: I didn’t get it that year [of her first audition]. They hired Horatio [Sanz], Jimmy [Fallon] and Chris Parnell, and they said: “We’re not taking any women this year. But maybe next year.” I was at peace with it.

Kristen Wiig: They said the audition should be five minutes long, and do not go over five minutes. I ended up buying a stopwatch because I was so nervous. I would time it and it would say “5:02,” and I would be like, “I’m going to get this in five minutes exactly.” Then I heard that some people were out there for 11 minutes. I was like, “What?”

Molly Shannon: There was a woman scouting for the show, and she said: “Whatever you do, when you audition for Lorne, don’t do that character, Mary Katherine Gallagher. Lorne will hate that. You’ll never, ever get hired if you do that for your audition.”

Seth Myers: The hotel I was staying at, everybody was somebody who’d been flown in for the audition. If you went and got ice, you would hear snippets of auditions. Everybody else’s stuff sounds better than yours.

And that’s just the beginning! Head over to the New York Times to read the whole article now.