From her sleek all-black dress at the Golden Globes, to her pink-and-green flame and red puffy-sleeve dresses at the U.K. and Los Angeles Glass movie premieres, respectively, Sarah Paulson has been quite the force in the fashion world lately. It seems as though every single outfit the actress has stepped out in has been worth talking about—and her latest series of ensembles is no exception. Within the span of 48 hours, Sarah Paulson wore three different (truly iconic) trench coats—and she’s left me feeling like I maybe Marie Kondo-d my wardrobe a little too hard.

Look, I’m lucky if I switch out my coat for different one once a week. (It’s probably worth mentioning I only have two coats.) To wear three very different and very cute coats in just two days is what I dream about during winter’s coldest months—you know, the ones where fashion is hard, because summoning the energy to do anything but bundle up in pajamas and stay in bed all day is a challenge. Anyway, for Sarah Paulson, the shit I dream about’s an actual reality. She probably has an entire walk-in closet dedicated just to coats. It’s the kind of thing you know could never happen to you, but you still hold out hope that someday it will—a coat for every outfit.

My coat closet goals aside, Sarah Paulson really did out-do herself in the outerwear department Wednesday and Thursday. On Wednesday, Paulson visited the SiriusXM Studios in New York sporting a giant brown overcoat on top of jeans and a cream sweater. It was an ensemble that reminded me of The Velveteen Rabbit—soft, kind and warm. (OK, the coat might not be kind, but doesn’t it just seem like it would be?) 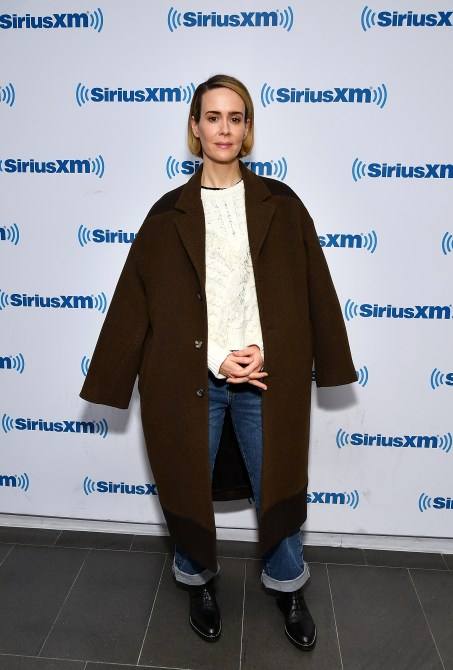 Then, on Thursday, Paulson spent her daylight hours walking around New York City in a floral leather trench coat right out of The Secret Garden. (I’m really using a lot of book references here, but if the coat fits…) Peeking out from the bottom of the long trench coat was an olive green dress, accentuated with crimson heels. The Michael Kors trench, much to our relief, is still available, so you can have your own Sarah Paulson moment, because you deserve it. 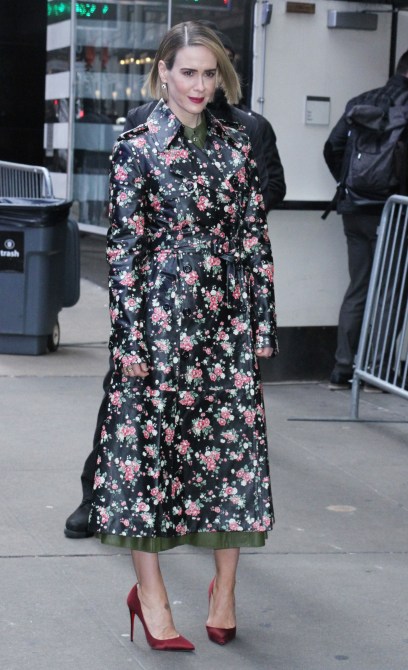 As soon as the sun went down, Sarah Paulson switched her look from day to night. The actress stepped out in a cream dress with a feather bottom, velvet heels and the crème de la crème of coats. Paulson’s ensemble was topped off with a huge red fur coat—which was so stunning I don’t think I’ll ever get over it. 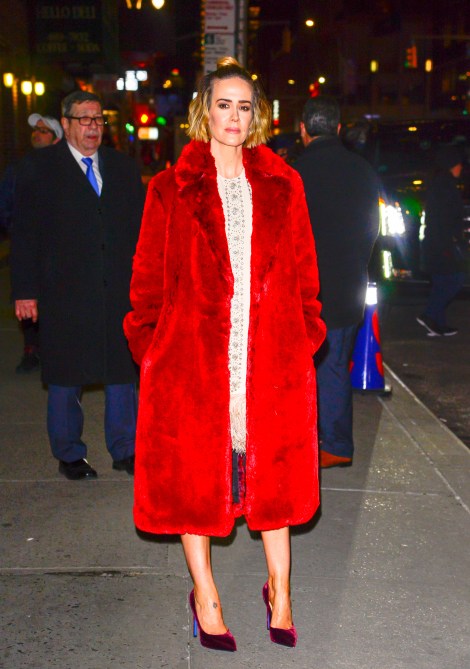 All three of Sarah Paulson’s looks were so iconic, I’m officially hanging up my coat—literally and figuratively. I’ve come to terms with the fact that the starlet’s outerwear game is not one that can be beat any time in the foreseeable future. Sarah Paulson 3, Me 0.