Sarah Paulson is officially the human embodiment of the fire emoji. At the Wednesday premiere of her new movie, Glass, the actress stunned in a truly unique evening gown. But not just any evening gown; Paulson wore—get this—a pink dress with green and yellow glittery flames on it. Yes, you read that correctly. We’re talking literal green flames, rising up from the hemline of her strapless bright pink gown. It might be the boldest look we’ve seen this year, and while we have no idea what compelled Paulson to wear it, we do know we love it. 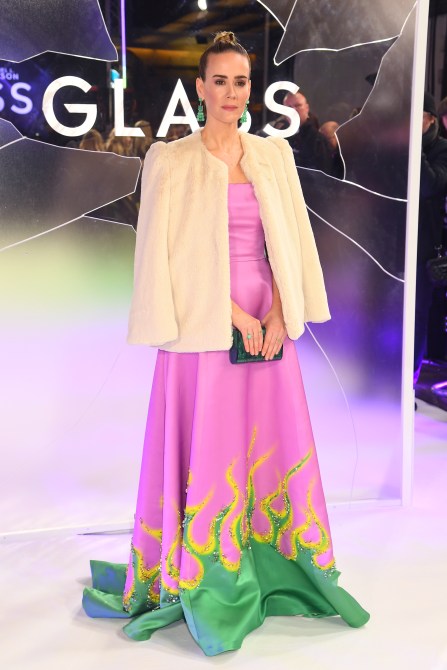 Adding fuel to the sartorial fire, Paulson topped off her shockingly hot Prada gown with a cozy Hiraeth faux fur jacket. (It is winter, after all.) She accentuated the fiery ensemble with beautiful jade green earrings by Irene Neurwirth and an Edie Parker clutch. (TBH, we’re really curious to know what Paulson carries in there.) The actress’ hair was pulled back into three little buns—a perfect way to further her whole avant-garde flame-dress vibe. Plus, the buns are held in place by tiny yellow hair ties that match the yellow of her dress. It’s all in those details, folks. 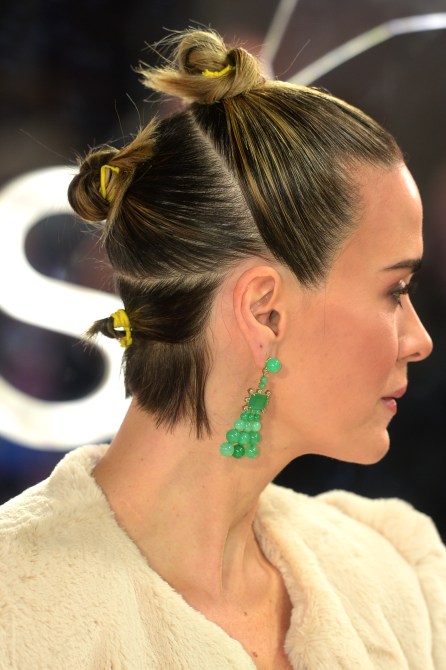 But wait—there’s more. Just when we thought Paulson had concocted the wildest movie premiere ensemble of 2019, she lifted up her dress to reveal neon green platform heels. Frankly, we’re not entirely sure Paulson wasn’t abducted by aliens and sent to an outer space fashion convention. The entire look screams Zenon: Girl of the 21st Century meets NASCAR meets The Little Mermaid—a truly bizarre combination, and one that perhaps only Paulson herself could pull off. 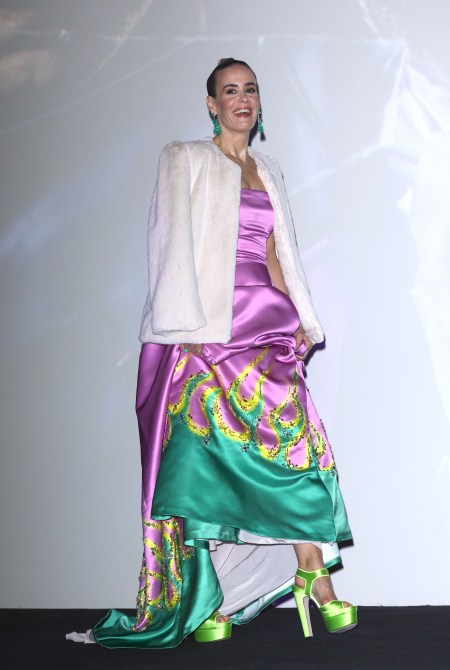 Paulson stars as Dr. Ellie Staple in M. Night Shyamalan’s new film Glass, which is described as a comic-book thriller. With a description like that, it’s no wonder the starlet showed up to the premiere dressed to the nines in comic-book-chic. Whatever the vision behind the ensemble, we’re behind Paulson all the way to Mars. Prepare the spaceships.