UPDATE: A rep for Sarah Jessica Parker has spoken to Daily Mail and unequivocally referred to the rumors as untrue. “It would be a fun thing for her, but she already has so much on her plate it’s not an option and she actually has never considered it before,” the source said. A representative of Vogue also said, “Anna and Sarah Jessica have been friends for a long time and the idea of Sarah Jessica taking Anna’s position at Vogue has never been discussed.” 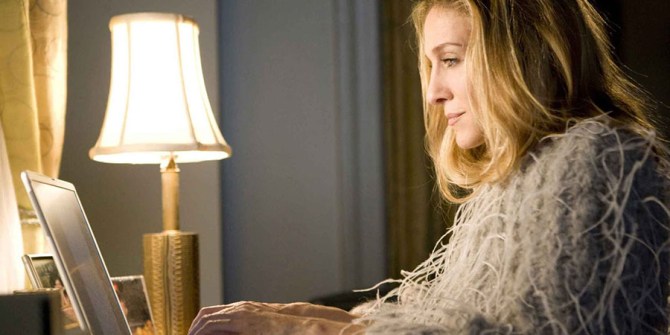 Out of all the things we’ve heard today, this proves to be the most interesting and debatable. There’s news that Sarah Jessica Parker—also known as fabulous writer and fashion enthusiast Carrie Bradshaw on “Sex and the City”—could be next in line for the fashion throne as editor-in-chief of Vogue when (if!) Anna Wintour retires.

According to RadarOnline, a publishing source revealed that “Anna is worrying colleagues who believe she has found her true successor in Sarah! It’s a surprising idea, but one that is not entirely a joke. Anna thinks Sarah, a fashion icon on [SATC], truly has what it takes to step into her shoes and take on a role at Vogue one day.”

The source went on to revealed that Wintour and Parker have been attending private lunches together, an activity that Wintour seems to favor.

The source also attempted humor by saying “after all, she already played a writer—and has the Manolo Blahniks!” Because these make someone qualified to be the EIC of Vogue, right?!

This rumor is kind of absurd for many reasons, chief among them: Parker is an actress by trade, and just because she played a writer on TV and bought lots of shoes doesn’t mean she’s capable of running a major magazine. Then again, maybe this is just what the wavering print industry needs: A-list stars taking over. It’d probably boost sales, at least for a few months until the novelty wore off.

Perhaps this is what Candace Bushnell, the original writer behind “Sex and the City,” had in mind for Carrie’s future, and SJP is actually living Carrie’s dream (even if it’s just in the form of a crazy rumor.)

Do you think that Sarah Jessica Parker would be a successful as Vogue EIC at Vogue? Weigh in below!