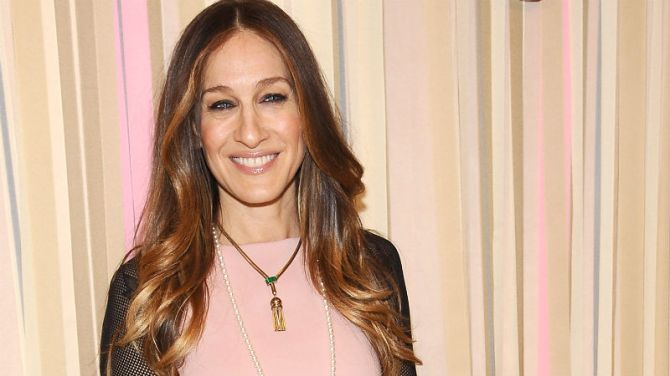 Sarah Jessica Parker at a preview for her new shoe line in New York.
Photo: Getty

Sarah Jessica Parker has worn a lot of hats since a little show called “Sex and the City” catapulted her to stardom more than 15 years ago. In addition to being an actress, she’s launched her own perfumes, a fashion line in collaboration with Steve & Barry’s, and even served as a creative executive for Halston for a time. Now, however, she’s dipping into the fashion item that also obsessed her best-known character, Carrie Bradshaw: shoes.

SJP Collection by Sarah Jessica Parker is a brand new shoe and handbag collection that will launch exclusively at Nordstrom this Friday, February 28. The shoes range in price from $195 to just under $500, and each one has a name and a story, from “Maud,” named for legendary designer Maud Frizon, to, of course, the “Carrie.”

MORE: 10 Trends Started by “Sex and the City”

Shoes come naturally to Parker, who seemed impressively well-versed in the collection—identifying each shoe by name, material, and colors like “geranium” and “aqua”—and was very much in the role of salesman, cooing over editors as they tried on various styles. Parker’s been playing with in the fashion sandbox for so long, it’s easy to forget that this is really her first collection that’s entirely her own.

So what is it about shoes that continues to capture women’s imagination? “I think it’s the accessory that just constantly changes the way you feel,” Parker told us. “You can wear the same dress every day with a different pair of shoes and its simply makes you feel different all the time.”

Many an actor has discussed the power that a pair of shoes can have in helping to bring a character to life—how they stand, how they carry themselves—and details like that aren’t lost on Parker. “I’m like that about everything. From the time I was a little girl, every detail of every costume—I split the atom, and I like it like that.”

One detail that Parker was particularly passionate about is the presence of little grosgrain ribbons throughout the collection—often along the seam on the back of a shoe, or as a tiny detail on a strap. The ribbons, as it happens, hold a very sentimental meaning for Parker, whose mother used to make her wear a ribbon in her hair every day.

“Though we didn’t really have two nickels to rub together, we had a bureau dedicated to hair ribbons, so … choices, choices. And they were all grosgrain, which was my mother’s favorite,” she told us.

In an early design meeting, Parker asked George Malkemus, her business partner, to see if they could explore adding a grosgrain ribbon to the backs of all of the shoes. “He was delighted by this idea,” said Parker, “and it also became clear to us that it could be our signature, and help identify us in a pretty saturated market of derrieres of shoes.”

Many of the shoes have a slightly retro or iconic quality to them—like songs you feel like you’ve heard before, but can’t quite place. A woven strappy sandal has a ’70s cocktail vibe, while a pointy-toe Mary Jane seems like something straight out of “Sex and the City.”

That said, Parker insists she didn’t have any one shoe in mind when she started designing. “Maybe an old pair of Charles Jourdan pumps,” she said. “You should be able to reach for this in your closet in four years and have no problem. You should be able to wear it, it should be relevant, it should hold up, and feel modern and timeless. That’s something we worked really hard on.”

The only thing Parker had qualms about, is it happens, was ankle straps. “I was terrified of ankle straps because I’m so short,” she confessed. “George and I worked really hard to drape everything super low, including really narrow straps so that it wouldn’t feel like it’s cutting you off.”

Being as detail-focused as she is—from ankle-strap silhouettes to color choices—she also named every single shoe in the collection herself. Of course, the hardest one to name was exactly the one you’d expect: “Carrie,” she smiled. “Because I knew people project a lot onto that.”

The SJP by Sarah Jessica Parker collection launches exclusively at select Nordstrom stores and online at Nordstrom.com on February 28!