In the years since their Sex And the City days, Sarah Jessica Parker and Kim Cattrall’s relationship has been on the rocks—and now, SJP has made it clear that she has no plans to work with Cattrall in the future.

During an interview with Variety, Parker, 56, was asked whether she would ever be OK with Cattrall rejoining the original SATC cast on HBO Max’s reboot, And Just Like That. Cattrall played fan-favorite Samantha Jones in the original series, which ran from 1998 to 2004, as well as in the show’s two spinoff films. But if it were strictly up to Parker, it sounds like there’s little potential for Cattrall to reprise her role in the future. “I don’t think I would [be OK with it], because I think there’s just too much public history of feelings on her part that she’s shared,” Parker shared. “I haven’t participated in or read articles, although people are inclined to let me know.”

Cattrall, for her part, refused to reprise her role as Samantha Jones in a third film adaptation of SATC, making it clear that she also had no interest in joining the cast of AJLT following her reported feud with Parker. Series showrunner Michael Patrick King also weighed in on her character’s absence in the reboot, noting that there are no plans to invite Cattrall back to the series “because she’s said what she has said.”

“We didn’t go to Kim for this, you know,” Parker added. “After we didn’t do the movie and the studio couldn’t meet what she wanted to do, we have to hear her and listen to her and what was important to her. It didn’t fit into what was important or needed for us.”

Parker went on to explain how AJLT continues to honor Cattrall’s character in the series without wiping her out completely. “There’s a very distinct line between Samantha and Kim. Samantha’s not gone. Samantha’s present, and I think was handled with such respect and elegance,” Parker continued. “She wasn’t villainized. She was a human being who had feelings about a relationship, so I think we found a way to address it which was necessary and important for people that loved her.” 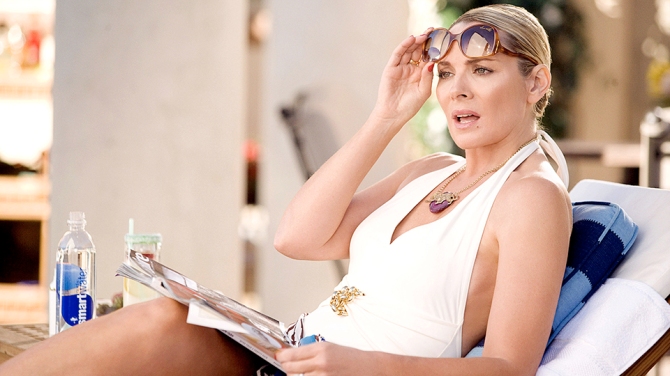 Back in 2017, Cattrall addressed her decision to exit the series, insisting that she would never play the role of Samantha Jones again. “Not for me. That was part of turning 60. That was a very clear moment of, how many years do I have left and what do I want to do with it? What haven’t I done? I feel that the show was the best when it was the series and the bonus was the two movies,” she told Piers Morgan during a TV interview at the time. “The answer was simply thank you, but no, I’m good. This isn’t about more money. It’s not about more scenes. It’s not about any of those things. This is about a clear decision, an empowered decision in my life to end one chapter and start another,” she said.

Cattrall also confirmed, however, that she and co-star Parker have “never been friends.” She explained, “We’ve been colleagues and, in some ways, it’s a very healthy place to be.” The How I Met Your Father star went on to note at the time that she felt Parker “could’ve been nicer” to her amid claims she quit Sex And the City over demands for more money. “This is really where I take to task the people from Sex and the City, and specifically Sarah Jessica Parker,” she said. I think she could’ve been nicer. I really think she could’ve been nicer. I don’t know what her issue is.”

The following year, Cattrall’s feud with Parker reached new heights when the SATC alum slammed the Hocus Pocus star for sharing her condolences on her Instagram page following the death of her brother, Chris cattrall. “I don’t need your love or support at this tragic time @sarahjessicaparker,” her response read. “My Mom asked me today ‘When will that @sarahjessicaparker, that hypocrite, leave you alone?’ Let me make this VERY clear. (If I haven’t already) You are not my family. You are not my friend. So I’m writing to tell you one last time to stop exploiting our tragedy in order to restore your ‘nice girl’ persona.”