Victoria’s Secret model Sara Sampaio is putting the rumors to bed: Her lips are 100-percent natural and totally hers. The 26-year-old model took to her Instagram story on Thursday to shut down the speculation and open up about the childhood insecurities she had with her naturally large lips.

In a Q&A with her fans, the Portugal-born beauty addressed long-standing rumors that her lips were a result of fillers or plastic surgery. “Are your lips natural??” one fan asked. “100% natural,” Sampaio replied.

However, the exchange didn’t end there. Though Sampaio’s pillowy pout has become one of her signature features as a model, she wasn’t always about it. In fact, the Victoria’s Secret angel “used to hate” her lips, as well as her green eyes, because of the brown eyes and thin lips that her friends and classmates had when she was growing up. Now, funny enough, they’ve become some of her favorite features.

“Funny story, when I was a kid I used to hate my lips, cause all my best friends in school had brown eyes and thin lips, and when your a kid all you want is to be like everyone else! Well now I really love them!” Sampaio wrote. 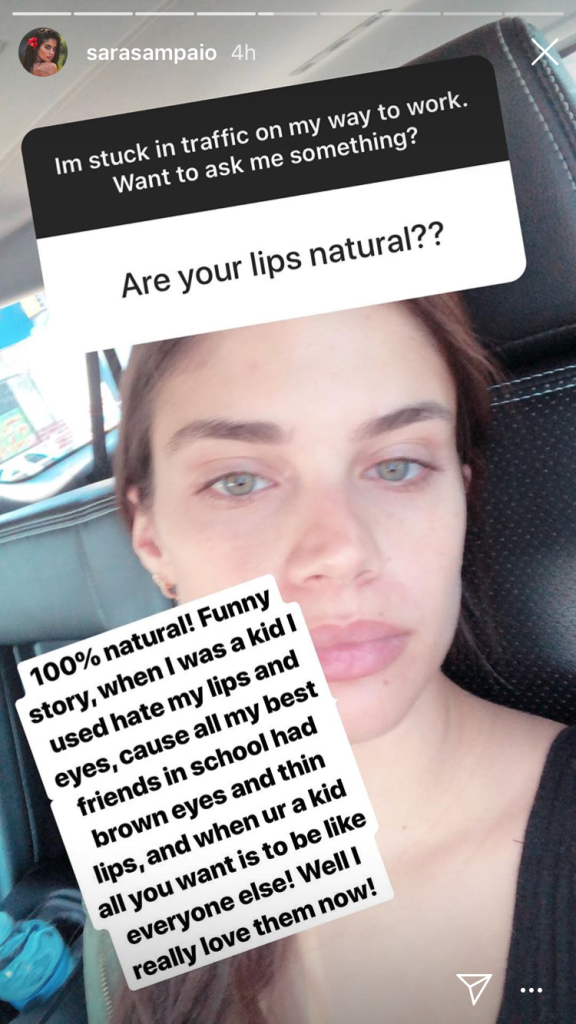 Sampaio isn’t the only celebrity who loves the body part that she used to have insecurities with. Cindy Crawford with her mole, Lea Michele with her nose and Kate Bosworth with her different-color eyes have all grown to embrace their uniqueness. We hope that Sampaio reminds her fans that the same is boring and individuality is where it’s at.