After he was eliminated on Night One, Bachelor Nation members want to know where Ryan from The Bachelorette 2021 is now and whether he’s responded to Michelle’s claim that he wasn’t “authentic” and had a “play-by-play book” on how to get a good edit on the show.

Ryan is one of 30 contestants on The Bachelorette season 18 with Michelle Young. Michelle, a 27-year-old teacher from Edina, Minnesota, was a contestant on The Bachelor season 25 with Matt James, where she was the runner-up. Michelle was confirmed as the season 18 Bachelorette during the season 25 “After the Final Rose” special, where guest host Emmanuel Acho announced Michelle and Katie Thurston, who was eliminated in 10th place on Matt’s Bachelor season, as the next Bachelorettes. Katie, who was the season 17 Bachelorette, aired her season from June to August 2021. Michelle’s season will air from October to December 2021.

Who is Ryan from The Bachelorette 2021? 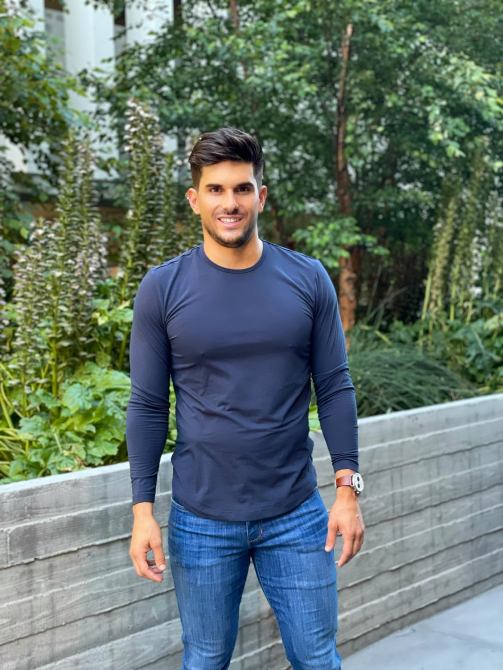 So…who is Ryan Fox from The Bachelorette 2021? Ryan is a 30-year-old from San Jose, California. His Instagram handle is @ryanmichaelfox. “Attitude is equally as important as ability,” his Instagram bio reads.

Ryan was eliminated on Night One after co-hosts Kaitlyn Bristowe and Tayshia Adams found a folder of “notes” in his hotel room about how to make Michelle like him and not be edited as a villain on the show. The folder also included quotes used by past Bachelors, as well as notes on likable Bachelorette alums like Jason Tartick and Mike Johnson. When Kaitlyn and Tayshia told Michelle about the folder, Michelle confronted Ryan about his notes. Ryan claimed that, while he wrote some of the notes, most of them were written by his friend’s wife. He also claimed that he had only seen a couple hours of The Bachelor, which is why he had notes, so he could prepare himself for the show.

Michelle then asked Ryan to take her to his hotel room, so she could see the notes for herself. After she read over the notes, which also included details on her career as a teacher and how he can seem more interested in her profession, Michelle decided to send Ryan home and he became the first contestant eliminated on her Bachelorette season. Michelle later told the cast that she eliminated Ryan because he wasn’t “authentic” and had a “play-by-play book” on how to be the next Bachelor.

Before Michelle’s Bachelorette premiered, Ryan took to his Instagram Story with a Boomerang a bottle and a glass of wine with the caption, “If this is happening. At least I’m going to enjoy myself,” with three laughing face emojis. Ryan also responded to Michelle’s claim he wasn’t “authentic” by reposting his friend’s Instagram story, who called him “the most honest and genuine guy I know.” Since The Bachelorette season 18 premiere, Ryan has also limited comments on his Instagram. He also has no mention of The Bachelorette in his Instagram bio.

Though he claimed not to know much about the Bachelor franchise, Ryan was a “Bachelor” during a stop on Becca Kufrin and Ben Higgins’ “Bachelor Live on Stage Tour” in February 2020. The event saw meet 10 women with the hopes of finding a romantic connection. “Well this happened last night… 🌹 ⁣ ⁣ Thank you to the 10 beautiful ladies who put themselves out there on stage last night. You all did amazing!!! I honestly didn’t know how you did it? Lol Especially on short notice and not knowing what to expect 😬,” he captioned an Instagram post. “Bachelorlive staff, hosts, and dancers thank you for coaching me and calming my nerves before the show and throughout. I was a wreck and needed it 😰. ⁣ ⁣ And lastly thank you to all my friends and family who came out last night. There was roughly 70+ people who paid to watch me suffer on stage 😂. Looks like I might have more friends then I thought 🤷🏻‍♂️.”

In his Bachelorette bio, Ryan described himself as “compassionate, competitive and motivated.” “Ryan is compassionate, competitive and motivated. He dreams about bringing the perfect woman home to his family raisin ranch to enjoy the picturesque sunset of central California, and he is hopeful that Michelle is the one for him. Ryan is a planner who creates lists for all endeavors he pursues, and that includes his love life,” his bio reads. “He is looking for a woman who checks off all his boxes: intelligent, down to earth, big heart, healthy and a girl-next-door type. Michelle may check all of his boxes, but will he check all of hers? Only time will tell …”

– Ryan is enthusiastic about cuddling.

What is Ryan’s job?

What is Ryan’s job? Ryan lists his job on The Bachelorette as “environmental consultant.” Ryan runs his own environmental consulting company, Fox Onsite Solutions. He opened up about his business in an Instagram post in October 2021. “Fox Onsite Solutions 🌱 my side project turned full Environmental consulting company is on the home stretch for 2021 👨🏻‍🔬👨🏻‍💻. ⁣ ⁣ With construction at an all time high we hit our target goal midyear 🎯🏆 and are on pace to double our goal,” he wrote in the caption. “While we continue to work through projects, the last part of this year will primarily focus on closing out existing projects ✔️and business development 📈: new training plans, filing systems, timekeeping structures, new technology etc. ⁣ ⁣ Looking forward to some well deserved R&R 😴😴, some nice vacations 🏝, and spending some time with family 👨‍👩‍👧‍👦. Going to enjoy focusing more attention on my other pet projects that I have been wanting to start. My body and mind definitely need a break 😵😵‍💫.”

Ryan showed one of his projects in an Instagram post in October 2021, where he assembled a house by himself. “Never ending projects is my favorite way to keep busy. #farmboy #worksmarternotharder #oopsduginthewrongspot 🤷🏻‍♂️,” he wrote in the caption.

Does Ryan win The Bachelorette 2021?

Does Ryan win The Bachelorette 2021? The answer is no. As we explained earlier, he was eliminated on Night One and does not come back.

According to Reality Steve, Nayte Olukoya, a 27-year-old sales executive from Austin, Texas, was the winner of Michelle’s Bachelorette season. Nayte proposed to Michelle during the Final Rose Ceremony in Punta de Mita, Mexico, where Michelle filmed her Fantasy Suites. Michelle accepted Nayte’s proposal and gave him her Final Rose. Brandon Jones, a 26-year-old traveling nurse recruiter from Portland, Oregon, was her runner-up. (For more spoilers about Michelle’s Bachelorette season and her winner, click here.)