Whether you’re a Denver Broncos fan delighted with your new quarterback or a Seattle Seahawks devotee feeling a little betrayed by your former king, there’s no denying Russell Wilson’s unparalleled instinct and athleticism on the football field. The quarterback has amassed a staggering amount of wealth since he was drafted by the Seahawks in 2012, and as he enters his 10th year in the National Football League, Russell Wilson’s net worth has quickly made him one of the world’s highest-paid athletes in the world and the third highest-paid player in the NFL.

How much did Russell Wilson make in his first year?

When the Seahawks drafted Wilson in April 2012, the then-University of Wisconsin QB had been the most accomplished in college football despite his height. Standing at 5’ 11”, this was often talked about as being a disadvantage as the average quarterback height is 6’ 3”. Wilson was the 75th pick overall and sixth selected quarterback behind Andrew Luck, Robert Griffin III, Ryan Tannehill, Brandon Weeden and Brock Osweiler, and only Tannehill out of those five remains active in the league as of the 2022 season. As a rookie, Wilson was named the Seahawk’s starting quarterback and was signed a $750,000 contract. That might sound like a lot, but for a quarterback, that’s relatively cheap given how much he’d go on to make when he resigned.

RELATED: Here’s How to Watch NFL Games For Free, So You Won’t Miss a Second of Football

How much did Russell Wilson get paid at the Seahawks?

Wilson succeeded expectations in this first year of NFL football. He was named Pepsi NFL Rookie of the Year, PFF Offensive Rookie of the Year, and ranked #51 on the NFL Top 100 of 2013. He led the Seahawks to an 11-5 record, a spot in the divisional round playoffs and put up some great personal statistics. He resigned with the team for a significantly higher sum than his rookie year, raking in an $88 million contract over four years. That contract came with a signing bonus of $31 million and $60 million guaranteed money. That investment well and truly paid off for the team. Wilson got his team to victory against the Denver Broncos at Super Bowl in 2014 but was narrowly defeated in the following Super Bowl against the New England Patriots in a nail-biting finale to the 2015 NFL season. 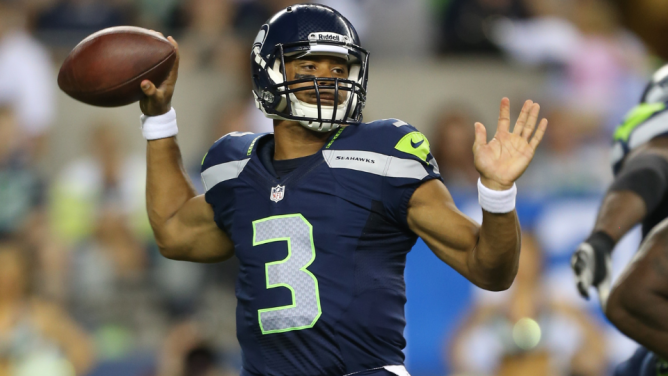 In 2019, Wilson resigned again with the Seahawks for $140 million, in addition to endorsement deals he was getting left, right and center from the likes of Nike, Mercedes-Benz, Bose and more. This mammoth deal made him the highest paid player (annually) in the NFL at the time, but he wanted to share his wealth among his teammates and so gifted his 13 offensive linemen $156,000 worth of Amazon stock–$12,000 each. “Every Sunday we go to battle together. You sacrifice your physical and mental well-being to protect me, which in turn allows me to provide care for my family,” Wilson wrote in a letter to his linemen at the time, according to TMZ. “Now it is my turn to return the favor.”

How much did the Denver Broncos pay for Russell Wilson?

Because of his success leading the team, Wilson was widely regarded as Seahawks royalty. So, it came as a shock to many when he was traded to the Denver Broncos in March 2022. The two years remaining on his Seattle contract were carried over to Denver, at $24 million and $27 million for 2022 and 2023 respectively. On September 1, 2022, it was announced he and the Broncos had agreed to a five-year contract extension worth $245 million total. “For me, this has been an amazing journey. I remember being up on the stage not too long ago and talking about the visions and the goals and the missions, and I think the best part of it all is when you’re around some amazing people, amazing teammates who are so dedicated to the craft, it makes this that much more enjoyable,” Wilson said in a news conference at the time. “I believe this is a marriage, and you want to be here for a long time, and my goal is to be able to finish my career here.”

Per Celebrity Net Worth, Russell Wilson’s net worth as of 2022 is $165 million, with an annual salary of $35 million. This makes him one of the highest-paid athletes in the world, with number one being the Paris Saint-Germaine F.C.’s Lionel Messi in the French football league. He’s come a long way since his days with the Wisconsin Badgers and it sounds like there are many more fruitful years ahead.