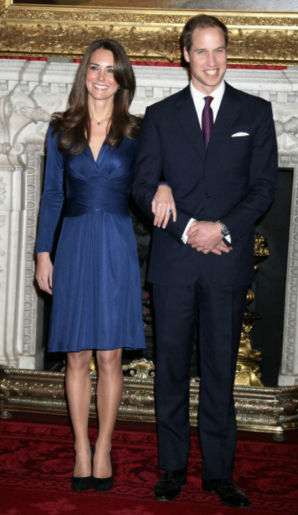 UPDATE: It’s a boy, officially born on Monday, and his name is officially George Alexander Louis according to Clarence House!

PREVIOUSLY: Next to whether it’ll be a boy or a girl, the biggest question surrounding the royal baby is undoubtedly what Kate Middleton and Prince William will name the little guy or gal.

Obviously, there’s already been a steady stream of international speculation as to what the future King or Queen of England’s name will be, with a number of surveys, polls, bets, and educated guesses taking place. Some are fairly reasonable (Alexandra, Diana, George), while others are, um, a bit more out there. Below, we’ve rounded up differernt reports all seeking to answer one question: What will the royal baby be named?

Hyacinthe or Theophilus
This month, U.K. publication the Mirror repoirted that Kate and Wills could call the child Hyacinthe or Theophilus after one of their exotically named ancestors. Researchers at family history website Ancestry.co.uk found those two mouthfuls are actually the most popular names in the family tree of both William and Kate.

Diana
Plenty of publications (and plenty of Americans) have been speculating that the couple might choose to name the baby, if it’s a girl, after William’s late mother and beloved British princess. In fact, the name has been landing high on polls, with both the British and American public thinking it’s a viable choice.

Even Dame Helen Mirren weighed in on the topic, when asked what she thought about the name Diana for a girl.  “I wonder if they’ll go there. That would be interesting, wouldn’t it? That would be very interesting,” she told British media, adding that “Her [middle name will be Elizabeth without a doubt.” Mirren also said Caroline “would work” after Kate’s mother Carole, while she also admitting liking Charlotte and Victoria.

“It would be nice to have one of those ancient Anglo-Saxon names,” she added.

We’re thinking the couple may use Diana as a middle name if it’s a girl, not as a first name. That way, baby can grow up with its own identity.

Alexandra or James
Bookies are making a killing as the British public are actually placing bets on the name of the child. According to ABC News, betting agency Ladbrokes took 50,000 bets in the hours after the Duchess of Cambridge went into labor Monday morning. Company spokesman Alex Donohue said the public has rushed to put small amounts of money —such as a pound— on the soon-to-be-born infant’s name because they “want to be involved.”

“Never underestimate the British public’s obsession with the royal family,” he said.  So far, the money is on Alexandra for a girl and James or George for a boy—two names that already have leading the pack for months.

Wild card names
Other potential names that have been making the rounds include Grace, Alexander, James, Henry, Arthur and Albert.