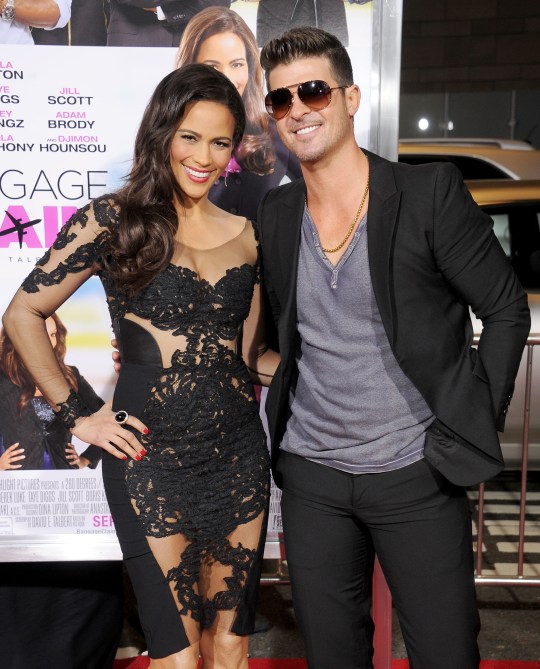 There’s no doubt that former “Growing Pains”‘ patriarch Alan Thicke is a proud papa, but he might also be slightly delusional. The father of Robin Thicke recently told Us Weekly, “I told [Robin], ‘You’re a power couple now. If you only adopt a few Ethiopian kids, you’d be the next Brangelina.'”

We love Robin and his wife Paula Patton and true, they are one sexy couple like Brad Pitt and Angelina Jolie, but Brangelina they are not. Here are five reasons why we think they’ll never be on par with the A-list couple:

1. Robin is kind of a sleaze.
Yes, Brad did cheat on America’s sweetheart Jennifer Aniston, but he also did so with a great amount of discretion. The first public sighting of Brad with Angie as a “couple” was in 2005 on the beach with her son Maddox, and they didn’t touch once. Robin, on the other hand, was recently caught posing with a fan with his hand clearly grabbing her butt. Plus, there was that whole grinding on a 20-year-old Miley Cyrus thing.

2. Paula is no Angie when it comes to acting.
This isn’t a dig at Paula, who has given great performances in movies like “Precious” and “Disconnect” (we’ll let “Jumping the Broom” slide), but Angelina is an Academy Award winner.

MORE:  Angelina Jolie Will Receive An Honorary Oscar This Year

3. They’ve only got the one kid.
Robin and Paula’s son Julian is adorable, but that’s just one cute kid compared to Brangelina’s brood of six. If they really want the title of the next Brangelina, they have some work to do.

4. They aren’t known for their charity.
When you think of Brangelina, there are three things you think of: Jen (hey, we’re just being honest), lots of kids, and their charity work. Over the years the couple has donated an insane amount of money to various charities. Plus, there was Angelina’s work as a former Goodwill Ambassador for the United Nations High Commissioner for Refugees. If Robin and Paula really want the honor, they’ve got to hand over the dough.

5. They’re not that A-list just yet.
Robin is definitely having a moment career-wise, but will it last? He’s been in the music business a long time, but it’s only recently that’s he become a household name, thanks to the undisputed 2013 song of summer “Blurred Lines.” Paula is also moving her way up in the acting world with a leading role in the romantic comedy Baggage Claim (note: Angie hasn’t done a rom-com since the abysmal “Life or Something Like It” in 2002), so we’ll have to wait and see where her career takes her. For now, they just don’t have the major status that Brangelina has.

In the meantime, we really need to think of a cute couple name for them. Any thoughts?