Since his secret wedding in 2020, fans have wanted to know more about Riz Ahmed’s wife, Fatima Farheen Mirza. Ahmed, who is known for movies like Venom and Sound of Metal, confirmed in an interview on the “Grounded with Louis Theroux” podcast in January 2021 that he and Mirza had married in a secret in 2020.

In the interview, Ahmed, who is from the United Kingdom, revealed that he had been staying with his “wife’s family” in California. When the podcast host asked him how long he’s been married, Ahmed responded, “Not very long, actually.” He continued, “I think this is the first time I’ve ever mentioned it in an interview, so congratulations on this incredibly exciting scoop. I mean, I guess I don’t really feel it’s generally that relevant, so I don’t delve into my personal life or my dating history or even family life much.”

Ahmed went on to confirm he’s now a married man on The Tonight Show Starring Jimmy Fallon later that month. “It’s a weird one, isn’t it? I guess because we live in a social media age if you don’t, like, get on the megaphone about stuff it’s like, it’s a secret, but I never know how much is oversharing,” he said. “Like, I’m into matcha lattes, but that’s just never come up. I’m not a secret matcha latte drinker.”

He revealed that he and Mirza kept their wedding small due to the current health crisis. “Obviously, kept it super intimate, and socially distanced. There was just like, hardly anyone there really,” he said. “We did it in a backyard, which is nice in lots of ways. And I think the nicest thing about it was you didn’t have 500 aunties hanging around you, pinching your cheeks.”

So who is Riz Ahmed’s wife, Fatima Farheen Mirza? Read on for what we know about their relationship and how they met.

How did Riz Ahmed and Fatima Farheen Mirza meet?

So how did Riz Ahmed meet his wife, Fatima Farheen Mirza? Well, in an interview on The Tonight Show Starring Jimmy Fallon in January 2021, Ahmed revealed that he met Mirza “randomly” while he was in New York City preparing for his role in the 2021 movie, Sound of Metal, which he was nominated for at that year’s Golden Globes.

“We just both sat down at the same table in a cafe, where we both turned up to write,” he said. “We were both jostling over the same laptop plug points, like a very modern way of meeting.”

After that, the two “struck up a friendship” and later “reconnected down the line.” “But it’s weirdly one of the many things about preparing for this role that was so special. It just brought a lot of goodness into my life,” Ahmed said. 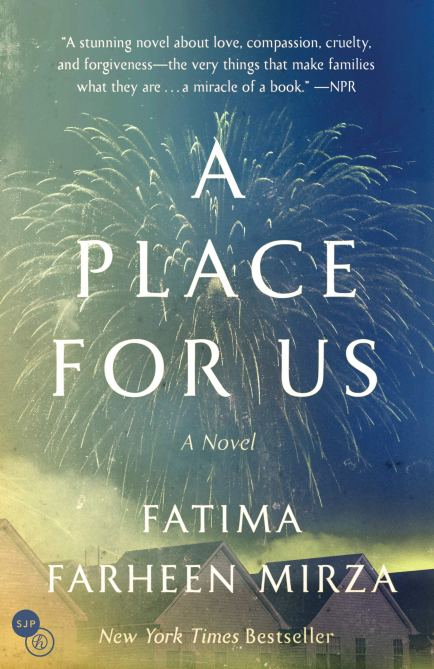 What is Fatima Farheen Mirza’s job?

Ahmed described Mirza in his interview on The Tonight Show Starring Jimmy Fallon as an “amazing novelist.” Fans may recognize Mirza as the author of the New York Times best selling book A Place For Us, which was also a 2019 National Book Award nominee and received praise from celebrities such as Christiane Amanpour. Mirza, who is a graduate of Iowa Writers’ Workshop and a recipient of the Michener-Copernicus Fellowship, is also friends with celebrities such as Sarah Jessica Parker, who runs the imprint that A Place For Us was published under, SJP For Hogarth. Parker was also photographed at several book signings for A Place For Us in 2019.

“I’m so happy that the book found Sarah Jessica’s hands,” Mirza told Electric Literature in 2019. “She’s one of the most remarkable people I’ve ever met, one of the most genuine, and I’ve learned so much from her. It has been inspiring to see the way she’s gone above and beyond with her role as an Editorial Director.”

She continued, “Every time we’ve spoken about the novel I’ve had the thought that she is the ideal reader a writer might want for their book because she reads with her whole heart — she’s thoughtful, insightful, and so precise in her observations. It’s clear that she cares about the characters as though they were real people and that she reads books as though she’s lived in them. And I’ve felt so lucky this past year to have her support and guidance, whether we’re celebrating something exciting about the book, or she’s offering advice on how to approach an interview, or talking through what it is like to create something and share it with the world, how it can be both frightening and rewarding. She’s really been there for me, and her presence, her kindness — it has made publishing this novel a truly meaningful and unforgettable experience.”