We’ve been here before. A TV show kills off a fan favorite, only to later reveal they’ve been alive the whole time!! Spooky. The perfect twist for Halloween. Well, this Riverdale Season 4 Jughead death theory is something else. Just wondering. Because we can’t imagine the CW letting Cole Sprouse out of his contract so soon. We also can’t imagine the show without the broody, beloved Jughead. But…spoilers ahead!

Riverdale showed us a flash-forward in their spooky Halloween episode that showed a coroner showing Betty Cooper and FP Jones Jughead’s body. Jughead was trapped in a coffin by some of his Stonewall piers during the present-day, and it looks like it really didn’t turn out so well for him. Eek! It definitely looks like they’re planning to kill off Jughead. And Lili Reinhart and Skeet Ulrich did some truly fabulous acting when they saw their boyfriend and son, respectively, lying dead and cold on the table.

All that said, this show has been anything but consistent. After two seasons, they introduced magic and gargoyles into the world of Riverdale. Cheryl was sent to a correctional facility/monastery for gay conversion therapy. She burned her house down. Betty saw two babies float over a fire. The Lodges got Archie sent to prison. Chic was the gargoyle king. A lot of people have pretended to be other people. So like, literally anything is possible. 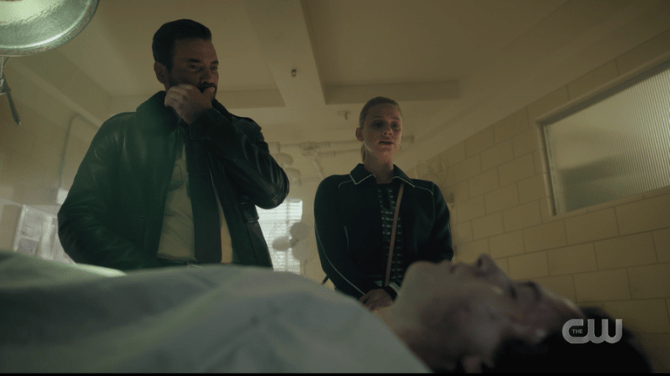 We were already given a warning that Jughead could be dead. At the end of last season, there was a flashforward that suggested Jughead was no longer alive. Veronica, Betty and Archie are standing over a bonfire (y is there always fire tho?). The best friends are half-dressed and drenched in blood. Archie stands somberly over the fire, holding Jughead’s beanie as Betty tells the whole group to burn the rest of their clothes. And Jughead? Well, he’s not in the shot. In fact, he’s nowhere in sight. But also—just a reminder that just before that scene pictured above, Jughead confided in Betty. He told her on a phone call that he’s confident if he ever actually went missing, she’d be able to find him. She’d be the one. So mayybee that was a clue. He’s possibly not really dead, and believes that Betty will be the one to find him. Well, get looking, Betty! Cause we’re wondering if that is a fake corpse. Dun dun dunnn.