Yooo! We weren’t expecting this. This Riverdale revelation about Polly and The Farm makes so much sense. We have no clue why we didn’t put the puzzle together until now. Riverdale is about to debut its fourth season in Oct. However; there is still a major loose end just daggling in the background. The cult organization–The Farm.

We were all shook when Chad Michael Murray appeared on the CW series as Edgar Evernever—the leader of The Farm in Season 3 of Riverdale. However, whispers and rumblings of the cult began way before this past season. In fact–it links back to Season 1. If you recall, in the first season of the series, Polly (Tiera Skovbye) said that she and Jason Blossom were planning to run away from Riverdale. She mentioned that they planned to start a new life on a farm.

This means well before we were introduced to this world and before Jason’s death–he and Polly plotted to run away and raise thier babies at The Farm. Things didn’t exactly go according to plan. Jason passed away, and Polly went to stay at Sisters of Quiet Mercy for a bit. In Season 2–Polly along with her twins, Juniper and Dagwood, finally get to The Farm.

In Season 3 of Riverdale, we watched Polly lure her mother into the cult, and she became one of The Farm’s most devoted followers. But how did she find out about the cult in the first place? A new edition of the Riverdale tie-in comic books just spilled all of the tea.

Apparently, Polly ran into Evelyn Evernever way back before the events of the TV show. Riverdale fans just dropped a couple of panels from the new issue on Reddit. 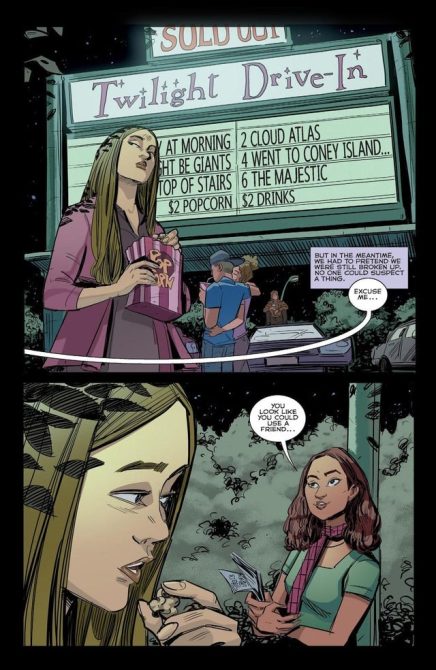 In the comics, we can see Polly running into Everlyn at a drive-in when she was still dating Jason. During their encounter–Evelyn asks Polly if she needs a friend before handing her a flyer for The Farm. This means that Evelyn has been plotting and planning to recruit for The Farm for literal years. Since Polly was desperate to find a way to keep her creepy love affair with Jason under wraps we can see whey she was obsessed with The Farm.

So what does this mean for The Farm and Polly in Season 4 of Riverdale?

In the Season 3 finale, Betty (Lili Reinhart) discovers that The Farm is just a front for Edgar Evernever organ-harvesting operation. However, before she does anything about it, The Farm and all of its followers including Polly vanish. Clearly, Season 4 of Riverdale is going to be super intense.

Riverdale Season 4 will premiere on the CW on Oct. 9.