I’m about to embark on what I hope will be a compelling case for why season 1 of “Ringer” is the perfect show to binge-watch on Netflix. I’ve long been evangelizing the now-canceled CW show—which aired for one season last fall—because its really, really addictive. 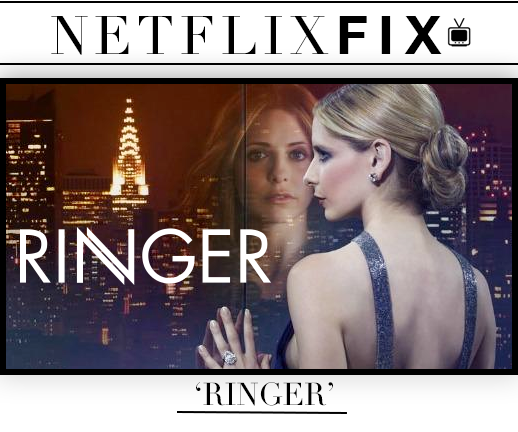 Let me be clear: I don’t speak fluent CW (oh, except for the absurd “90210” reboot which I’ll cop to having seen every episode, and creating this when it went off the air.).

My TV tastes skew toward super-serialized cable dramas (“Mad Men,” “Damages,” “The Killing,” “Homeland,” “Sons of Anarchy,”) though I know my way around a reality show or two. I’m not a huge of fan of network dramas (I watched “Scandal” and—gasp!—didn’t love it), some of which I find to be a bit safe. I started watching “Ringer” because I really like Sarah Michelle Gellar, and the commercials made it look pretty compelling.

The gist: SMG plays estranged twins—Bridget, a down-on-her-luck former addict and stripper being chased by a killer who thinks she witnessed a murder, and Siobhan (props for choosing a cool and unusual name!), a cold-as-ice devious New York society wife (think a grown-up version of Gellar’s Catherine from “Cruel Intentions.”) The two reunite briefly, Siobhan disappears, and Bridget assumes her identity. And that’s just in the first few minutes!

I’m not saying the show’s a masterpiece of a high-art but for what it is, it’s perfect. It’s also much more adult than every other show on the CW—there’s only one teenager in it, and marriage plays a prominent role—which is probably a big reason for its demise. Rumor has it a few major networks turned it down, but it probably would have a longer lifespan on CBS or ABC. When it got canceled, I threw a legit fit, and may or may not have signed an online petition to bring it back.

Convinced  yet? If not, here are 5 reasons why you should binge-watch “Ringer” immediately.

It ended up on the teen-friendly station but there’s nothing teenage about it. We learn right off the bat that Bridget is a recovering hard-drug addict and former stripper who’s life is still kind of a mess. A few other plot points that are definitely not “CW”: Native American hitmen, someone being forced to inject heroin against their will, faked pregnancies, extramarital affairs, interracial sex, witness protection, and murder. Given the themes, I kind of understand why CW viewers didn’t really take to it, but you totally will!

2. It’s loosely based on the Bette Davis film “Dead Ringer.”

The dark, campy 1964 film is also about estranged twin sisters—one rich, one struggling—and one assuming the others’ identity. In subtle ways, “Ringer” also pays homage to other classic noirs and mysteries, such as “The Lady From Shanghai” and “North by Northwest.”

If you thought “Gossip Girl” was slick, you’ll be shocked at the high production values “Ringer” employs. It mostly takes place on ritzy Park Avenue—which is often shot aerially as a dizzying cityscape of stone gargoyles and moving yellow cabs—in an apartment most of us can only dream about. Interestingly, it’s also partially set in Wyoming (you’ll learn why), which is pointedly the opposite, with a few scenes also set in Paris, which is shown as a flurry of posh bars and hotel rooms.

4. Even the Times approved it.

From the illustrious New York Times, and I quote: “The pilot has a throwback, B-movie vibe that’s entertaining,” plus “[Sarah Michelle Gellar] brings the same matter-of-fact soulfulness to the mystery story of ‘Ringer’ that she did to the Gothic romance of ‘Buffy.’” Also: “‘Ringer’ isn’t quite like anything else on CW—it’s closer to [then-new] nighttime soap ‘Revenge’ on ABC—and its glimmers of humor and the quirky ways it works the specter of Bridget’s addiction into the plot make it worth keeping an eye on.” Convinced yet, TV snobs?

I realize this isn’t always a plus—lots of folks are more obsessed with neatly-wrap-it-up-in-an-hour shows—but for fans of twisty plotlines and cliffhangers, this is for you. Basically, if you miss even one of the 22-episode season, you’re screwed. Good thing you can binge-watch every one this weekend! Watch a preview of the Pilot below!