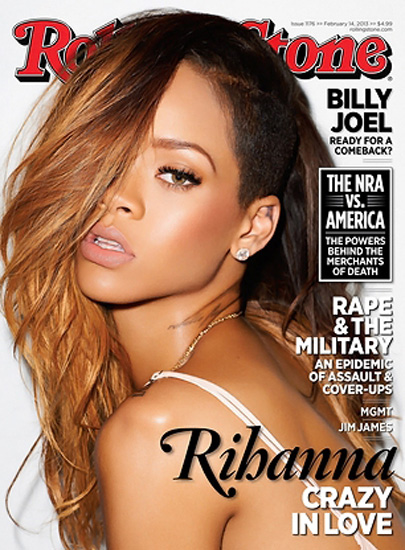 Earlier this month, both fashion photographer Terry Richardson and Rihanna used social media to cryptically alert the world to the fact that they might be working together in some capacity. Richardson posted a pic of himself posing with Rihanna on Instagram, while RiRi tweeted about shooting some sort of cover. While we could only speculate about what these two were cooking up, we knew it would be a match made in slightly-overexposed (film-wise and clothes-wise) heaven.

Turns out, the pair were working together on the new issue of Rolling Stone, which Rihanna covers and Richardson shot. The image is unlike anything we’ve seen from Rihanna lately—the blend of edgy-sexy we’ve grown so used to has clearly been replaced by a more stereotypical men’s magazine brand of sexiness—pouty lips, bombshell hair, airbrushed-to-perfection bronzed skin, and mega-lashes.

The sensual pic isn’t terribly surprising—sex is Richardson’s calling card, after all—but we’re surprised Rihanna would agree to it, since she seems to go out of her way to appear sexy in a very left-of-center way. In fact, the shot is more reminiscent of RiRi’s early “Pon de Replay” days, when the Barbadian was considered just another early-Aughts Beyoncé wannabe.

At any rate, the article should be interesting. According to a preview on Rolling Stone’s website, contributing editor Josh Eels follows the mega-star around Los Angeles and checks out her new Pacific Palisades mansion, where Rihanna opens up about her image, her tour, and—naturally—the smear on her otherwise flawless trajectory, aka Chris Brown.

“We value each other. We know exactly what we have now, and we don’t want to lose that,” she says in the issue, which goes on sale Friday. We’re betting it’ll be a must-read.