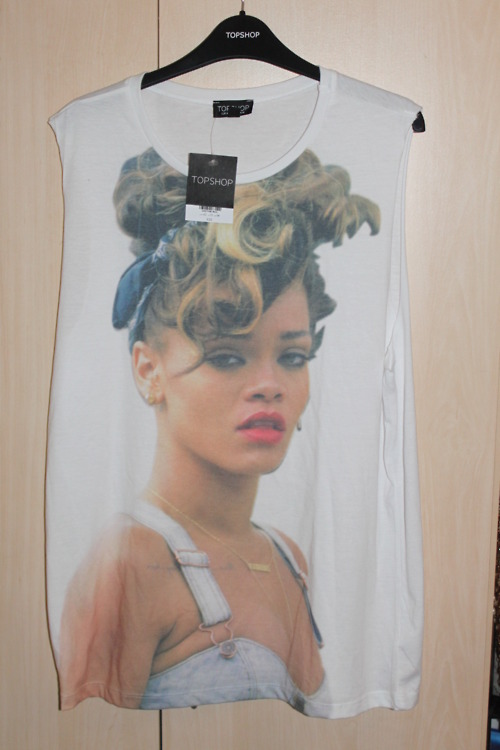 Don’t expect Rihanna to be shopping at Topshop for T-shirts anytime soon. The superstar is suing the British mass retailer to the tune of $5 million in damages over a graphic T-shirt that features her image—and wasn’t approved by anyone on her team, reported Page Six. To make matters worse, the 25-year-old isn’t receiving any royalties from the product, which is sold in the store’s UK outposts.

According to the New York Post’s gossip page, RiRi’s team have desperately been trying to negotiate with Topshop for almost a year on the matter, but the fast fashion chain isn’t budging. Apparently, they’ve been dismissive throughout, offering up a paltry $5,000, and essentially telling her to go away.

So how can Topshop get away with is? It seems the retailer’s defense is a creative copyright loophole that exists in the UK. “Rihanna’s management asked Topshop a number of times to stop selling her image and were told, ‘We do what we want.’ They buy the pictures from a photographer, but they do not pay the artist licensing fees. Unfortunately, UK law does not protect the artist,” a source told Page Six.

Given Rihanna’s staggering success, she obviously doesn’t need the money, but clearly is taking issue seems with the attitude of Topshop’s management. “What is most offensive for Rihanna is that they basically told her, ‘Go to hell. We don’t care; we are going to continue selling you.’ Topshop is now in the United States. They set up in Manhattan and Nordstrom, but they know better than to do this in the US because they would get in trouble,” the source continued.

Also of note is that Rihanna’s second collection for British high street brand River Island, a competitor of Topshop, will feature images of the pop star and her friends. A Topshop source has confirmed that the shirt in question is indeed the subject of litigation, so hopefully this doesn’t get too ugly.