The New England Patriots took home their sixth win at last night’s Super Bowl game against the Los Angeles Rams. While many tuned in to watch the game, others tuned in to see the halftime show. Whatever way you chose to consume the 2019 Super Bowl, we’re sure you weren’t doing so on the same flight as Rihanna who shaded the Super Bowl and a fellow first-class passenger who was gung-ho on watching the game on their flight last night.

In a series of Instagram stories, Rihanna labeled a blonde-haired woman as a “weirdo” for wanting to watch CBS’s Super Bowl LIII on their flight on Sunday, February 3. The stories showed Rihanna with sunglasses on and her signature deadpan face, not-so-subtly judging a passenger a few rows in front of her who was wondering how to watch the Super Bowl on their in-flight TV. Of course, course, this shade was shared with Rihanna’s 67.2 million followers.

The nine-time Grammy winner was actually the NFL’s first choice to headline the halftime show for Super Bowl 53 this year, but she “declined” the offer out of support for Colin Kaepernick, who many believe to be blackballed by the NFL after he kneeled during the National Anthem in protest of police brutality and racial inequality in America. A source told Us Weekly, “The NFL and CBS really wanted Rihanna to be next year’s performer in Atlanta. They offered it to her, but she said no because of the kneeling controversy. She doesn’t agree with the NFL’s stance.” 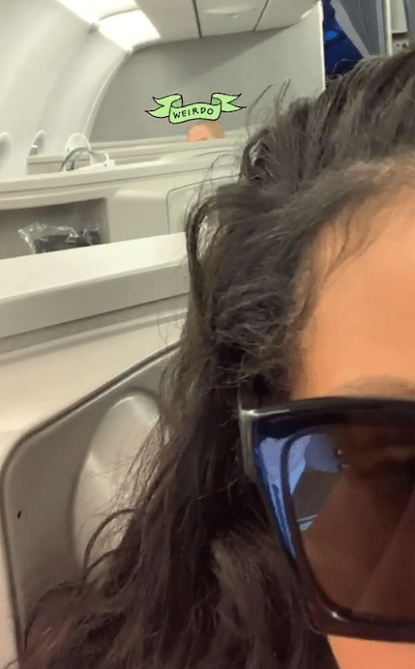 Given Rihanna’s obvious opinions about the Super Bowl, we’re curious to know what she thought of Maroon 5’s performance during last night’s 13-minute halftime show. While it’s easy to assume that Rihanna didn’t watch, we’re pretty sure she’s heard some of the buzz by now. Twitter was relatively divided about this year’s halftime show. Some were thrilled to see the lead singer, Adam Levine, slowly take off his clothes, wWhile others were quick to criticize and poke fun at the 39-year-old singer who, admittedly, did have dad dance moves.

One Twitter user wrote, “The best part of the halftime show was the face that it’s now over. #superbowl #superbowl2019.” Ouch! Talk about a harsh critic.

Another user went for Levine’s outfit choice writing, “I mean, you can wear whatever you want when you’re Adam Levine. I’m just saying performing at the Super Bowl is a once in a lifetime event. Throw that gold sequin tuxedo on, ya know? My man’s dressed like he hit the sale rack at Urban Outfitters.”

Other fans were quick to point out that Levine’s tank top actually looked like it came straight out of a living room catalog from the 1970s. One Facebook user posted, “when Adam Levine is wearing your throw pillow!! I’m dead.”

And one Twitter user went as far as writing a script for how Levine must have chosen his outfit for last nights’ game. Give it a read—it’s pretty funny!

Others were commenting on Levine’s sexual performance. Jordan Payton tweeted, “Adam Levine is now facing a class-action lawsuit after he steals approximately 100 million girlfriends nationwide during the Super Bowl.” Haha—good one.

He definitely did break some hearts up there! “Adam Levine is so fucking hot, WOW” one fan enthusiastically tweeted. “His tattoos make him 10000x hotter “

She’s not wrong! The man has definitely got swag. And while most were ecstatic about the singer’s choice to remove his many layers, Today’s Al Roker quickly joked, “If @adamlevine takes off his pants I am gone.” Luckily for Roker, the lead singer kept his pants on.

Regardless of what you thought of the performance, you have to admit Levine did rock the shirtless look. And even though his dance moves definitely reminded us of The Office‘s Michael Scott, it was a solid performance.

We’re not sure Rihanna would agree though, and knowing the singer, we’re pretty sure she’ll share her thoughts sooner rather than later.