Can Chris Brown leave Rihanna alone? Nine years after their breakup, the 29-year-old singer is still leaving comments on his ex-girlfriend’s Instagram. The most recent one was on Friday when Brown commented an emoji on a picture of Rihanna topless in bed in lingerie.

The picture, which promoted the 30-year-old singer’s new Savage x Fenty collection, featured her in hot-red underwear, tights, heels and sleeved gloves. In usual Rihanna fashion, the picture was pure fire, so it was no surprise that thousands of fans commented on it, thirsting over Rihanna’s beauty. One such comment was from Rihanna’s ex-boyfriend, Brown, who left a simple emoji: 😳.

MORE: A Quick-and-Dirty Workout From One of Rihanna’s Go-To Trainers

Given Brown’s history with abuse and domestic violence (he was charged in 2009 after he physically assaulted Rihanna), fans weren’t happy with his comment and his continued communication with Rihanna. One such fan commented, “STAY AWAY FROM HER,” while another added, “Dude you f—ked up real bad with her.” Another fan criticized those defending Brown and pushing him to reconcile with his ex. “@chrisbrownofficial everyone saying get her back must have forgot the picture of her after he beat the s–t out of her. She deserves better !” the fan wrote.

But what was Rihanna’s response? Soon after Brown’s comment, the singer took to her Instagram story with a cryptic message about “moving forward.” The Instagam story featured a Bible verse, with an inspiring message. “There may be times when it seems that you cannot go forward, but at least you do not have to go backward,” the message read. “You may not know how to forge ahead, but you can stand firmly on what you know of God.”

It continued, “Instead of passively yielding to the enemy, you can say ‘This is the ground I have gained, and I’m not giving it up, devil. You are not driving me back into the hole that God pulled me out of. I am going to stand strong in the power of God until He delivers me.’” 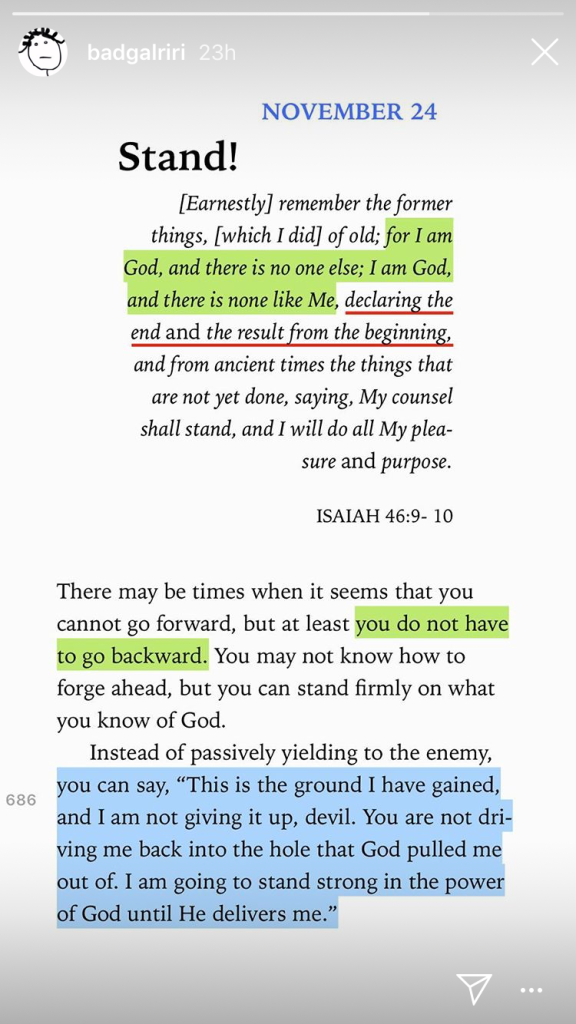 MORE: 10 Hit Songs That You Didn’t Know Were Almost Sung by Rihanna

Who knows if Rihanna’s Instagram story was actually directed at Brown, but the timing sure is coincidental. Either way, the lesson here is for Brown to leave Rihanna alone once and for all. In the words of Demi Lovato,” GET A JOB. STAY AWAY FROM HER.”