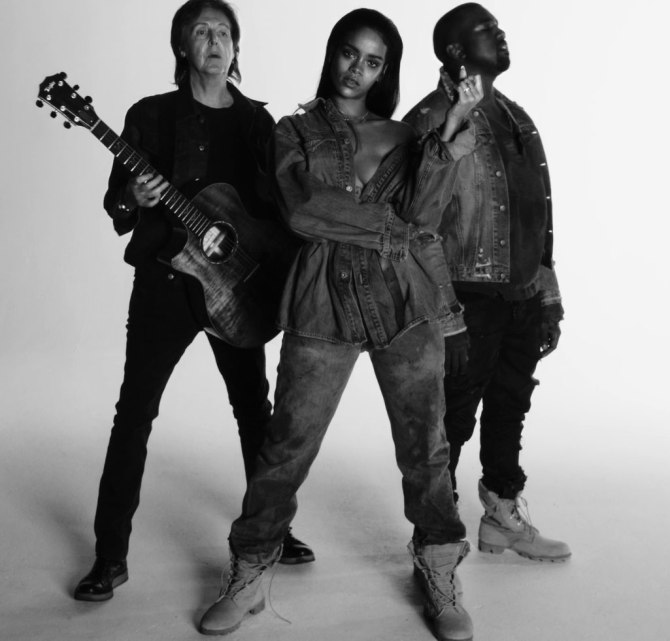 The buzzed-about video for Rihanna‘s collaboration with Kanye West and Paul McCartney is here—and it’s way more pared back than we expected.

The trio recently collaborated on an acoustic, surprisingly folksy song, “FourFiveSeconds,” which was released to iTunes last week.  The track’s music video was released this morning and features 72-year-old Paul McCartney on guitar, with Kanye taking a departure from rapping to croon along with RiRi on vocals.

The video is surprisingly minimalist–particularly when compared to Kanye and Rihanna’s recent music videos. Without the aid of carefully choreographed backup dancers or spangly outfits, the trio performs against a stark white backdrop and the focus is firmly on the vocals. Rihanna’s silhouette kicks off the clip, before the songstress comes into focus and her seriously simple look is revealed: An unbuttoned, belted utilitarian denim shirt, baggy jeans, heavy boots, straight hair, smokey eyes, and dewy skin.

Watch the video for yourself below:

Ahead of this morning’s release, Rihanna shared two snippets of the video with her 14.7 million followers yesterday and overnight.

She captioned the first clip with just the word “mood,” but gave the second video a little more context, writing “#FourFiveSecondsVideo sneak peek…first Official video from my new album premieres tomorrow Feb 3 at 9am EST. (6am PST.) on @VEVO!! #KanyeWest@PaulMcCartney @inezvinoodh”