Stepping out in the same outfit as another celebrity might be cause for concern for some stars, but for Rihanna and Kaia Gerber—who are both undeniable bosses in their own right—it’s nothing to sweat about. On Wednesday, the 29-year-old singer posted an Instagram of herself sporting an oversized beige button-up, light-washed high-waisted jeans, and adorable white heeled booties. She paired the look with a neat topknot, a mini Louis Vuitton trunk, and tons of gold jewelry.

As fire as Rihanna looked, she wasn’t the first star to the don the ensemble. In September, two weeks before Rihanna’s Instagram, Gerber sported the exact three pieces when she walked the runway at Virgil Abloh’s Off-White Spring 2018 fashion show at Paris Fashion Week.

Though the 16-year-old model’s look didn’t include Rih’s sunglasses or the same smattering of bling, the two did share similar slicked-back hairstyles and three identical pieces. The only key differences were Gerber’s matching denim belt and her hair, which was tied back in a sleek braid rather than a bun. 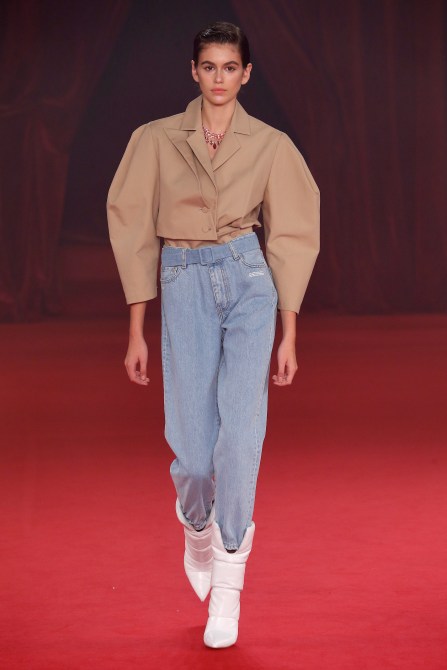 But before anyone sparks the “Who Wore It Better” debate, the two looked equally as fab. Besides, there’s no bad blood between the stars, considering that Gerber walked in Rihanna’s Fenty Puma runway show at New York Fashion Week last month. So leave the unnecessary comparisons at the door because there’s more than enough room for two celebrities to slay in the same outfit.