Being the current reigning queen of the music industry means you have access to any brand your heart desires. But what Rihanna desires is something a little different. Something a little less well-known.

Where many stars work primarily with big-name brands, Rihanna consistently champions the young up-and-comers, mixing their more creative wares with custom pieces from the likes of Balmain and Dior. For these relatively unknown designers—who are sometimes just out of college—exposure from someone like @badgalriri can be invaluable. It can be the difference between failure and success, leading to more A-list appearances, more magazine shoots and hopefully, enough sales to grow a viable brand.

In the past few months, Rihanna has worn pieces by a number of recent fashion graduates. Just last week, the singer donned a stand-out velvet puffer coat from 23-year-old designer Ella Boucht’s graduate collection, while opting for a pinstripe jacket made by the still-studying Snow Xue Gao for the Global Citizen Festival late last month.

Mel Ottenberg, the singer’s long-term stylist, appears to be the catalyst that sets it all in motion, according to 2016 Parsons graduate, Ya Jun Lin. She was thrilled to see Rihanna wearing her oversized black coat on stage at the 2016 MTV Video Music Awards, one of music’s most high-profile events. Lin first met Ottenberg after winning the Parsons x Kering design competition, where he was a judge. Part of the prize included having her graduate collection displayed in the windows of Saks Fifth Avenue, where her jacket was spotted by Ottenberg’s assistant.

“Mel contacted me after the judging to use [the jacket] in a music video, but it had to be displayed in Saks’ window. It was a month before the VMAs that he asked for it again,” says Lin. Unsure whether her design would actually end up on Rihanna, Lin was “super happy” to find out her dreams had become a reality: “I was watching the VMAs, then during the performance of ‘Needed Me,’ I saw Rihanna in my jacket. Although it was only a few seconds, it was incredible!”

Coincidentally, Rihanna was Lin’s muse throughout the designing of her entire collection, and following the performance, the singer also gave her the confidence to focus on her own label. “Right after graduation, I had been approached by some PRs, but I have to say, it was after Rihanna wore the jacket that I really decided to work on my own brand. People who were interested in my designs were emailing me and DMing me on Instagram,” she explains. Since the VMAs publicity, Lin has officially launched her line, recently presenting it during New York Fashion Week at The Roxy Hotel. 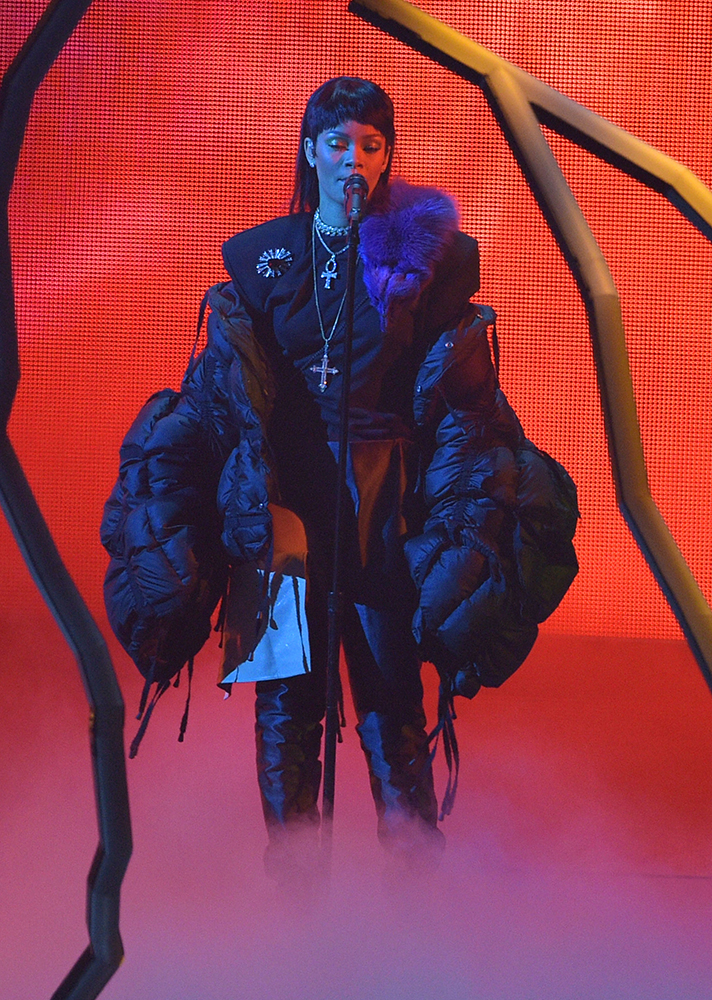 Rihanna wearing Ya Jun Lin at the 2016 VMAs
Getty Images

And she’s not the only one who can thank Rihanna for setting them on the right course. NASASEASONS, a hat brand started by Parisian teenager Alexandre Daillance (who also goes by “Millinsky”), managed to get Rihanna in one of his designs embroidered with the phrase “I Came to Break Hearts.” You may recognize the slogan because it’s been adopted—most would say copied—by several high-street retailers, including Forever 21. Speaking to Dazed, Millinsky said: “If you search online for ‘I came to break hearts’, you can find many brands selling fakes. I know that some physical stores in LA and Asia have been selling fake NASASEASONS. It all started a month after Rihanna was seen wearing my hats.”

While he recognizes that big corporations will likely see more profit from his (copyrighted) slogan than he ever does, he also sees it as validation for his work. “Since there are so many fakes that also sell out quickly, I guess thousands of people have been buying my hats in some way,” he tells Dazed. “It’s crazy because it’s such a simple idea—to put a phrase on a hat—but damn, people like it so much.”

While some of the outfits Rihanna wears seem to be the result of a last-minute request by her stylist, others are the product of a more painstaking process. London-based menswear designer Craig Green was asked to create several custom pieces for the singer’s “Anti” tour. He made multiple versions of a hooded cream coat in order for Rihanna to have a fresh one available each night. “It’s so beneficial to have that kind of support. It means that my work reaches a different audience—plus my mom and sister actually know who Rihanna is,” he told the Telegraph.

People use the word “support” a lot when it comes to Rihanna and her eclectic fashion taste. The singer has worn pieces by jewelry designer Jacquie Aiche for a number of years, and even collaborated with her on a set of metallic gold temporary tattoos. “She had an epiphany on vacation and texted me with the idea to collaborate. She was very much a part of the creative process the whole way,” says Aiche.

Recently, the designer created several bespoke pieces for Rihanna’s “Anti” tour, including a choker and a set of huge hoop earrings. “The first time I saw Rihanna wearing my jewelry was in the Vita Coco ad [she did in 2011]. I knew it had found the perfect home,” she recalls. “In addition to being a muse to me, she’s an amazing person who has the sweetest heart. She’s impacted me on so many levels.” Today, Aiche’s roster of celebrity fans has expanded to include names like Gigi Hadid, Emily Ratajkowski, and Rosie Huntington-Whiteley. 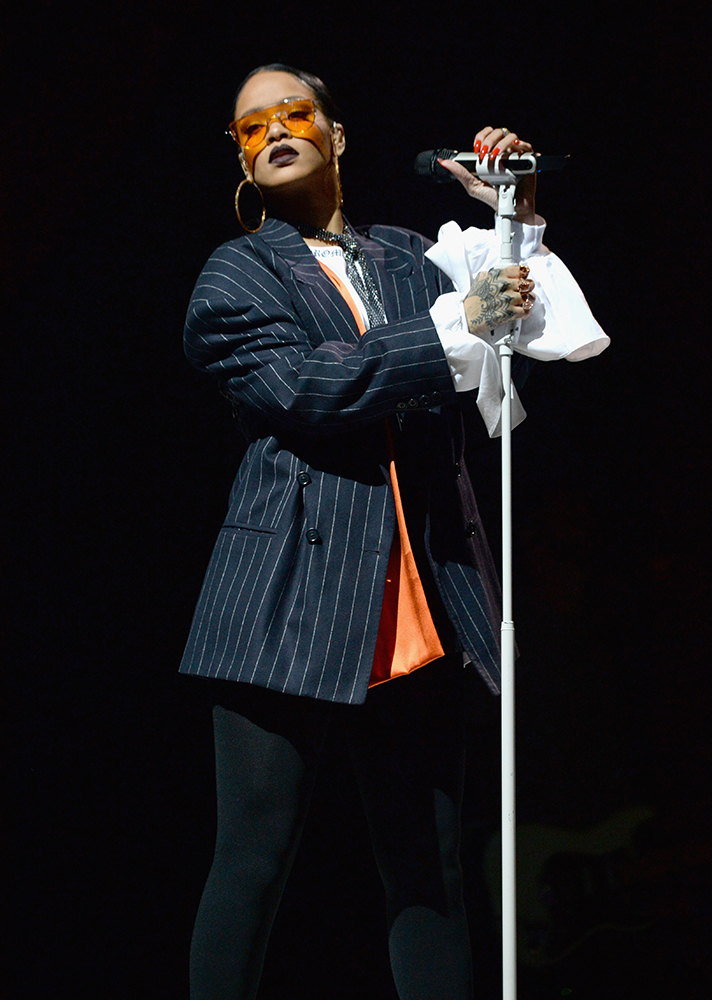 Designer Adam Selman may be the most well-known beneficiary of Rihanna’s friendship. After meeting the singer in 2011 through his boyfriend, Ottenberg, Selman—who had previously designed some of Britney Spears’ and Lady Gaga’s most well-known tour costumes—began creating looks for Rihanna both on and off the stage. Publicity surrounding his name escalated to another level, however, after he designed the singer’s near-naked 2014 CFDA Awards dress, using over 230,000 Swarovski crystals and not much else, resulting in the most-Googled red-carpet look of the year.

MORE: 50 Ways to Style That Tour Merch You’ve Been Buying All Summer

“If something is Rihanna-approved, it’s [like having] magic dust sprinkled on you,” Jaclyn Hodes, the designer behind Awaveawake, told Vogue after the singer chose her slip dress for a dinner in December last year. Recent Parsons graduate Matthew Adams Dolan agrees. A denim aficionado, his oversized aesthetic has made him a favorite of the pop star. “Rihanna has such a huge cultural pull,” he said. “There are so many websites and Instagram accounts dissecting every outfit she wears. The biggest impact has definitely been being able to build a relationship with Rihanna and her team, who are all incredible.”

It seems that when Rihanna’s got you, she’s got you for life. Now that’s one relationship worth holding onto.