Now that we know she’s pregnant, many of us want to know Rihanna’s due date to get an idea of when we can expect to see a mini Rih out in the world. Judging from her first maternity shoot, Rihanna’s due date may be coming along quicker than you’d expect.

Rihanna, 33, debuted her baby bump for the first time in January 2022 during a photoshoot alongside her boyfriend ASAP Rocky, 33, in Harlem, NY. In the photos—which you can see here—the “Love on the Brain” singer wore low-rise jeans and a long pink puffer jacket, which she unbuttoned past her belly button to show off her growing bump. ASAP, for his part, wore a denim varsity jacket and leather pants, and could be seen kissing Rih on the forehead in one of the shots.

While neither Rih nor ASAP made a formal statement about the pregnancy at the time, celebrity photographer Miles Diggs subtly confirmed the news after taking the photos. Diggs took to his Instagram account to share one flick from the shoot, which zoomed in on Rihanna’s bump. He captioned the post, “SHE IS,” otherwise assuaging any and all doubts on the matter.

Before becoming expectant parents, the Fenty Beauty founder and the “Praise the Lord” rapper officially started dating in 2020. The pair, who became friends in 2013 when he opened for the U.S. dates of her Diamonds World Tour, fielded romance rumors for years prior to this. Speculation about their relationship status reached a fever pitch following the “Umbrella” singer’s split from her previous boyfriend, billionaire Hassan Jameel, in January 2020 after three years of dating. Months later, People reported that Rih and ASAP were dating—but it wasn’t until the following year that the couple publicly confirmed their relationship.

In May 2021, ASAP was the one to discuss their relationship for the first time in an interview with GQ for their June/July 2021 issue. The “1Train” rapper openly gushed about his “lady,” calling her “the love of my life” during the interview. “[It’s] so much better when you got the one,” he also told the magazine at the time. “She amounts to probably, like, a million of the other ones. I think when you know, you know. She’s the one.”

During his chat with GQ, the “Babushka Boi” rapper also hinted at his plans for starting a family with Rih. When asked about his thoughts on fatherhood, ASAP replied, “If that’s in my destiny, absolutely.” While he didn’t mention the Fenty founder outright, ASAP did reflect on what kind of dad he would be—and how he imagined his future child would turn out. “I think I’d be an incredible, remarkably, overall amazing dad,” he said. “I would have a very fly child. Very.”

Less than a year later, that fly child is already on the way. But how soon can fans expect to see them? For everything we know about Rihanna’s due date, keep on reading below.

When is Rihanna’s due date? 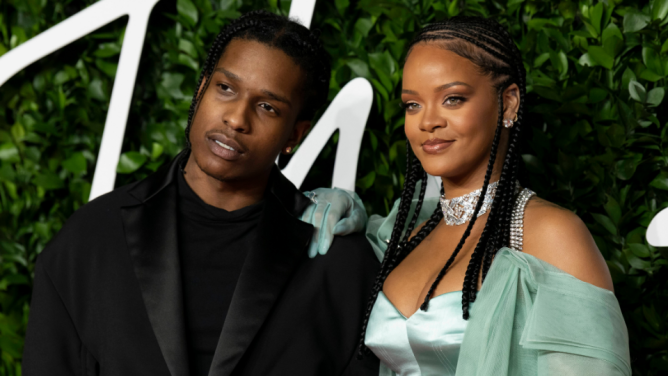 So, when is Rihanna’s due date? While Rihanna hasn’t revealed her exact due date to fans, the Fenty Beauty founder shared how far along she is during an interview with Elle in March 2022. At the time, she told the outlet that she was already in her third trimester: “There’s also those days, girl. Especially in the third trimester where you wake up, and you’re like, oh, do I have to get dressed? Makeup for sure helps you feel like a real person,” she said.

This likely puts Rih at around the seven or eight-month mark of pregnancy, meaning her due date could be sometime in April or May 2022. This lines up with what sources previously revealed to Us Weekly in February 2022, when they shared that the “Umbrella” singer is due in the spring. At the time, the insider revealed that Rih and ASAP “shared the exciting news with trusted confidants about a month” before their announcement. “They’re both very excited,” they added at the time, noting that Rih and ASAP wanted to keep their pregnancy a secret “until they basically couldn’t” anymore.

Prior to Rih and ASAP’s pregnancy announcement, the pair had fans speculating they were expecting a baby for months. The rumors took off in September 2021, when Rih and ASAP attended the Met Gala together in New York City. The pair were among the last guests to arrive at the function, and notably, Rih wore an oversized, custom-made gown by Balenciaga. While some fans didn’t make much of the style choice at the time, in hindsight, it’s possible that Rih may have chosen the dramatic ensemble for the way it camouflaged a growing baby bump.

The following month, Rihanna sparked pregnancy rumors once again when she visited her homeland of Barbados, where she was honored as her country’s National Hero. During the award ceremony, Rih wore an orange slip dress that clung to her waist. Interestingly, Rihanna held her hands around her midsection and noticeably positioned her stomach out of view whenever she had the chance.

Now, it’s clear that Rih was indeed pregnant at the time—and now we know she’s due sometime this spring! Of course, even due dates can sometimes differ from when little ones actually decide to enter the world; so we’ll really just have to wait and see.