It should be well-known by now that Rihanna gives zero fucks for what anyone has to say about her body. But in case that wasn’t clear, the 29-year-old made sure to shut down body-shamers once and for all with a single Instagram comment that made us go, “YASSS.”

The comment was in response to a fan’s Instagram video showing the singer shopping for junk food with her friends. In the video, Rihanna picks up four snacks. When one of her friends tries to guilt her for it, another comes to her defense.

MORE: The Internet Isn’t Having a Sports Site Fat-Shame Rihanna

“You just walked in the store and you already have four snacks!” one friend says.

“Stop judging her!” the other replies.

In the video caption, the fan mentioned that body-shamers were comparing Rihanna’s recent thicker body to Rob Kardashian‘s weight gain. She advised them to take Rihanna’s friend’s advice and mind their own business “Everybody who calling rob too fat @mdollas11 telling you what to do in this video K !! #mindyourown#eatallyouwant @badgalriri i got you like melissa 🙋🏻👑” the fan wrote.

MORE: Rihanna Claps Back at Fat-Shamers With Instagram Meme

And even though the fan definitely has Rihanna’s back, of course Rih had to chime in with her own comment to let critics know she couldn’t care less about their opinions.

“Somebody called me too fat? 😂😂😂,” Rihanna commented.

And just like that, with five words and three emojis, Rihanna shut down fat-shamers and sent a much-needed message to women everywhere: Trolls can judge and criticize all they want (particularly from the safety and anonymity of their social media accounts), but by calling out and dismissing them, you can take away their power. Way to set an example, Rihanna. 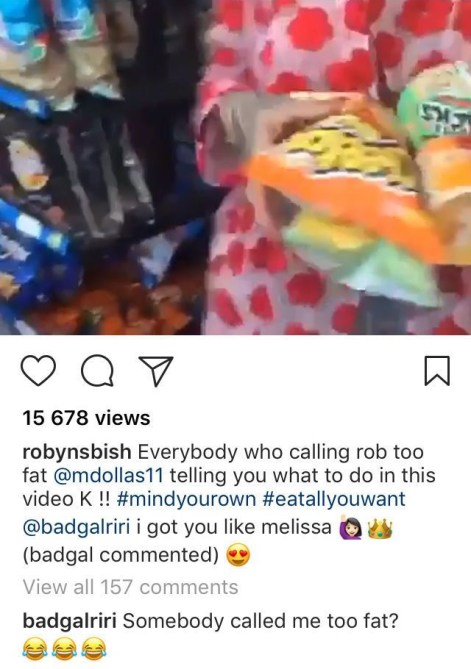