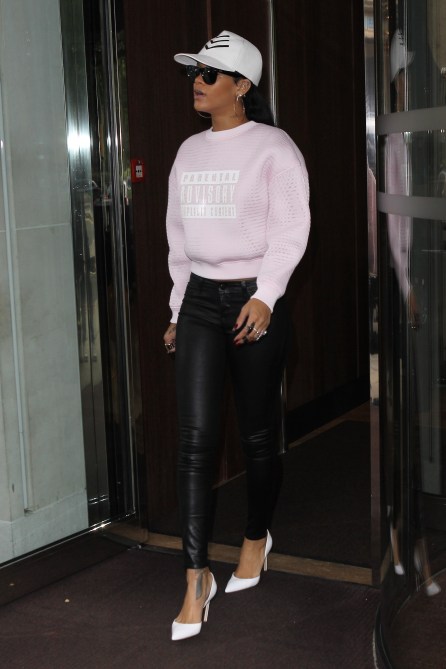 While celebrities, top editors, and filthy rich fashion fans are just getting their hands on the Fall 2013 collections, Rihanna wants to remind everyone that she’s just a little bit better than all of us. The 25-year-old superstar may stir up tons of controversy, but that doesn’t mean that designers everywhere don’t clamor to dress her. (In fact, just today she took to Instagram to post shots of new gifted Stella McCartney goodies and a rather outrageous Vivienne Westwood clutch embossed with a shiny penis. Naturally, she’s already dubbed it her “c*ck clutch.”)

More: See Every Look Rihanna Wore from the Spring 2013 Runways

Anyway, aside from the hoards of freebies that get sent her way, she also snags designer duds that are quite literally fresh off the runway (or “Phresh Out the Runway,” as one of her recent songs proclaims). Alexander Wang sent RiRi the buzzy Parental Advisory sweatshirt that traipsed down Wang’s Spring 2014 runway on Saturday, perhaps as a thank you gift for turning up at his after party.

She paired the look with leather pants, white heels, and a white House of Malakai trucker hat for a casual day look in London this afternoon. Want to steal her style? We’ve uncovered a rather similar sweatshirt at Urban Outfitters that probably doesn’t feel as luxe, but it’s certainly on-trend given the recent influx of everything 1990s.

What do you think of RiRi rocking the look months before it will hit stores? We’re not surprised, but we are the slightest bit jealous—especially because she only deemed the outfit worth wearing for a few hours. Below is what she changed into for a night out. Please note the new clutch. 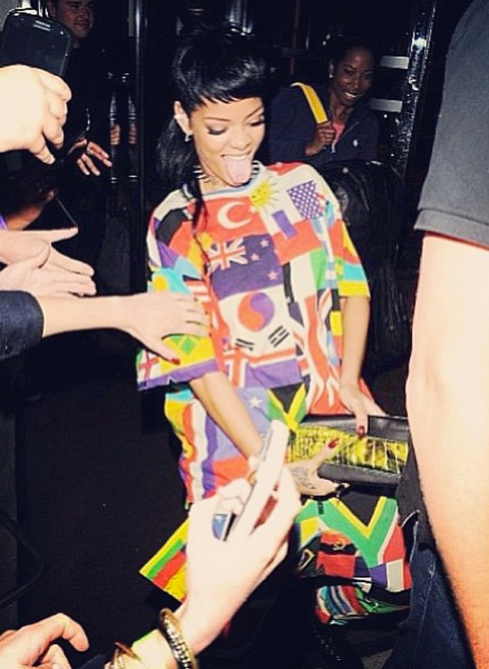