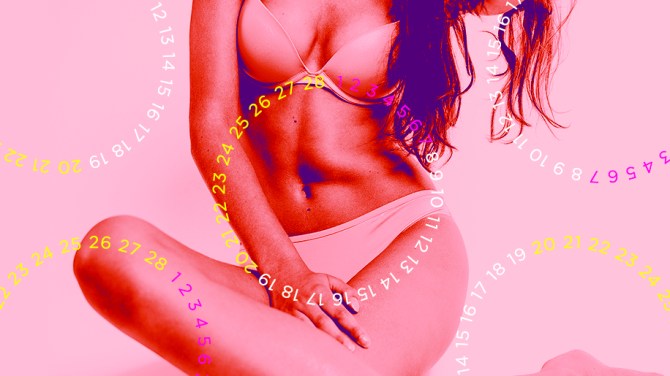 First things first: I tried birth control pills when I was younger, but they just weren’t for me. They made me break out, gain weight, and become unbelievably moody—not exactly a worthy trade for remaining baby-free. It’s a struggle for a lot of women, but it spurred a monumental hormonal change for me that I’m still not convinced has resolved itself completely.

So no pills for me, thanks.

But obviously I needed some kind of BC. Several years ago, when I was living in Santa Fe, I stumbled upon a book at a store called Herbs Etc. (the Southwest is a different world, you guys) that introduced the rhythm method as a viable way to prevent pregnancy naturally, without a single hormone.

I’ve been relying on the method that focuses on monitoring your body and periodic abstinence for eight years running, and, no, I’ve never been pregnant. My ob-gyn says there’s no reason I should be infertile, either.

But why choose a method that only has a typical success rate of 76 to 88 percent? Well, those numbers look at typical use, for starters. If done by the book, that gap tightens to a range of 0.4 percent to 5 percent, according to Bedsider, a pretty awesome website about birth control operated by the National Campaign to Prevent Teen and Unplanned Pregnancy. But that’s a big if. It requires diligent tracking of your hormonal cycle and knowing your body really, really well (more on that later).

MORE: My Love/Hate Relationship with My IUD

People often gape or balk when they hear that I’m not on the pill or another more “reliable” method like the IUD. I think it’s because they’re thinking of the rhythm method of yore which, admittedly, didn’t really work. It was based less in science and more in a general idea of the calendar method, which didn’t take into account any inconsistencies or nuances in a woman’s hormonal cycle.

These days, though, the rhythm method is a process—and a lifestyle.

I asked sex and relationship expert Julie Jeske to help me dive into the little-understood science behind this method. The best way to find out which is right for you is to give them all a shot, generally settling upon two or three methods at once. One way to go, she says, is to use a basal thermometer to take your temperature every morning before you get out of bed, looking for a rise in temperature, which means you’ve just ovulated and are therefore entering your most fertile days.

MORE: 6 Ways You Could Be Ruining Your Love Life

Once you start this method, she says it’s necessary to “track for a few months, in order to see what the ovulation pattern is.” Once you get an idea of your pattern, you’ll be better equipped to know when it’s safe to have unprotected sex and when it’s best to use a backup method of BC, like a condom.

But it’s not just about the thermometer. “It’s best if you also partner this with another method—either checking the position of your cervix or checking your cervical mucus,” says Jeske. Though your temperature spikes just after ovulation (around Day 8 of your cycle), the cervical mucus changes in the days leading up to ovulation, which are the days you’re most fertile.

So how does this all work in preventing pregnancy? Jeske says there’s a limited time an egg can be fertilized each month. Simple enough. So, then, a woman “can track her cycle to know when she is ovulating and use that information to avoid pregnancy.” Also makes sense. And on the days that you know you’re most fertile, either abstain from sex, or use a backup method, like a condom.

MORE: Why Serial Monogamists Are Ruining It for the Rest of Us

This method works for women who are super comfortable with checking their cervical mucus regularly (an arguably tall order), as well as paying close attention to the calendar and noting what their body feels like on a day-to-day basis. “I think one of the biggest risks to using this method is that you have to use it correctly,” says Jeske. “You need to know when you are ovulating.”

It may sound like an overstatement, but being on the rhythm method changed my life, and it makes it possible for me to eschew typical hormonal birth control pills or super invasive and often side effect–heavy options like a nonhormonal IUD.

If you’re the kind of gal who often forgets to take her birth control pill, falls asleep wearing makeup, or isn’t great at remembering to do things in general, this method is not for you. “People have to be diligent and really know their bodies,” cautions Jeske. But if the aforementioned doesn’t describe you, why not give it a shot?