Netflix’s newest dating show, Too Hot to Handle, premiered on April 17. The eight-episode series followed a dozen or so singles as they looked for love on a tropical resort. In the end, someone will receive a $100,000. Sounds like a dream, right? Well, at the end of the first episode, an Amazon Alexa-type device named Lana told the contestants that they cannot kiss, have sex or masturbate, otherwise their prize money will go down. In the end, the final 10 contestants were each awarded $7,500, which was divided from the final prize fund of $75,000. There were also three couples that came out of the show. Among them was Rhonda Paul, a 27-year-old from Atlanta, and Sharron Townsend, a 25-year-old from Camden, New Jersey. 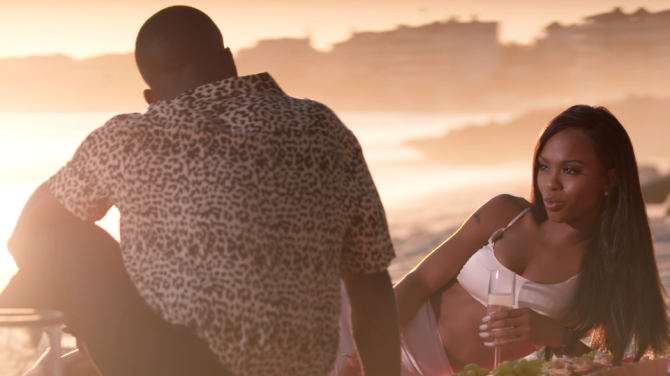 From the first episode, Rhonda and Sharron had an immediate connection. They were the first to kiss on the show, before Lana announced her rules, so their makeout didn’t cost them anything. They had a rough patch in the first couple episodes, though, when Rhonda considered a relationship with David Birtwistle, a 28-year-old from Wigan, Great Manchester. In the end, though, Sharron and Rhonda chose each other. In the finale, Sharron asked Rhonda to be his girlfriend, to which she said “I do.” Rhonda also introduced Sharron to her 2-year-old son, Amare, over FaceTime. So, yeah, by the time they left the show, their relationship was serious. But are they still together?

Good news, Rhonda and Sharron fans. It looks like they’re still together. For one, they both follow each other on Instagram, which is a good sign that they didn’t breakup. Another clue is Sharron’s recent comments on Rhonda’s Instagram. On a recent selfie of Rhonda, Sharron commented, “I’m lucky,” which sounds like a man still in love to us. He’s also liked many of Rhonda’s recent Instagrams, which also hints that their relationship is still kicking. On the flip side, Rhonda has also liked a lot of Sharron’s recent IGs, so our theory is even more proven. While neither Sharron or Rhonda have confirmed their relationship (yet), we’re pretty certain these too are still together. Another dating show win!