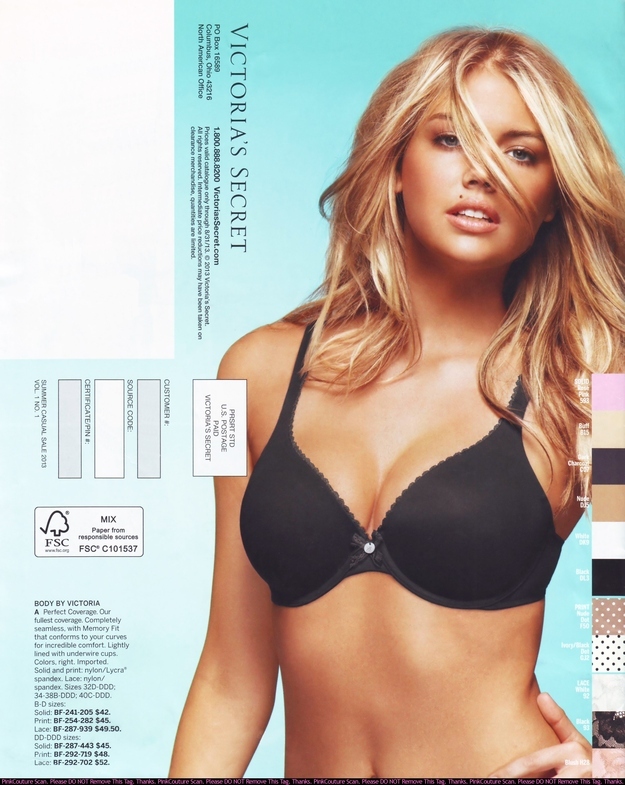 Well, this is some juicy Wednesday morning dish. Yesterday, images surfaced of the latest Victoria’s Secret catalog, featuring none other than everyone’s favorite busty blonde bombshell Kate Upton vamping it up on the back cover. Considering the 20-year-old model’s killer curves and sex appeal, it makes perfect sense that the lingerie giant would want her repping the brand—but it’s all a bit confusing, and here’s why.

Last year, the brand’s model casting director Sophia Neophitou had some less-than-flattering things to say about Upton, who had just been revealed as the 2012 cover girl of the Sports Illustrated Swimsuit Issue. “We would never use Kate … She’s like a footballer’s wife, with the too-blond hair and that kind of face that anyone with enough money can go out and buy,” she told The New York Times. “She’s too obvious.”

We immediately wondered about the sudden change of heart—why had Victoria’s Secret finally accepted Upton and placed her on the very visible back pages of it’s catalogue? Was it the Vogue cover shot by Mario Testino and the second consecutive Sport’s Illustrated Swimsuit Issue?

Nope! According to Page Six, Upton was completely unaware Victoria’s Secret was even using her likeness to hawk lingerie.

“The pictures are from 2011,” a source said. “Kate’s not currently contracted to work with Victoria’s Secret, and they didn’t contact her before they used these images.” The brand has yet to make a statement, but if this report is correct, they’ll definitely have some explaining to do.

This is the latest in a long line of seemingly avoidable controversies for Victoria’s Secret. Last month, model Kylie Bisutti fired off some scandalous sound bites to the New York Post, claiming that she had left behind her life of lingerie modeling with the brand because she’d found God. “That’s when it hit me. I was being paid to strip down and pose provocatively to titillate men. It wasn’t about modeling clothes anymore; I felt like a piece of meat. The next day, I broke down and started sobbing,” she said. The brand stated that Bisutti was greatly exaggerating her time with them—and despite walking in one runway show, was never really an Angel.

Also in April, beloved Victoria’s Secret model Miranda Kerr was reportedly fired from the brand due to her difficult reputation. Although she denied reports of a falling out, she did confirm her contract was coming to an end.

Back in November of last year, they were forced to apologize for Karlie Kloss‘ sexy Native American runway outfit, and even pulled it from the Victoria’s Secret Fashion Show broadcast. Just two months before that, the brand was forced to remove a Geisha-inspired collection—entitled “Go East”—entirely from their website amidst customer complaints.

What do you think of the brand’s latest controversy?