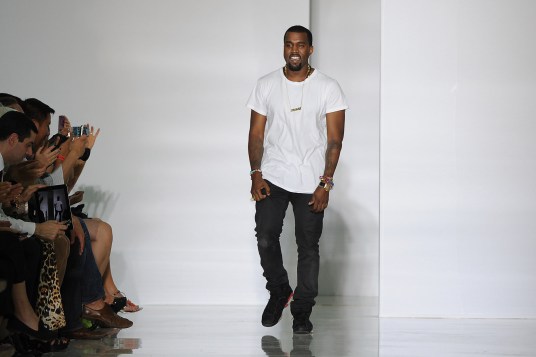 Who cares if people didn’t like his first two efforts at designing a women’s fashion collection, both of which he debuted at Paris Fashion Week? Apparently Kanye West doesn’t, as it seems he simply can’t resist the world of fashion design, and is hard at work at another collection—just days after his capsule collection with French brand A.P.C. (which included a $120 plain white T-shirt) sold out instantly.

According to Page Six, Yeezy is currently in the process of creating a unisex collection that’s set to be around 100 pieces, and will be shown sometime during the upcoming September fashion shows. Apparently, he was working on the new line in Milan for a week before returning home to be with girlfriend Kim Kardashian and their new baby, North West.

This time around, he isn’t going at it alone, and supposedly has a team of experts like Diesel’s Nicola Formichetti advising him. Frankly, we think the third time may be the charm for Mr. West, who seems to have acquired more of a streamlined fashion sense since his last showing at Paris Fashion Week in 2012.

Regardless, we obviously can’t wait to see the results—and have fantasies of Kardashian opening the show on the catwalk. Imagine?