Rebel Wilson has been in the spotlight for more than a decade, but it was only a couple years ago, when she hired Elizabeth Stewart (the stylist behind Julia Roberts, Cate Blanchett and other stars), that designers started to dress her. Before that, Wilson was wearing Adidas tracksuits to events or shopping for red-carpet dresses at department stores, where the sizes were more inclusive, though not by much.

“In the beginning, even though I was an actress and I was on red carpets, you’d find your dress still at Macy’s or Bloomingdale’s in the very-limited-at-the-time plus-size division,” Wilson tells StyleCaster. “It’s great those stores now have a lot more options. But still, it’s really only 10 percent of the clothes.” 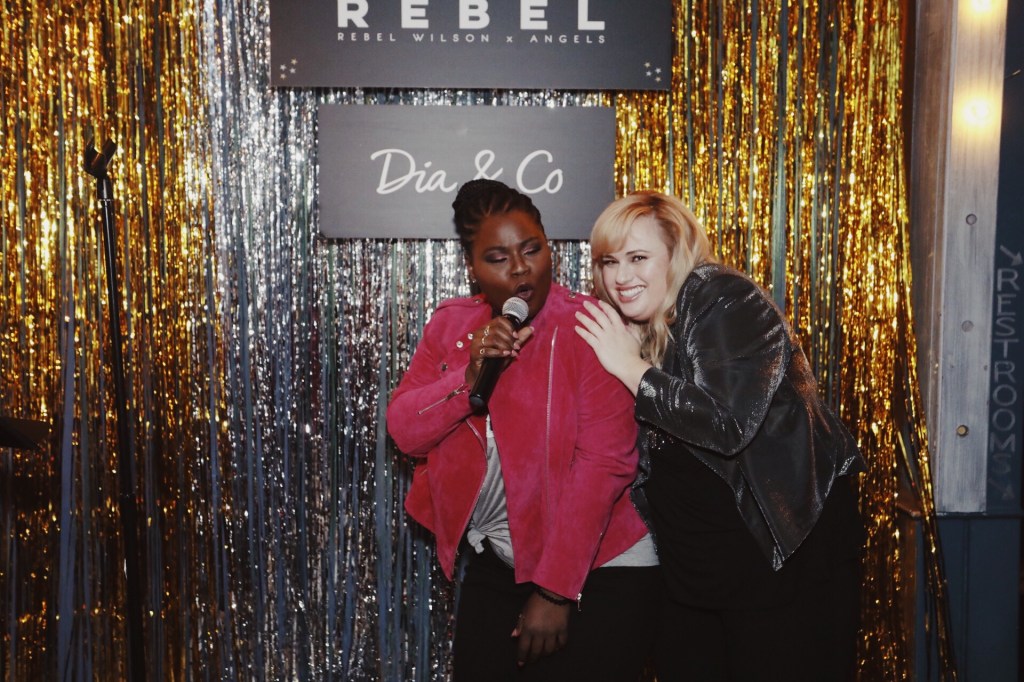 Wilson’s “harrowing” relationship with shopping dates back to her teens, when she struggled to find clothes that fit—despite being a size 16 to 18, the average size for women in the United States. “It was like hell. It was so embarrassing,” Wilson says. “At that time, and especially in Australia, they didn’t even have female jeans sizes in that size, so you’d have to buy men’s Levis. That’s really bad.”

It makes you feel gross or excluded or like fashion isn’t for you.

Wilson’s history with shopping is one of the reasons she created her size-14-and-up clothing line, Rebel Wilson x Angels, in 2017. The line, which is sold at retailers like Nordstrom and Dia & Co., recently launched its second collection, a 34-item holiday collection, available in sizes 0X to 3X. “When I used to go shopping with my mum, it would always be a harrowing experience where I would end up crying, and I would hate shopping,” Wilson says. “Things you thought looked cool didn’t fit when you tried them on. It makes you feel gross and excluded or like fashion isn’t for you. With Rebels x Angels, I want people to feel included.”

But for Wilson, expanding to more sizes wasn’t enough. She wanted to design clothes that she and other plus-size women would wear, which is why most of her designs are bodycon—to combat the misconception that plus-size women want to “hide” their bodies or are “ashamed” of them. “I’m someone who likes clothes that are called bodycon, which means it goes to the curve of your body, and I think they look so much more flattering, so I don’t really want to hide any part,” Wilson said. “You want to celebrate your body. There’s a misconception that all plus-size women are ashamed of their body or are ashamed of certain parts of their body.”

There’s a misconception that all plus-size women are ashamed of their body.

As for whether Wilson is still struggling to find designers to dress her, we’ll let her answer that question herself. “Givenchy is creating a custom outfit for something next week, and they’re the best fashion house in the world. So I’ve really come a long way,” Wilson said.

Still, she loves shopping at department stores for the Pretty Woman moments she didn’t have growing up. Armed with a better understanding of her body and a mission to promote size inclusivity, Wilson has a far different experience with shopping now than she did when she was younger: It’s fun and most definitely for her. “The other day, I was filming some reshoots on my movie, Isn’t It Romantic. I was like, ‘Let’s just go to Saks Fifth Avenue and do a shopping spree,’” Wilson says. “I felt like Julia Roberts in Pretty Woman. I was like, ‘Yeah! Let’s do this!.’ Now, because I know more and I know what looks good on me, I’m a lot more comfortable in those environments.”

You don’t have to wait until you lose weight to have style.