If you watched the premiere of Gossip Girl 2.0., you may be wondering who Rebecca Sherman was in Gossip Girl, the original. Rebecca was introduced in the first 10 minutes of the Gossip Girl reboot as a teacher at Constance Billard, a private school in New York City’s Upper East Side where the characters in both the original and revival were students.

During the scene, another teacher, Kate Keller, talks to the other staff members about how Constance Billard was built by legacy students like Nate Archibald (a.k.a. Chace Crawford’s character in the original Gossip Girl.) That’s when Rebecca turns around and tells Kate that she was once a student at Constance Billard with Nate, who wasn’t always the “saint” he’s remembered as now.  “It’s not like Nate Archibald was such a saint when he started. When I was a student, we lived under constant threat. People like Nate were scared straight,” Rebecca says.

Rebecca then confirms that she graduated from Constance Billard in the class of 2019, along with Nate and other original Upper East Siders like Blair Waldorf, Serena van der Woodsen, Chuck Bass and Dan Humphrey. So who is Rebecca Sherman in Gossip Girl? If her face and name don’t sound familiar to you, there’s a reason why. 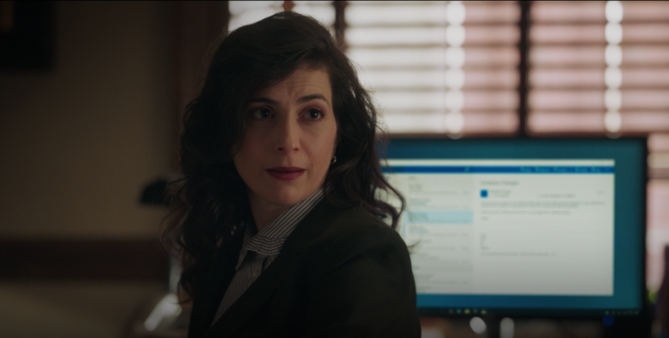 Who is Rebecca Sherman in Gossip Girl?

If you don’t remember Rebecca from the original Gossip Girl, don’t worry. She wasn’t a main character in the OG series, which ran on The CW from 2007 to 2012, but she was real. Rebecca’s name was mentioned once in season 2, episode 25 when Nate, Blair, Chuck and Serena discuss who could be Gossip Girl. “Rebecca Sherman? No, her head’s always in a book. She’s not paying enough attention,” Blair says as Chuck shows her Rebecca’s Facebook profile. It’s unclear if the actress in the Facebook profile is the same actress who played Rebecca in the reboot. According to IMDb, the Rebecca in the reboot is played by an actress named Sarah Baskin, who has starred in shows like The Marvelous Mrs. Maisel and Divorce. (He IMDb doesn’t list the original Gossip Girl as a credit.)

In an interview with The Wrap, Joshua Safran, the showrunner and creator of the Gossip Girl reboot who was also a writer and an executive producer on the original, revealed that Rebecca’s character was an Easter egg for fans.

“It’s such a very deep Easter egg, I assumed that nobody would know. Unfortunately, her full name would make you know her if you Googled it. But I couldn’t get her full name in. I tried and I just couldn’t say, ‘Rebecca Sherman, you went to school here?'” he said.  “But Rebecca Sherman is the name of the character at the end of Season 2 that they briefly think could be Gossip Girl before they think that it is Eric’s boyfriend.”

Still, while Rebecca may not have been a main character in the original Gossip Girl, she seemed to know enough about what happened in the OG series. While in the teacher’s lounge in the reboot, Rebecca describes Gossip Girl to the other teachers”an Orwellian Big Sister that kept tabs on the students it deemed important.” She also tells the teachers that her peers once though that she may have been been the person behind Gossip Girl’s blog, which is true, as seen in the season 2 finale.

So there you have it. That’s who Rebecca Sherman was in Gossip Girl.

The Gossip Girl reboot is available to stream on HBO Max. Here’s how to watch it for free.