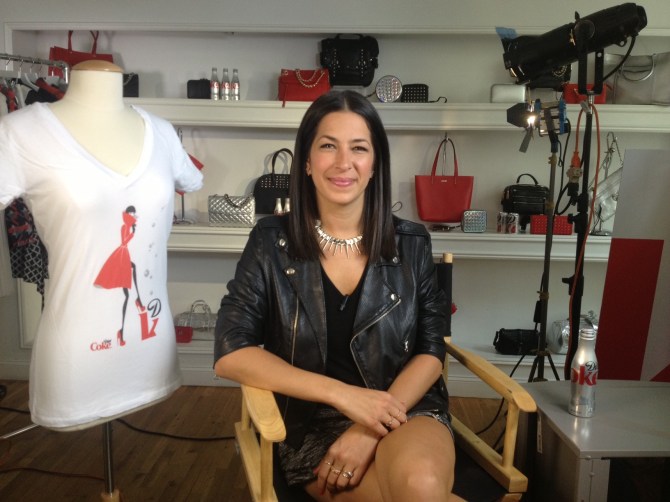 Designer Rebecca Minkoff is one busy woman. In addition to designing her namesake line of bags and clothing, being wildly active on all forms of social media, and raising a toddler, she’s picked up another project: Judging Diet Coke’s second annual Young Designer Challenge.

The challenge, which is a partnership between Diet Coke and Target, invites up-and-coming designers to create a T-shirt inspired by both the Diet Coke logo and the style of brand spokeswoman Taylor Swift. The winner—chosen by Minkoff—will be announced this summer and will have their design sold at Target stores nationwide, as well as score a cool $10,000 in cash, and have the chance to meet Swift.

We sat down with Minkoff in her New York City studio to talk about the collaboration, her must-have color for spring, and the first big purchase she made when she was just starting out (it’s really sweet!).

How did you get your big break?
My shirt was on the Jay Leno show—he talked about the actress that was wearing it; that enabled me to leave my job and start designing. I made T-shirts everyday for eight months on the floor, but it enabled me to have my own clothing line.

Who was the actress?!
It was Jenna Elfman! She was on “Dharma & Greg” at the time.

What are you looking for in this year’s winning design?
I’m looking for uniqueness, creativity, and while you’re going to use the colors and incorporate the Diet Coke logo—do something that’s unexpected.

What was your first big purchase after you started selling  big?
Man, I don’t know. I never really went out and purchased something big, because it always felt like even though we were selling really big, it took a long time before I could make any big purchase.

Did you have an “a-ha” moment when you realized how successful the line was becoming?
Yeah, I think when I got married to my husband, the fact that we could go on a honeymoon and pay for it was a really big deal. We were in Italy, and it was incredible.

I know you’re a big social media person. Why is it so important to you and your brand?
I’m the oldest of the millennials—I just made the cutoff! This is how my customer gets her information, and this is how I get my information. So, if I want to be in touch with her, and I want to know what she’s thinking and liking and doing, then that’s how she communicates. That’s the language we use.

What’s a recent example of using social media to your advantage?
We just teamed up with The Purse Forum. They’re great. We both started around the same time, so their blog was around, I saw the girls talking about me, and then I made a login and started talking about them, and then that relationship to this day is really close. We sometimes do contests via Instagram and Twitter. And scavenger hunts and stuff.

What’s your one must-have for spring and summer?
For the spring, it would be [anything] mint. Mint has been a really strong color for the spring, [and] I’ve been selling a ton of mint bags and mint-colored clothing! Also for the summer, easy flowing dresses in bright colors.

Submissions for the contest are being accepted until May 31, so head over to  head over to dietcoke.com to submit your own design!