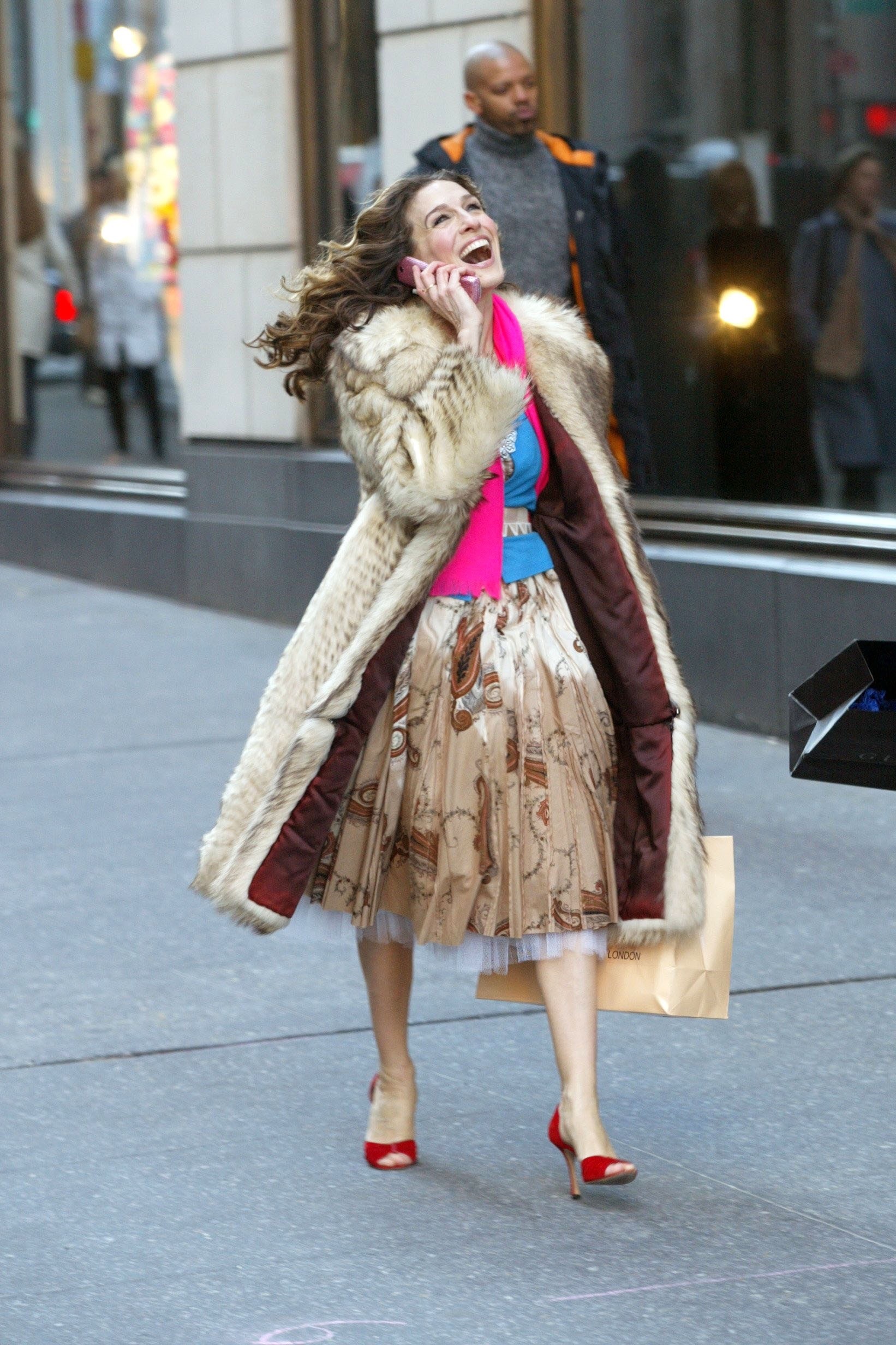 If you’ve come here looking for another serious treatise on the many misgivings of Sex and the City—how it disappointed me, lied to me, provided me with false hope, insulted my gender’s integrity, or made me feel like a female freak of nature because I’m not constantly surrounded by three fawning friends—you might want to move right along. The fact is, I love “Sex and the City.” Like, really love it.

I genuinely enjoy watching the same episodes over and over (and over). I have my favorites (“Ex and the City,” “A Woman’s Right to Shoes”), the ones I promptly delete when they hit my DVR (“My Motherboard, My Self”—snore, “Four Women and a Funeral”), and the ones that make me cringe (anything having to do with Berger—except for “The Post it Always Sticks Twice” because he’s not in it)

I’m not a “Sex and the City” aplogist, because there’s nothing to aplogize for. It is and always has been frothy entertainment, and—in my opinion—should be treated as such. It wasn’t a documentary about how the female species survive a bustling metropolis. It’s never served as the “nucleus of my dreams,” nor has it been “the backbone of my brunches.” I don’t even like going to brunch.

If women were tricked into thinking moving to Manhattan meant a faucet of Cosmopolitans, a right to own a closet full of Manolo Blahniks, and live in a brownstone apartment on the Upper East Side—all on a “job” that involves writing 200 words once a week—whose fault is that? Dudes didn’t watch “Entourage” and moan about how it lied to  them; how the fact that Vince and the boys drink, run around L.A. having sex with hot starlets, and generally act like douchebags is an affront to males everywhere. 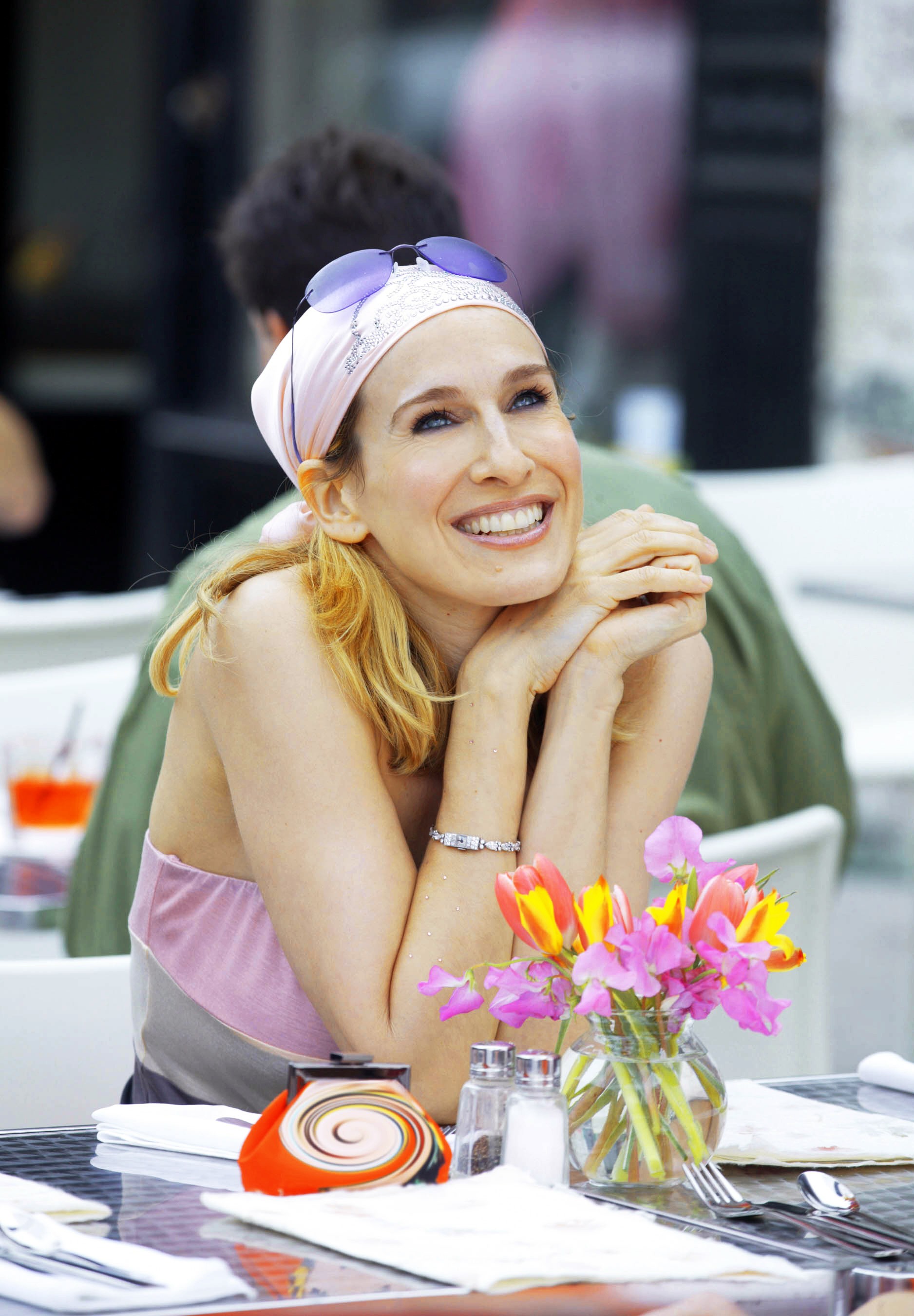 BUT. Yes, here comes the but: The the more I watch “Sex and the City” in syndication, the more I’m noticing how grating the ladies can be—particularly Carrie Bradshaw. I happen to really like the character, and I know it’s not news that she’s needy and self-centered, but the more I delve into the series, the more I realize she is—to use her words—kind of an asshole. An annoying asshole.

Which is great in a way—you want your characters to be flawed, even on a featherweight show like this—but it’s only recently become super-apparent to me how straight up grating, dense, rude, and crazy Carrie is at times.

And, for the record, I’m aware this is a fictional person I’m talking about. I’m also aware that I’m setting myself up for a number of “get a life, loser!” comments, but I’ll have you know I indeed have a life–it just involves watching a lot slightly dated reruns on TV. Hey, we all need a hobby.

Because it’s been 17 years that “Sex and the City” aired on HBO, I’ve amassed a superfan’s list (in no particular order) of reasons why I think Carrie Bradshaw is kind of an a-hole.

She sleeps with a man she doesn’t know—then complains he treated her like a prostitute.
She whines to Gilles, a handsome French architect she just met, that she’s “cash poor,” proceeds to have sex with him after knowing him for a day, then complains he treated her like a hooker when he leaves $1,000 on the nightstand. I think you treated yourself like a prostitute, CB.

She brings bagels to her injured BFF—and forgets cream cheese.
Nothing says self-involved like sending your boyfriend to help Miranda when she called you about throwing her neck out, but to come over with a few measly bagels without cream cheese or fixings is downright blasphemous.

She acts like going to her boyfriend’s country house is a form of capital punishment.
For the record, Suffern New York is literally less than hour away from Manhattan. She acted like Aiden was asking her to take the Fung Wah bus to West Virginia every weekend.

She says the bitchiest thing possible to a Brooklyn-bound Miranda
When Miranda’s glum about moving to Brooklyn and opines “why is living in Manhattan so fantastic?” Carrie dramatically pauses and says “because it is” instead of being a good friend and saying “hey, Brooklyn’s cool, too!” Ah, if only Carrie could see into the future.

She tries to order a cosmopolitan at a McDonald’s drive through.
Even as a joke, it’s condescending. And you’re driving.

She whines that Natasha “snubbed” her
The woman whose marriage you ruined ignores you in a restaurant, and you complain that she snubbed you? What was she supposed to do, come over and give you a hug? “I can’t believe someone in New York could hate me that much,” Carrie moans. Way to turn the girl’s failed marriage into something ALL. ABOUT. YOU.

She’s a writer but doesn’t know what ‘docent’ means.
When Charlotte says she’s gotten a gig as a docent at the Museum of Modern Art, Carrie—hard-up for money—says “What’s a docent?! I can docent.” 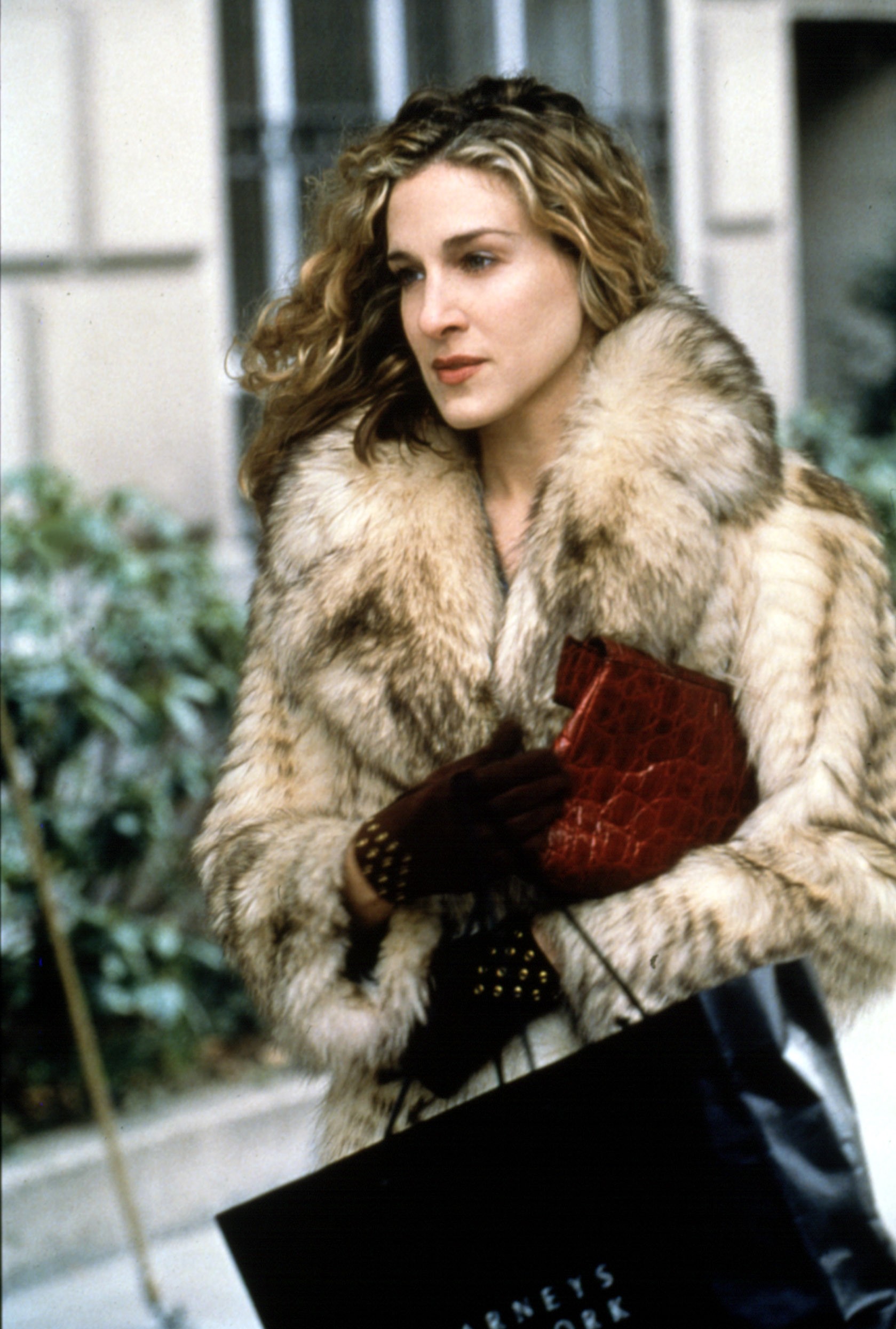 She thinks it’s okay to show up at Big’s ex-wife’s office.
Carrie makes an appointment to go see Big’s ex-wife without telling him—and lies that she’s interested in writing a children’s book about cigarettes. #Stalker.

She tries to get a bank loan by complaining she’s single.
When Aidan gives her the eviction notice, she goes to the bank to see about a loan. When she couldn’t get one, she behaves as if financial rules don’t exist and has the nerve to say to the banker “Linda… you’re single right?” Playing the lonely and poor card doesn’t work at a bank. You have no money, the end. And no banker cares you were anyone’s pick for city columnist, even over Pete Hamill.

She baits Big for $30,000.
When Carrie can’t buy her apartment, she shows up at Big’s office and asks him how he made his money, as if his advice was something Carrie could replicate in 30 days. She went there knowing he’d offer her the money, which he did. But then, she doesn’t even use it. Idiot.

She throws a full-on temper tantrum at Bungalow 8.
She went with Oliver—the handsome gay man she met twice who didn’t kiss her ass at the club like he did the other times they hung out. He dared to talk with someone else for one second, and Carrie threw a temper tantrum and stormed out. The more I watch this bratty scene as an adult, the crazier it is—what normal human leaves anywhere because your friend talks to other people? 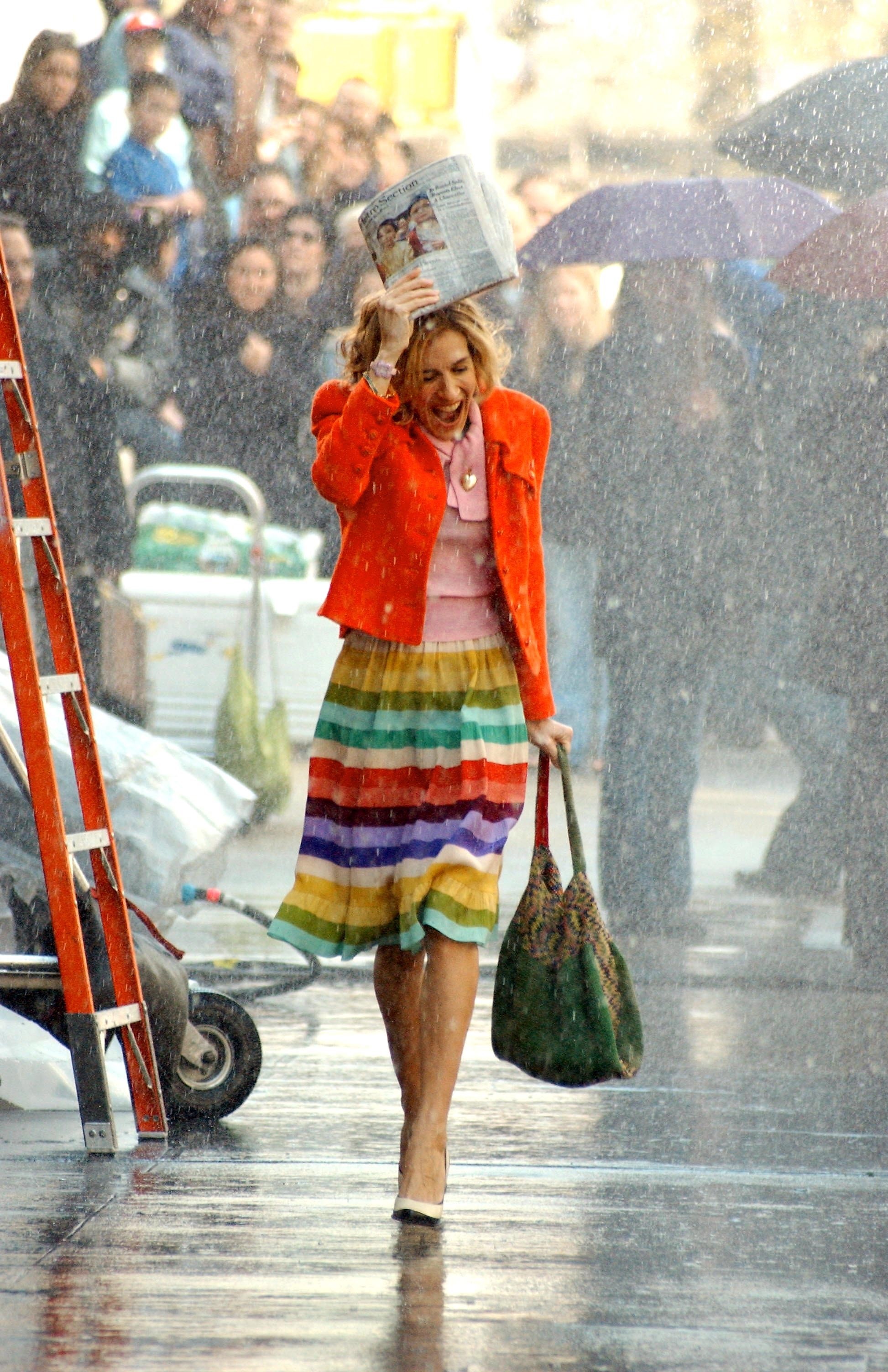 She doesn’t leave Aleksander’s apartment after he yells at her and her friends.
She declines Charlotte’s offer to share a cab uptown and sleeps in the Russian’s bed alone after he barks at her friends that he’s too busy to say hello. That’s just pathetic.

She lets the politician drive off to Staten Island without her, but then meets him a minute later.
She really needed to hear Miranda say she was scared of getting hurt again?

She calls all her boyfriends by nicknames.
Big, Berger, the Russian. Randall the Sandal Guy.

Carrie quips that the night is so chilly “for the first time in a long time, you need a blanket on your bed.”
Not to nitpick, but who doesn’t have a blanket on their bed at all times?

She won’t let Miranda talk about the fact that Robert said ‘I love you’ on a cookie
When Miranda is crying over the fact that she thinks she’s ruining her life by not being able to say “I love you” to Robert, Carrie says “the only thing you’re going to ruin is your night and mine.” Yeah, she says she was kidding, but it was still a self-centered, bitchy thing to say.

The entire candy striper situation.
Who role plays when their ex-boyfriend is recovering from open heart surgery? 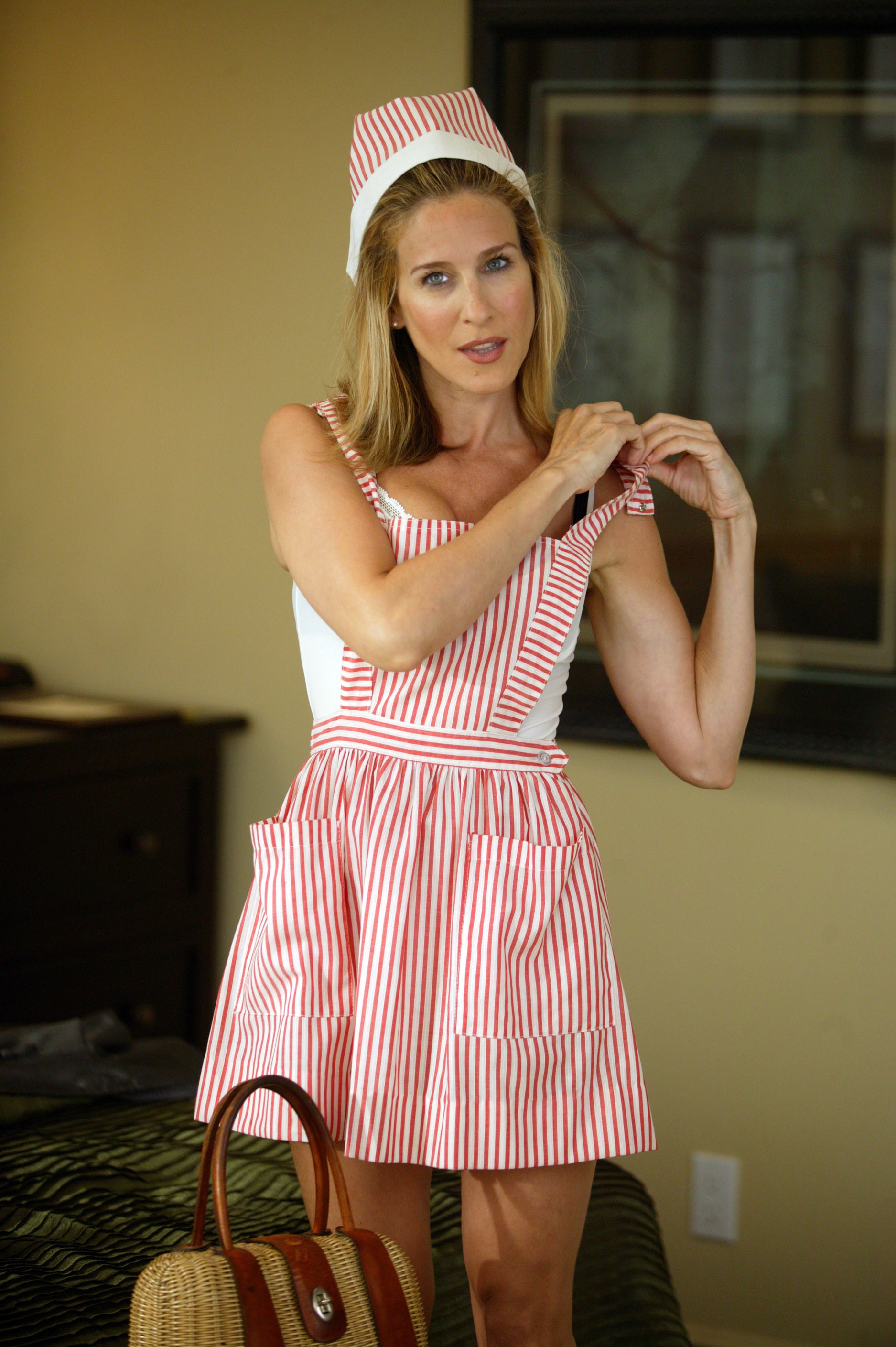 Carrie asks stuff like “are relationships the religion of the 90’s?”
Huh?

Showed up to Big’s church and demanded that she be introduced to his mother.
AFTER Big told her it’s something they do alone, and that he doesn’t want Carrie involved. #Creeper.

She doesn’t let Stanford come to drinks with the Russian.
When she’s excited to introduce her friends to Petrovsky, Stanford says he’s in for drinks on Sunday—but Carrie says “oh, I’m sorry sweetie, it’s just the girls this time.” Why?

She says the dumbest thing to Patrick, the alcoholic guy she likes.
When she finds out he’s in AA, she says that’s not a problem, and exclaims “I love alcoholics! I hope to be one someday!” Sure, maybe that was meant to show she can be awkward, but it’s still kind of an asshole thing to say.

She expects Charlotte to PAY for her apartment.
And gets super-nasty when Charlotte doesn’t offer her money—or her diamond ring.

She compares herself to a wild horse
That’s right Carrie, the reason Big isn’t with you is because you’re too complicated, too free-spirited and simply can’t be tamed. Actually, she was just the opposite while with him.

She says Natasha’s is an idiot for not knowing the difference between “there” and “their.”
But she’s no a genius either: When Carrie says she has 100 pairs of shoes costing $400 each, she quips it’s $4,000 worth of footwear. Miranda corrects her that it’s actually $40,000.

She “faints” at the opera, and acts like a condescending one-percenter at McDonald’s with the Russian.
Yes, Carrie: You’re so lowbrow that you make your boyfriend dance with you in a fast-food joint instead of going to the opera, after he got Oscar de la Renta to give you a dress. 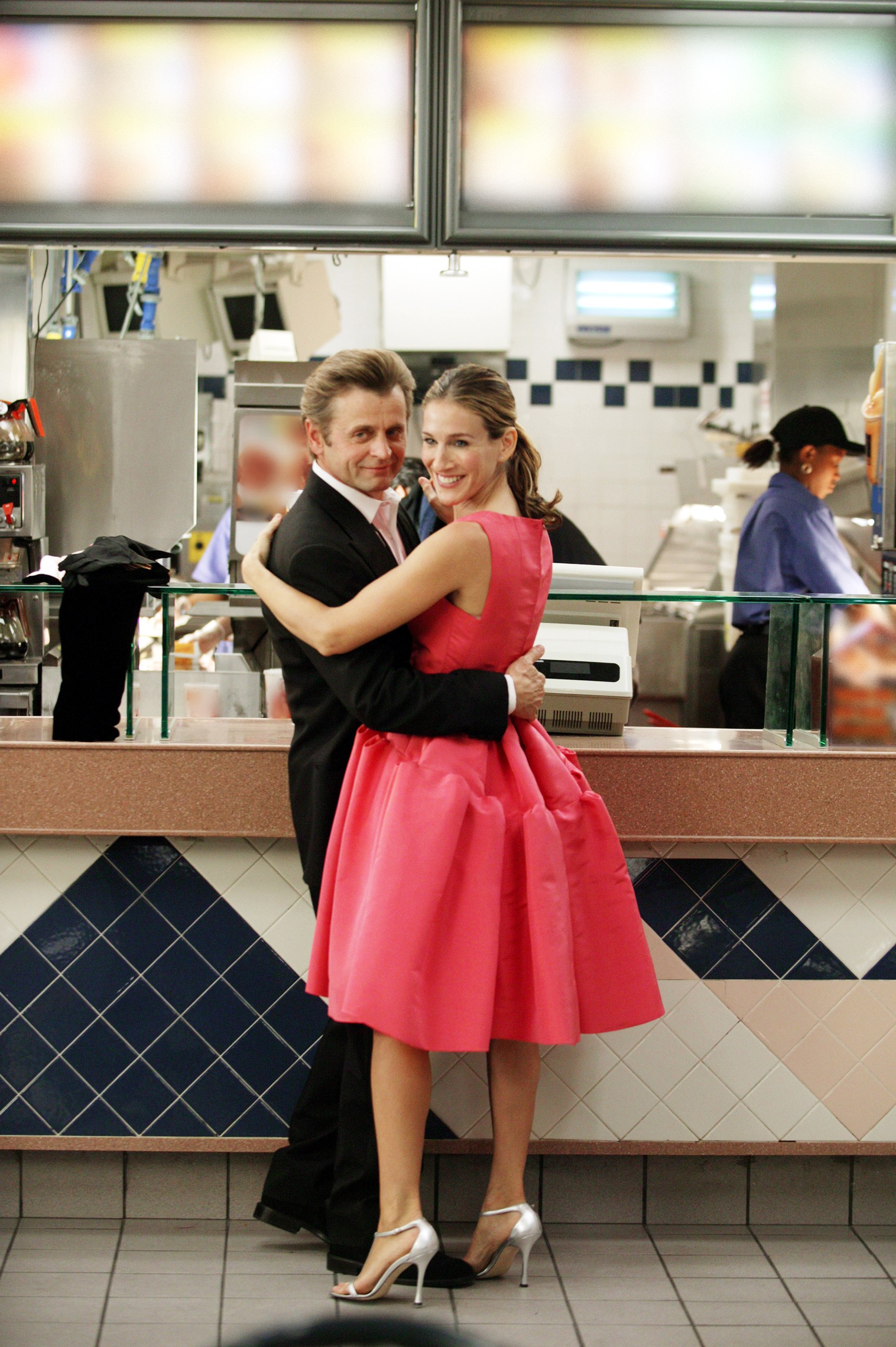 She ditches her friends for guys—and doesn’t call them to let them know.
She ditched Miranda’s for Big’s veal (which turned out okay, because that’s when she met Steve), and didn’t go to brunch because it was “cold out” and the Russian was making her tea.

She tells Aidan she’s been cheating on her best friend’s wedding day
Can’t let one day be about your friend, Carrie.

She makes Miranda feel worse about being cooped up with a newborn.
When Miranda is crazed with her new baby, Carrie breezes in and rambles on about herself, then condescendingly says “You’re a mother,” when Miranda says she can listen now. THEN Carrie makes a crack about the freedom to go anywhere she wants when she leaves because “It’s New York.” Rude.

She asks Susan Sharon if she can return the birthday gift she got her for cash.
“I could really use the money.” Um, who asks that?

She ditches Charlotte at the opera because Big’s in the audience
That was more than a little hysterical, Carrie.

There you have it. My list. If I’m missing something, let me know in the comments below!