From the start of Matt James’ Bachelor season, fans wanted to know as many Bachelor 2021 spoilers about Rachael Kirkconnell as they could to find out how far she made it on Matt’s season.

Rachael was one of 32 contestants who met Matt, a 29-year-old real estate agent from Raleigh, North Carolina, on the Monday, January 4, premiere of The Bachelor season 25. Matt, who is the best friend and roommate of Bachelorette alum Tyler Cameron, was announced as the season 25 Bachelor in June 2020. Unlike the previous Bachelors, Matt is the first Bachelor since Brad Womack in 2011 to not be a former Bachelorette contestant. (Though he was cast for Clare Crawley’s season of The Bachelorette in 2020, he never made it on the show, as he was chosen as the Bachelor soon after.)

As for if Matt’s Bachelor 2021 winner has been revealed, Reality Steve can confirm that she has. (Read on to find out if Rachael is Matt’s winner.) Reality Steve revealed Matt’s winner prior to the premiere of his Bachelor season in January 2021. According to a source for OK! magazine, producers were “livid” that the end was leaked. “Everyone on the show has been reminded that they signed non-disclosure-agreements,” the source said. “The show’s PR department strategically leaks information and teases each season to get publicity and viewers excited. However, the number of unauthorized leaks has gotten out of control. To have the winner leaked before the first episode even airs is terrible. Producers are livid,” the source adds. 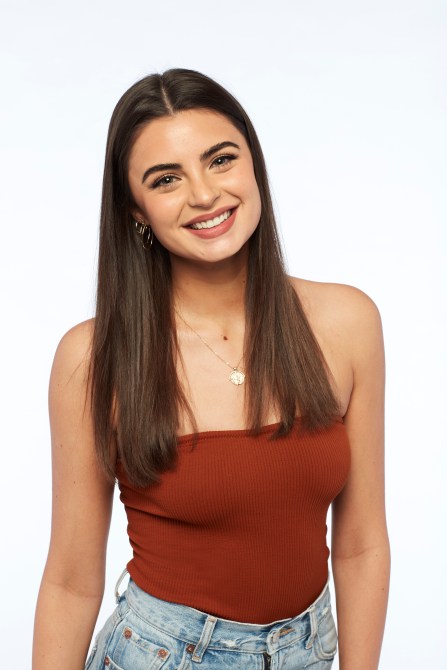 Her bio continues, “She wants to look back on her life when she’s old and feel like she has made the absolute most out of every single day. Nothing makes her happier than a good movie, good wine and charcuterie boards. Rachael needs a man who will make every day with her something to tell their future children about and says, “At the end of the day, love is what makes your life more special than others. Life can be hard and really difficult and dark at times, but if you have someone by your side that loves you more than they love themselves, that makes it all worth it in the end.”

For her fun facts, Rachael lists the following:

– Rachael’s favorite way to pass the time is by doodling.

– Rachael is very neat with organization and cleanliness, and messy with plans and schedule.

What is Rachael’s job?

According to her Bachelor bio, Rachael works as a graphic designer. She graduated from Georgia College & State University in Milledgeville, Georgia, in 2019, according to her Instagram.

Does Rachael win The Bachelor?

So does Rachael win Matt’s season of The Bachelor? Well, if you must know, yes, she does. Matt’s final four who have Hometown Dates are Serena P., Bri, Michelle and Rachael. His final four are eliminated in that order, which leaves Rachael as Matt’s winner. For more detailed spoilers about Matt’s winner, click here.

Though Rachael received his final rose, Matt did not propose to Rachael at the final rose ceremony and they’re not engaged.  Reality Steve confirmed in a tweet in February 2021 that Matt and Rachael had broken up after Rachael’s racism controversy in February 2021, the celebrity gossip Instagram account @DeuxMoi  also received several tips that she and Matt split, with some claiming that part of the reason for their breakup was Rachael’s scandal. According to Reality Steve, the split came after their Valentine’s Day weekend together.

Matt confirmed the split on the “After the Final Rose” special on March 15. “We’re not [together],” Matt told guest host Emmanuel Acho. “It’s heartbreaking. If you don’t understand that something like that is problematic in 2018, there’s a lot of me that you won’t understand. It’s as simple as that…You know what was a long time ago? Plantations.”

If you’re not caught up on Rachael’s racism controversy, here’s a recap: In January 2021, Rachael came under fire after TikTok user @maddyybierster, a former of high school classmate of Rachael’s, claimed that she was bullied by Rachael for dating Black men. “girlieee, remember when you bullied me in high school for liking black guys???” the user captioned a clip of Rachael on a date with Matt. After the TikTok went viral, the user shared several DMs from other women who claimed to have similar experiences with Rachael when it came to dating Black men.

A TikTok video by @feministmama then went viral in January 2021, where the user exposed Rachael for liking racist social media posts and associating herself with controversial groups. The TikToker shared three social media screenshots that Rachael liked: one of two women in front of a Confederate flag, one of three women dressed in sombreros, ponchos and mustaches, and one of a woman in a “Make America Great Again” hat. The user also claimed that Rachael hasn’t voted in the past four general elections, sharing a screenshot of her voting history. @Feministmama also shared screenshots of Rachael‘s parents supporting Donald Trump and other Republican politicians. According to the screenshots, her father donated to WinRed, a fundraising platform that supported Trump in the 2020 Presidential Election.

Matt later responded to the racism claims around Rachael in an interview with Entertainment Tonight in February 2021. “I have not spoken to anybody since the show ended, but I would say that you have to be really careful about what you are doing on social media,” he said at the time. “Rumors are dark and nasty and can ruin people’s lives. So I would give people the benefit of the doubt, and hopefully she will have her time to speak on that.”

According to a March 2021 report by The Sun, there isn’t a chance for Matt and Rachael to get back together either. The newspaper reported in March 2021 that Matt “blindsided” Rachael with their split and “refuses to speak” with her.

“He’s ignored her messages and won’t provide any answers from when he blindsided her with the split,” a source told The Sun, claiming that Matt has “shut her out.” “The breakup came completely out of nowhere. He stood by her throughout the drama until he suddenly chose not to.”

According to The Sun’s source, production “got to Matt” and “ruined” his relationship with Rachael. “He listened to producers who initially supported Rachael but became controlling and more unsupportive of them after Chris Harrison’s interview with Rachel Lindsay,” the source said. “Once the network started getting canceled and not just Rachael, their tone changed. It seems they got in his head and convinced him that his image would be saved if he dumped Rachael. So that’s what he did.”

Where is Rachael now after The Bachelor?

After The Bachelor finale, Rachael took to her Instagram to reflect on her time on the franchise. In her post, which included behind-the-scenes photos with her cast mates and Matt, Rachael revealed that she still considers Matt the “love of [her] life” and has hope that they can work things out.

“just when you think you found your way, life throws you onto a new path,” she wrote. “it’s unpredictable, unexplainable, and things might not go the way you hoped for. while i certainly wish things turned out differently, i also believe there is a reason for everything. we may not be able to control situations thrown our way, but we can control how we deal with it, and i believe good can come out every circumstance.”

She continued, “this was supposed to be a monumental season, and one of the biggest disappointments has been the overshadowing of these beautiful women and their stories. they are some of the strongest, most brilliant, most extraordinary women and i was lucky enough to have met them. you all deserve more, but i promise to always stand by and support each of you in any way i can.”

In her paragraph about Matt, Rachael expressed how she’s “hopeful” Matt will take her back and how she thinks their relationship is “meant to be.” “i knew from the first night i met matt that he was something special, and i was praying to share something exceptional between the two of us if that’s what was meant to be,” she wrote. “while i never expected this outcome, i respect his decision completely. of course i wish circumstances were different, but i still feel blessed for the time we did have together and the memories we made. i got to fall in love, and i truly believe he was the love of my life. he will always hold a piece of my heart. i’ll always be hopeful and believe what’s meant to be will be.”

Rachael ended her post by thanking her 500,000-plus followers for joining her on her Bachelor ride. “at the least, i hope tonight sparks conversations and a level of understanding,” she wrote. “i hope it opens your mind to unlearning bias, to educating yourself, and gives you the push to initiate change. there are so many actions you can take, but i believe it starts within the small corners of your life, and having these conversations with those around you. it can’t happen overnight and will be a never-ending ride, but i encourage you to take the leap and make a difference. we can change the world, together. i love you all and here’s to new beginnings.”