At 95 years old, Queen Elizabeth‘s health is on the minds of everyone in Buckingham Palace, including her doctors, which is why they advised he to make a significant change to her routine due to the “stage” of “life” she’s in.

Two sources told Vanity Fair on Thursday, October 14, that the Queen‘s doctors have advised her to not drink alcohol except for special occasions so she can be as healthy as possible for her fall schedule of royal engagement and her Platinum Jubilee, which celebrates her 70th anniversary of ascension, in June 2022. Though the Queen isn’t a “big drinker,” the medical advice does mean that the Queen will have “give” up her daily evening drink of choice: a martini. “The Queen has been told to give up her evening drink which is usually a martini,” a family friend told Vanity Fair. “It’s not really a big deal for her, she is not a big drinker but it seems a trifle unfair that at this stage in her life she’s having to give up one of very few pleasures.”

The medical advice comes days after the Queen was seen in public with a cane for the first time in 17 years. The Queen was photographed with the cane on Tuesday, October 12, when she attended the Service of Thanksgiving at Westminster Abbey in London to mark the Centenary of the Royal British Legion. In photos from the event, the Queen could be seen with a black cane with a light-colored handle as she wore a deep blue dress coat with large gold buttons and a purple wide-brimmed hat. The Queen accessorized the look with Queen Mary’s Russian brooch, which featured sugarloaf cabochon sapphire. The piece of jewelry was a wedding gift to Queen Mary from Empress Marie Feodorovna in 1893. The Queen inherited the jewel from her grandmother in 1953.

The Queen was photographed with a cane again two days later at the opening ceremony of the Sixth Session Of The Senedd in Cardiff, Wales, where she was seen in a pink coat with a matching wide-brimmed hat. A source told Page Six at the time that the Queen used the cane “for her comfort” and not any specific health issues. 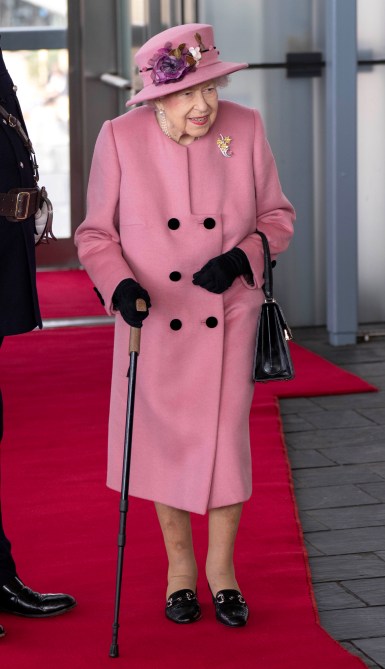 According to the site, the last time the Queen was seen in public with cane was when she recovered from knee surgery in 2003. CNN reported at the time that the Queen, who was 76 at the time, underwent knee surgery after she twisted her knee while walking on uneven ground during a visit to the Newmarket race course in eastern London before Christmas. The minor operation took 45 minutes to remove torn cartilage from the Queen’s leg. CNN also reported that the Queen was “fully active again within a few weeks.”

In 2018, The Daily Express reported that the Queen had been complaining about pain again in her knee but refused to undergo surgery. “She was talking to friends at the Chelsea Flower Show and said her knees were playing up,” a palace source told the site at the time.. “But she is reluctant to have an op due to the time it would take to recover. She is incredibly brave.” The insider continued, “People from her and Philip’s generation battle through problems and carry on. And Her Majesty doesn’t like to cause any fuss.”

For more about the British royal family, check out Sally Bedell Smith’s 2012 biography, Elizabeth the Queen: The Life of a Modern Monarch
. The New York Times bestseller, which includes the “real story” behind several storylines featured in Netflix’s The Crown, follows Queen Elizabeth II’s life from her childhood as the “heiress presumptive” to her father, King George VI; to the moment he et her husband, Prince Philip, when she was 13 years old; to her ascension to the throne at 25 years old in 1952. Elizabeth the Queen, which also includes interviews with Buckingham Palace sources and never-before-revealed documents, provides a deep dive into the Queen’s legacy as one of the most famous monarchs in recent history.