A royal first. The Queen broke royal tradition with Kate Middleton at a Remembrance Sunday service on November 8.

Queen Elizabeth II, along with other British royal family members, gathered at the Cenotaph, a monument in London, on Sunday to pay tribute to those who lost their lives in battle. The Queen’s grandson, Prince William, son, Prince Edward, and daughter, Princess Anne, were among royal family members who placed wreaths at the Cenotaph. Meanwhile, the Queen, Kate Middleton and Camilla Parker Bowles watched the service from the balconies of the Foreign and Commonwealth Office.

At previous Remembrance services, the Queen was accompanied by at least one member of the British royal family on the balcony. However, this year, the Duchess of Cambridge and the Duchess of Cornwall stood on a separate balcony a few feet away from the Queen, while the monarch stood on her own balcony with her lady-in-waiting, Susan Rhodes. According to Insider, it’s royal tradition to stand in order of rank at the Remembrance service. In 2019, the Queen stood on the same balcony as Camilla and Kate, who are the two future queen consorts, given that their respective husbands, Prince Charles and Prince William, are the closest in rank to the Queen and are first and second in line to the throne. Meghan Markle, Sophie, the Countess of Wessex, and Tim Laurence stood on a separate balcony. 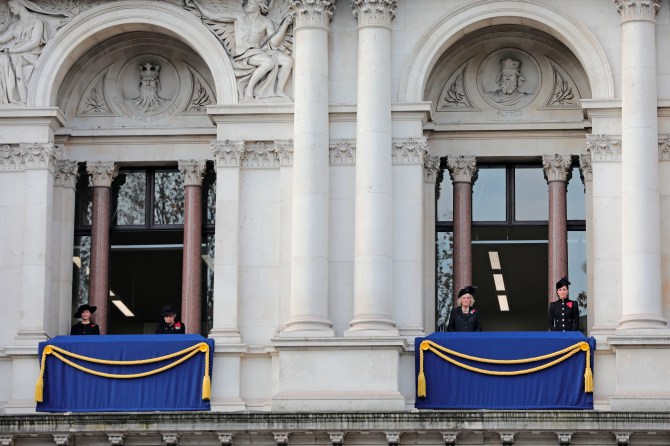 Per The Mirror, the Queen made an exception for the royal tradition this year because of the current COVID-19 pandemic. Given that the balcony isn’t large enough for the Queen to share it with Kate and Camilla at a safe distance, the Queen—who is 94 years old, which puts her in the high risk category for COVID-19—decided to stand on a separate balcony. The Royal Central reported that the Queen’s lady-in-waiting was chosen to stand with her because the two have quarantined together. “Mrs. Rhodes, who is believed to have formed part of ‘HMS Bubble,’ accompanied Her Majesty on the balcony,” the Royal Central reported. “As Mrs. Rhodes has been isolating with the 94-year-old monarch, it was much safer for her to accompany the Queen as opposed to somebody who lives in a different household.”