Back in the summer of 2019, I was in love, excited about my future and ready to move into my dream apartment with my dreamy boyfriend. Cut to January 2020—I’m heartbroken, and as it turns out, my handsome, charming, sensitive (now ex!) boyfriend turned out to be shady AF. As much as I’d like to block him on my phone and in IRL, there’s one major reason why I can’t: I’m quarantined with my ex during the coronavirus outbreak, so now we’re stuck together indefinitely.

I could wax poetic all day about the plethora of reasons why our two-year relationship came to a sudden halt, but the straw that broke the camel’s back was when my best friend spotted him out to dinner with another woman. I fled our apartment before he even got home that night, and didn’t even leave a note.

I went radio silent, fully expecting him to show up and declare his undying love for me. He didn’t. Still, while we were officially done from an emotional standpoint, there was one thing keeping us tethered to one another. With a New York lease locked in until July, and neither of us able to afford rent without the other, we concluded that continuing to live together for the time being would be the most reasonable thing to do. The convenience would outweigh the discomfort—right?

We joke about things feeling “just like old times,” even though we both know deep down that quite the opposite is true.

Utilizing ages-old coping mechanisms, I tried to rearrange my life to signify a new chapter. I cut off all my hair, lost weight, started going to work earlier and seeing my friends more, if only to spend less time in our apartment. But as time went on, whispers of the coronavirus and an impending pandemic grew louder and louder, until finally New York City was in virtual lockdown. As my ex developed flu-like symptoms, I pleaded with him to get tested for COVID-19. Then, like millions of others, I was sentenced to work from home indefinitely, and our 24/7 quarantine cohabitation began.

Two months after breaking up, my ex and I are spending as much time together as when we first started dating. Aside from one major screaming match (which, honestly, we probably needed to have), to be completely honest, we’re getting along really well, for many of the same reasons we worked as a couple. We like the same TV shows and food—we’ve already binge-watched the entire second season of Succession, and frankly, it was delightful!  We fart, we laugh, we order Shake Shack. We joke about things feeling “just like old times,” even though we both know deep down that quite the opposite is true. 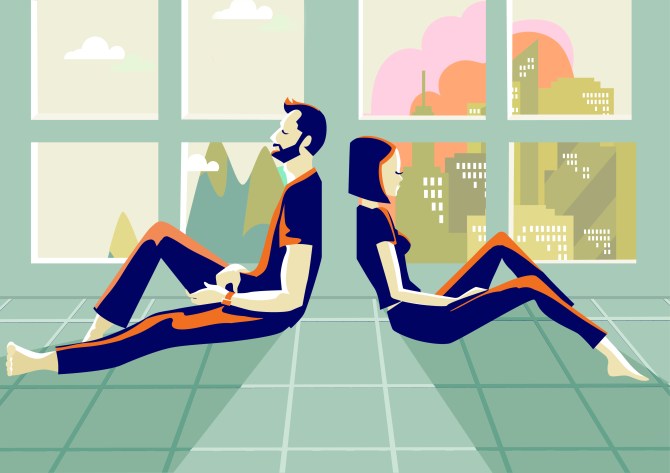 Don’t get me wrong; I’m thrilled that we’re getting along during these strange and uncertain times, but I can’t deny that it makes me miss having my ex as my significant other. I’m trying to figure out how to get over someone I am still in love with while spending every waking moment with him, and that’s not easy. Yes, we still argue about bullshit, but there are moments when we’re sitting on the couch and all I can think about is how badly I want to kiss him. I can’t help but wonder if he’s feeling the same things, and every time he adjusts his position on the couch, I can’t help but wonder if it’s an attempt to control his instinct to embrace me—or an attempt to get away from me. My brain is at war between these two perspectives.

When two people go from connecting intimately to being physical strangers, something as simple as a hug or brush against the knee can feel weighted. The romantic component of our relationship is gone, and in its place I’ve developed a deep sense of longing. But as this quarantine drags on, things get easier and easier. There is still a quiet part of me that wants to resolve our issues and get back together, but a much louder part of me knows that’s not the right answer.

I’m trying to figure out how to get over someone I am in love with while spending every waking moment with him.

During this time, I’ve amassed a lengthy list of Do‘s and Don’ts for living with your ex, all based on my own very real experiences. Do put on a great outfit every day to maintain a level of normalcy (and remind your ex that you’re still hot af). Don’t divulge your deepest feelings to your ex-partner while drunk on a poorly thought-out combination of tequila and red wine. Do sleep solo on the couch, in an unoccupied bed, or virtually anywhere besides the same bed. Don’t suggest that your ex’s lack of emotions means they never cared about or loved you at all. Do be kind to yourself—you never saw any of this coming. Don’t forget that you are worthy of love.

What will happen when life resumes and things go back to normal? The best outcome, as I see it, is that our time in quarantine together helps us develop a healthy, lifelong friendship. The worst? We part ways as soon as this thing is over and figure out how to handle our lease. For now, I am practicing ways to be a friend to my ex, rather than a partner. More importantly, though, I’m focusing on my personal growth. I’m choosing myself over him. And that won’t just help me during quarantine, it will also get me through whatever happens next, too.